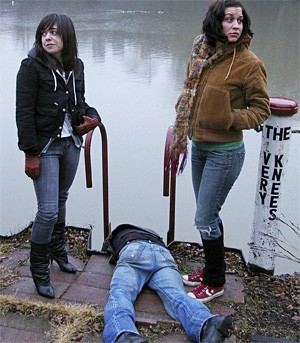 Like that unruly kid in the back of the class who just can't contain himself, there's an unbridled sense of purpose about the Very Knees. The local indie-rock group's noisy clamor resonates in a shambling wobble of unwavering pluck and natural charm.

You can hear it when frontman David Petrovich sings, "I have drugs at home/And I'm taking them tonight" over a skeletal, maraca-fueled beat. And it's there when he dispassionately demands, "Show me your scars/Show me your back/Show me your fur-coat friends in unmade beds" in "Party Hats," which recalls LCD Soundsystem, long after it lost its edge and began raiding ashtrays for discarded butts. "Leave your leftovers," sings Petrovich. "I'll eat what I can."

Petrovich looks indie-rock skinny on a recent frigid Sunday morning, a long tangle of black hair and club-tanned pastiness clad in a bootleg Prince T-shirt. There's a tattoo on the inside of his left arm that proclaims "The Perfect Guy." He's sucking down java at a Tremont coffee shop, while bassist Brittany Hudak nibbles on a banana. She places the fruit's sticker on the front of drummer Cindy Ciulla's knit cap.

"If she's the teen, then you're the breadwinner," offers Petrovich.

"I'm like the dad, and you're like my third wife," says Hudak. "And Cindy has to accept you."

Ciulla is clearly the most childlike of the trio, bending over her cup, slowly slurping the whipped cream from the top of her Costa Rican. Tired of "drummers that flake out and disappear," Petrovich recruited the fellow Beachland bartender six months ago for his band. Her drum kit is still being assembled from a hodgepodge of pieces left behind by bands that played the Beachland over the years. Her drumming is a work in progress too. "I don't know what I'm doing," she says.

Hudak joined the Very Knees a little after Ciulla. Petrovich initially approached her about playing keyboards, but after listening to the songs, Hudak told him she wanted to be the bassist. "A lot of them are rockers, and they need that boom," she says.

The Very Knees' history goes back a couple of years, to an auspicious debut at Pat's in the Flats. Petrovich broke his leg during the second song. Determined to prove his showman mettle — after all, this was the band's first-ever gig — he finished the set. "I landed really funny," he recalls. "I was in a lot of pain." After the concert, he spent the rest of the night waiting in the ER.

During his downtime, Petrovich wrote many of the songs that'll show up on the Very Knees' debut album, which is due sometime this year. Most of the tracking is already done. "Then we'll send it away to a professional songwriting team, like the Matrix, to add that professional sheen we need," he laughs.

Indeed, the Very Knees' unvarnished rumble isn't all that polished or precise. But it often crackles with vitality. "Connect the Dots" careens with distortion-powered thrum behind a lo-fi sound that recalls '80s alt-rock heroes like the Lemonheads and Sebadoh. The 160-second blast is unabashedly catchy, with guitars churning a jagged rock-candy riff as Petrovich wails, "The anesthetic's wearing off, and how!" over a pulsing backbeat.

"It's easy to fall apart and wake up at strange addresses while bottoming-out is occurring — and you can see it happening to everyone around you," says Petrovich, explaining the inspiration behind many of the band's songs.

"God's Godless Creatures" pays tribute to people who look, talk, and smell like Petrovich and his bandmates. The song samples an activist's rallying cry — "War is the ultimate mortal sin. There is no such thing as a just war. War cannot end terrorism, because war is terrorism" — while a swirling drone and jangling riff propel the tune. Against this backdrop, Petrovich sings about bridging guilt, shame, violence, and irrationality, and muses on their overriding tendency to distance people from reality. "I guess I'm trying to say that life would be so much easier if ethics didn't get in the way," he says. "I also wonder why we're so frail and so prone to neuroses and misery."

If anyone's qualified to ask and answer this question, it's the Very Knees. Because, really, who better to hold forth on human frailties than three bartenders — Hudak pours at Prosperity — who've had plenty of opportunities to study neuroses and misery up close. "We'll be serving you in the near future," laughs Hudak.

As we bundle up and say goodbye, we're not sure whether she's referring to beers or spiky pop songs. Or both. Either way, we'll gladly drink whatever they're offering.