At the Rock Hall: Time has turned a music producer's snapshots into a portrait of an era.

October 04, 2001
comment
From the Other Side of the Glass Circular Gallery of the Rock and Roll Hall of Fame and Museum Through early 2002 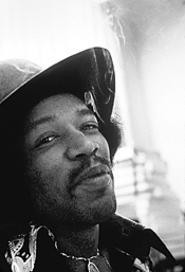 Seriousness and play -- two complementary forces of the creative process -- are reflected in record-producer Eddie Kramer's photo exhibit, From the Other Side of the Glass, opening today at the Rock Hall. There's Jimi Hendrix, grinning broadly behind a giggling Steve Marriott, singer-guitarist for the bluesy British rock group the Small Faces. A contrasting panel of color shots shows Hendrix and his Experience laboring earnestly at their album, Electric Ladyland.

As producer for the likes of the Beatles, the Rolling Stones, Led Zeppelin, Traffic, and Hendrix, Kramer coaxed musicians into creating unforgettable sounds. His photographic images are equally unforgettable. But while Kramer knew the music that came out of those sessions was good, he didn't give his snapshots much thought.

"A few of these photographs have been in some of the Hendrix reissue albums, but I kept the others to myself," he says. "Last year, I was at the Rock Hall and showed the [directors] the photos. They said, 'We've got to have an exhibition!' I had no idea they were good, quite frankly."

The aesthetic impulses that guided his musical work also inspired his shutterbug enthusiasm. "I loved taking pictures -- and especially loved photographing interesting people. And believe me, there were lots of those walking in and out of that studio: Jimi, the Stones . . . "

The musicians didn't mind Kramer's hobby. "As far as the camera was concerned, they didn't give a damn. I was working every day with them, so it was no big deal. 'Oh, Kramer's got his camera.' They just ignored it."

The freewheeling life of the rock hero is evident in shots of a pastoral Led Zeppelin session, circa 1972, and in those of Hendrix joshing with Kramer and other musicians. "He was a very funny guy," Kramer says of Hendrix. "He'd keep the session loose that way. It was part of his personality: He was an incredibly bright guy, with a wicked sense of humor."

As far as Kramer could tell, there was no rivalry among the musicians. "I have pictures that aren't even in the show. There is one of Mick [Jagger] and Janis Joplin together, for instance. Everyone liked and respected each other. When we were recording at Olympic Studios [in London] during '67 to '68, many times the Beatles would drop by on a Stones session. It was all about music, y'know. It ain't rocket science!"

In his 40-year-plus career, Kramer learned that superstar artists share certain characteristics: "absolute dedication, attention to detail, tremendous passion, and laser-like concentration." His shots of a determined Keith Richards and a glowering John Bonham capture those traits. "All these are aspects of great artists. When you're in that league, that's what it's about."