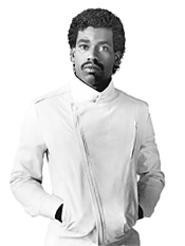 When he was only 13, Kurtis Blow sneaked into his first disco at a Harlem nightclub. Pete "D.J." Jones was working the turntables, and J.T. Hollywood was on the microphone. Captivated by the way Hollywood moved the crowd, Blow knew then that he had found his calling. While he admits that the disco ball hanging from the ceiling was "traumatizing," he still wanted to be behind the microphone. He found he had a talent for spinning records, dancing, and eventually for rapping -- an art form that was still developing when he started performing in New York clubs in the late '70s.

"When you say hip-hop culture, it was different from the disco era that was happening at that time," he says. "It was a mutation of the disco era. It was like grassroots." Early rappers performed in community centers and parks, creating music that was "like funky, funky, funky. It was real. It was raw."

Blow was kicked out of high school for selling drugs ("I was just a kid from Harlem, you know, trying to survive and make a little money on the side. But the dean used to always chase me around the school, and he had it out for me. They used to call the dean Eliot Ness, and I was Al Capone"). But he eventually attended City College of New York, where he became program director at the college's radio station. His college years were some of his most prolific, a time when he perfected his musical craft and met the likes of Grandmaster Flash and famed hip-hop producer Russell Simmons.

His big break came in 1978, when J.B. Moore and Robert Ford, two writers from Billboard magazine who were looking to write a rap song, happened to see Blow and Grandmaster Flash cut up the stage at the ballroom of Manhattan's Hotel Diplomat. With Moore and Ford as his producers and Simmons as his promoter and manager, Blow cut his first single, "Christmas Rappin'," just in time for the holiday season. He struck a deal with Mercury, becoming the first rapper to sign to a major label, and released his self-titled debut in 1980. The album's first single, "The Breaks," was certified gold and went to No. 4 on Billboard's R&B singles chart. The funk-twang guitar, glitzy keyboards, and simple lyrics became Blow's signature sound.

But after 1984's Ego Trip, which spawned "Basketball," one of Blow's biggest hits, his music started to sound stale, especially compared to rappers like Run D.M.C. and Public Enemy, who were spearheading hip-hop's political movement. Even when Blow tried to get political, as he did on America, his message was hardly as radical as that of Public Enemy, who declared Hollywood racist and disavowed American icons like Elvis Presley.

"Whenever you get guys who are too political, they're a threat to national security, and you know what happens after that," Blow says in defense of America. "So we have no heroes. All the heroes that I grew up with were drug dealers and pimps, because a lot of our heroes were killed, like Martin Luther King, Malcolm X, and J.F.K. If you get too pro-black, you die. It's just the world we live in."

Blow kept recording until the late '80s, and although flamboyant, he never cursed and always tried to project a positive image. By the time N.W.A.'s "Fuck tha Police" was making headlines for rap's West Coast gangsta revolution, Blow was sorely out of fashion.

"I think it was just a natural progression," he says. "Hip-hop wanted to become more real, as real as real can get. It's like sometimes it gets unreal. But a lot of guys live like that, and that's the way they talk. It's something to see; it's something to witness. But that's just one aspect of the life."

These days, Blow views himself more as a hip-hop historian than a modern-day rapper. In 1997, he produced, released, and wrote the liner notes to Kurtis Blow Presents the History of Rap: Volume 1. Two more volumes have followed, each embracing the roots and history of hip-hop culture. Blow uses the records to explain hip-hop's genesis, beginning with the poor, predominantly black R&B musicians of the south Bronx. He's making the first volume into a documentary film.

Even if Blow doesn't endorse the violence of gangsta rap, he still understands its place in history. Still, he envisions the old-school tradition becoming relevant once again.

"I think it's needed and overdue," he says. "I talk to people every day who want something like that to happen. But look, it's easy for guys to sit around talking about, you know, how life is and what's real, and let's keep it real. But for somebody to get up there and tell people how it should be, that's a tough job, you know? I tried to do it, and when you try to do that, you don't sell a lot of records."