Ladies of the Left 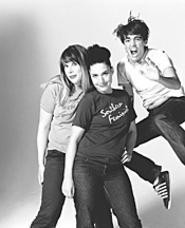 "You know that feeling when you see [President Bush] on TV, and you feel like you're gonna throw up?" Le Tigre's Kathleen Hanna asks, sprawled across the conference-room floor of her publicist's Manhattan office. "I feel like I can't even look at him anymore because I get so physically freaked out and upset. I don't wanna be one of those 'tune out, turn off' people, but I don't even know if I can mentally and emotionally take watching him lie anymore. It makes me so angry."

Hanna's confession is noteworthy mainly for the improbability of her tuning out and turning off anytime soon. After all, the ponytailed punk provocateur has for over a decade battled foes more diabolical than Dubya: the institutional sexism, primarily, that often dissuades young women from blazing their own trails through art or film or music (or accounting or selling insurance or trash-collecting).

Hanna formed Bikini Kill, the most visible product of the early '90s riot-grrrl movement, to disrupt that orthodoxy, juicing go-go garage rock with sarcastic drill-team choruses and enough teen spirit to inspire a nation of fanzine-writing followers. After Bikini Kill ran its course -- just as the potency of the band's pop began to match that of its agitprop -- Hanna made a dark solo record as Julie Ruin, then formed Le Tigre in 1998 in New York with Johanna Fateman and experimental filmmaker Sadie Benning (whom J.D. Samson subsequently replaced). The idea was updating Bikini Kill's scrappy D.I.Y. punk rock with the tools of today's underground: samplers, digital recording equipment, homemade dance beats, sarcastic drill-team choruses.

The new This Island is Le Tigre's third album, as well as its first for major label Strummer, the Universal imprint former Capitol chief Gary Gersh founded last year, which also counts the Rapture and the Mars Volta on its roster. As usual for the trio, it's full of amped-up political sloganeering set atop the kind of bumptious electropunk you'd expect from longtime alt-culture denizens grown impatient with their cohorts' apathy. And as major-label debuts go, it features the typical array of souped-up production perks: Former Cars frontman Ric Ocasek gives "Tell You Now" a sleek Blade Runner sheen, a cover of the Pointer Sisters' "I'm So Excited" gets over thanks to a deliciously trashy Eurocheese synth line, and "New Kicks" does the left-wing near-impossible, pairing chopped-up field recordings from a New York City peace march with an indie-kid disco throb that won't make you regret your liberal-arts education.

Don't lay all the credit for the bigger sound with Universal bigwigs, though. After recording 1999's Le Tigre and 2002's Feminist Sweepstakes on the cheap in North Carolina (where their recently shuttered label, Mr. Lady, was based), they decided to do the bulk of the work on their next album at home in New York, so they pooled the proceeds from touring and bought themselves three ProTools Mboxes.

"It gave us a lot of a room to do things that we really wanted to do," Samson says. "Like, it was hard for us to restructure anything without going to North Carolina. And we were like, 'That's so dumb.' And that's sort of how it started, is that we wanted to be able to restructure things." Eventually the home-recording software took on a larger role in the band's songwriting process; they'd assign each other homework, the fruits of which they'd compare at band practice later.

"I think it made it more collaborative," Hanna says of working with the technology. "It was way easier, because we all have hard drives and we can go to our apartments. Kind of the same way as before, but it was even more intense. Now we had the ability to be like, 'Oh, I like this thing about the thing you were doing, but I would prefer if the pattern was a little different.' So I could take one of J.D.'s beats and use the same exact structure for one part of the song and then change it up for another part of the song and add stuff to it."

It's a natural progression for a band as independent in spirit as Le Tigre, and if This Island bears the faint whiff of self-indulgence, you can bet that further work in this setup will pay off handsomely. Yet despite ProTools' handy facilitation of the 3 a.m. burst of bedroom inspiration, Le Tigre admits that working on its own didn't necessarily speed up the completion of This Island, which saw several release dates come and go before hitting stores on October 19.

"It's not like we were just hanging out, eating up our advance," Fateman laughs. This is true: Finally hiring a manager, finding a record label, and playing live shows to keep a still-Universal-less Le Tigre Inc. in business competed closely with the actual work of writing and recording. ("We had to keep touring to pay our rent, too," Fateman sniffs.)

Still, "we really wanted this record to come out before the election," Samson says, "because we feel like it's timely. And it matters."