Contact General Manager Kelly Antal at 440-816-1457 or kantal@msn.com to preregister. 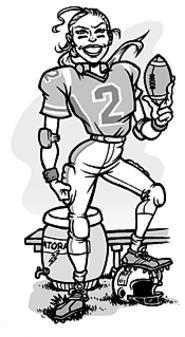 Want to play pro football? This could be your chance. Open tryouts are coming up this week for a local professional football expansion team. Think you've got the moves? Great. Got the size, the speed, the smarts to play at the pro level? Good. Think you've got the balls for it? That could be a problem. The National Women's Football League is holding open tryouts on Saturday, October 27, at 10 a.m. at the Estabrook Recreation Center near the Cleveland Metroparks Zoo.

"What, are you kidding me?" asks Michelle Scotch, an Akron teacher. "I'm in great shape, I'm competitive, and you get paid. Of course I'm trying out."

Scotch, 33, attended Miami University on a track scholarship, and she runs the 100 in 11.9. "This didn't used to be available to women. Things are changing. And in football, I'll probably be on a level playing field with everyone else, because the experience probably isn't as deep. I'm trying for cornerback or wide receiver.

"I'm not really that worried about getting hurt. My family is divided. The older ones, like my mom, can't believe I'm doing it. The younger ones, like my nieces, are more hip. They think it's cool. I told my mom if I got signed, I'd get my masters in a year, because I'd have some time off to work on it."

The league recently completed its first full, eight-game season, with 10 teams from around the country. At the championship game last summer in Philadelphia, the Liberty Belles creamed the Pensacola Power 40-7.

The league has 14 teams ready to go for the 2002 season, with the opener scheduled for April 20. Seasons run though June; playoffs are in July. Other teams, like the Cleveland Fusion, will be added to the schedule as they get up and running.

The league plays by regular NFL rules. The one exception is that a sideline completion requires only one foot in, as in college. Its a 100-yard field, with a slightly smaller ball. Last season, there were scores in the 50s, one in the 70s, and the Mass (Massachusetts) Mutiny ran up 90 points on the Baltimore Burn (good news for Clevelanders who still hold a grudge).

The Cleveland franchise is building from the ground up; in addition to players, its looking for coaches and -- naturally -- fans.

Plan to make it to the tryouts? Heres what youll need: Proof of age. Players must be at least 18 (the Pensacola team claims to have a player who is 56). You will also need health insurance and a $35 nonrefundable tryout fee. Outdoor cleats would also be good. So bring your game face, 110 percent effort, a big heart, and any other cliché you can pack into your gym bag.