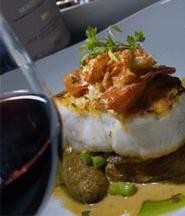 hen we spoke with East Side restaurateur Fabio Salerno over the summer about his plans for an Italian restaurant in Tremont, his vision seemed to tend toward casual comfort, with a moderately priced menu of pizza and pasta that would stand in contrast to the area's trendier boîtes.

But by the time Salerno actually opened Lago in September, it seemed plans had grown more grand: Not only does the new restaurant feature a fine-dining vibe, but the menu fairly bristles with luxurious indulgences -- lobster, veal, Chilean sea bass, and the like -- making this dining room as ambitious, and pricey, as any on the street.

Not that we're complaining. While two recent visits led us across a few rough patches, executive chef and restaurant partner Jeff Fisher (a veteran of Johnny's, the Metropolitan, Sushi Rock, and Salerno's other restaurant, Gusto!) clearly knows his stuff, and he typically turns out smart, unified dishes of towering flavor that had us cooing like grannies at a Christmas pageant.

Think succulent medallions of pancetta-wrapped veal, kissed with an earthy wine reduction and settled on a bed of spinach and roasted fingerling potatoes. Or consider the cloud-like housemade gnocchi, tossed with nuggets of rich lobster meat, in a satiny slather of sweet corn, cream, and truffle oil.

And that's barely scratching the surface of Lago's tasty repertoire. Including the carpaccio, the calamari, and the perfectly prepared sweetbreads, starters number nine. Add to that four salads (including an artfully presented Caesar, its crisp romaine leaves bound together in a broad parmesan tulle "ribbon"); two soups; a quartet of light-textured flatbread pizzas; seven additional pastas; eight additional entrées; and a half-dozen homemade desserts, and who knows what new favorites you're apt to discover.

It could be a starter, like the fragrant artichoke-and-goat-cheese tart, with its buttery crust and custard-like filling. Or it might be an entrée, like the unbearably light filet of sea bass -- so evaporative, it threatened to disappear like the foam on the crest of a wave -- topped with a tangle of frizzled onions and lobster meat, in a nuanced sauce of roasted red pepper, cognac, and cream. Or even a dessert, like the odd-sounding but delicious olive oil cake, all delicately crumbed, subtly sweetened, and layered with jam and mascarpone.

For our part, we went gaga over one night's salami platter, a rustic first-course assemblage of sheer-sliced, sweet and spicy salamis and capicollas, along with a fennel-infused length of sizzling duck sausage, ivory wedges of nutty piave vecchio (similar to a young parmigiano-reggiano), crisp crostini, and herbed mustard, for dipping. In fact, we purred over the piquant offerings so shamelessly that our neighbor decided to order one too.

The fact that he could hear our appreciative murmurs points up one of the problems we encountered: overcrowding. The two-tops are minuscule and should be avoided at all costs, but even the four-tops are tightly packed together, to the point that intimate conversations are unfeasible; finding a path to the restrooms seems improbable; and dodging staffers' buttocks, as they hover over the tabletops, becomes a freaky sort of parlor game.

Still, the neighbor's salami platter had barely arrived before my companion started kicking me beneath the table. "His is better than ours!" he mouthed frantically. And sure enough, it was, with such an abundance of sliced meats as to make our spare assortment look like leftovers.

Which may point toward another possible problem: inconsistency in the kitchen. Supporting evidence surfaced soon after, in the form of the neighbors' gnocchi. Ours had been rife with hunks of lobster meat. Theirs? Not a single shred in sight. (No pushovers, they quickly complained about this to the waitress, who saw to it that the kitchen put things right.)

Luckily, all such tabletop dramas take place against the backdrop of Lago's soothing, well-appointed interior, with its white linens, candlelight, and Mission-style woodwork remaining from when Theory occupied the space. Newly added murals and trompe l'oeil touches seem meant to suggest that diners are settled in a shoreside villa ("lago," after all, means lake), although such trickery seems unnecessary in this already atmospheric space. But the same could be said for Thursday night's musical entertainment. While talented enough, the duo's pop-rock repertoire seemed more suited to a hotel lounge than an upscale Italian spot.

In fact, all that keyboard banging made my sidekick a trifle grumpy. "What exactly is this supposed to add to my dining pleasure?" she groused, as the duo steamrolled through a version of "Viva Las Vegas." Her glibness just may have been the wine talking -- an excellent 2003 Dei Vino Nobile di Montepulciano ($40), incidentally, from Tuscany, recommended by our knowledgeable waiter from the all-Italian wine list.

After all, a few moments later it was all I could do to get her to look up from her veal medallions long enough to offer a taste. Plump, velvety, and almost dizzying in their richness, they were like heavenly little pillows on a plate. And if either of us had any beefs about our "dining pleasure" at that point, we were too busy cooing to say.