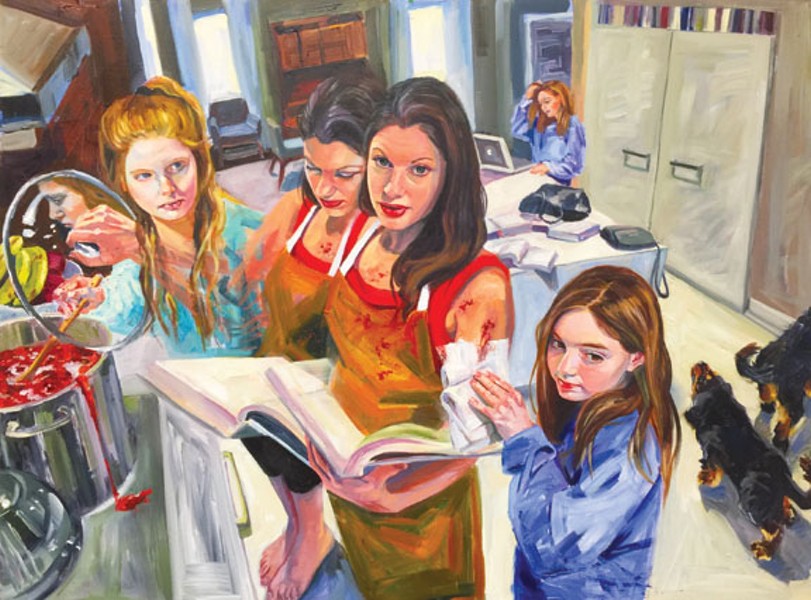 “Shielding Her Subject” by Sarah Curry

Every year for the past 10 years, in honor of Women's History Month, the Gallery at Lakeland Community College has presented an exhibition featuring only female artists. Given the current political climate surrounding women's rights, education, and funding for the arts, there might not be a more appropriate time for the arrival of From Woman X. The historic struggles of women artists are well documented. But as evidenced by the exhibition, our region is outpacing much of the country: Many if not most of the arts organizations in Cleveland are led by women, including Artists Archives of the Western Reserve, Heights Arts, MOCA Cleveland, Spaces, the Transformer Station and more. That doesn't mean we're where we need to be, but it's encouraging.

Lakeland's exhibition was originally inspired by the Guerrilla Girls and their sarcastic "Advantages of Being a Woman Artist" advertisement. Formed in 1985, the Guerrilla Girls are a group of anonymous, masked female artists and art professionals whose collective work is aimed at raising awareness of women artists and their disadvantages throughout history in comparison to their mostly white, mostly male counterparts. A copy of the Guerrilla Girls' poster still hangs in Lakeland gallery director Mary Urbas' office. Urbas is the powerhouse behind the annual women-centric exhibitions, having created the event and worked tirelessly year-round to expand the exhibition at Lakeland and throughout the region.

This year's exhibition includes work from more than 40 artists from northeast and central Ohio, as well as Arizona and Indiana, in a diverse variety of media. This year's show includes oil, acrylic, watercolor and encaustic painting, as well as drawing, collage, glass, ceramic, sculpture, mixed media and more.

The exhibition is divided into three sections by the building's architecture. Instead of separating the works by media or subject matter, Urbas has arranged the artwork in a way that may seem somewhat random at first, but ultimately creates a dialogue between the artists and their work. While several common themes become apparent, the diversity of styles, techniques and subject matter is predominant.

From Woman X features some of the region's most accomplished artists. Rather than asking the participants to create themed works, Urbas invited the artists to show their favorite new work. Thus, the exhibition offers an accurate representation of current local and regional contemporary art. Rather than pigeonholing these artists as "women artists making women art," it instead celebrates humanity's unique creative spirit. Despite the exhibition's unifying feminist theme, these artists deftly portray their subjects and concepts with the use of vastly different media and techniques.

The common themes that do emerge — portraiture (especially female subjects), animals, hands, geometric abstraction — help create a sense of unity in a very wide-ranging exhibition. Due to the layout of the gallery and Urbas' thoughtful curating, visitors travel a full loop through the space, twisting and turning, but ultimately arriving back at the point where they started: in the same place, but hopefully feeling a little better about the state of the world, or at least our little corner of it.

The Gallery at Lakeland Community College hosts a free, public artist reception from 3:30 to 5 p.m. this Sunday, March 26. At 2 p.m. in the Performing Art Center, next to the gallery, Lakeland hosts the annual Women of Achievement awards ceremony. Woman X remains on view through the end of March.

Again, we might not be there yet, but thanks to Urbas, we're getting there.