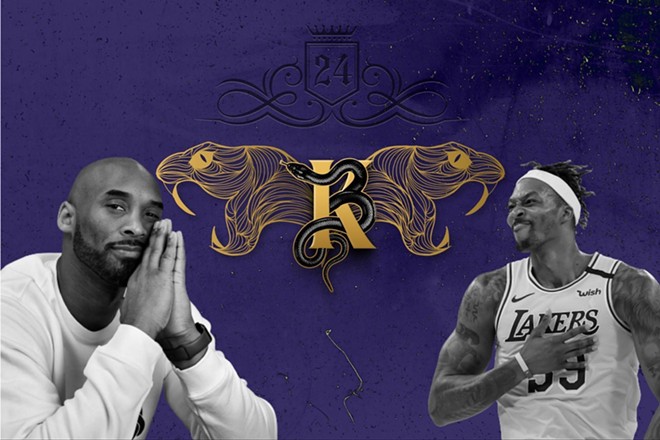 The October 8th launch of the KB24 NFT art collection is the talk of the town, and even NBA players like Dwight Howard can’t help but get excited. In his first tweet in five months, Howard said to his 6.3 million followers that he’s joining the KB24 Discord soon. And, soon is said to be this Friday.

Dwight and Kobe were once teammates, playing on the Lakers together from 2012 to 2013. Though the pair had a complicated relationship, Dwight has said that he’s had time to reflect and has let go of the past. “There were times where we just didn’t understand each other and I didn’t get a chance to tell him how appreciative I was for our time together and how thankful I was to be back here in L.A.,” said Dwight just after Kobe’s untimely death.

The unique NFTs will be dropped on KB24.com, which was once Kobe Bryant’s official website that fans went to for updates from the Lakers legend. All proceeds from the initial mint will be donated to the Mamba & Mambacita Sports Foundation, which was created by the Bryant family to honor Kobe and his daughter Gianna following their untimely death.

The founders of KB24, Los Angeles-based entrepreneurs Andy Treys and Sako Waves, announced their Oct. 8 launch date in an interview with Ballers Blockchain and shared their vision for the site and the NFT. “The team has been working around the clock to make sure everything goes perfectly, and that we do it right, while honoring Kobe’s legacy, his family and fans,” Andy said. “We have multiple teams reviewing the code before anything is published.”

The KB24 NFT is expected to sell out immediately upon release, and the team behind the project expects to raise nearly $3 million for the Mamba & Mambacita Foundation. The team also expects that secondary market sales will reach record-breaking levels.

With only 10,000 KB24 NFTs being minted, the digital assets will be unique and rare, with each one including a combination of different stats that represent the Black Mamba’s personality, achievements and notable moments in his career, the team said.

A non-fungible token (NFT) is a digital asset that represents something unique (non-fungible), and they are ideal for one-of-a-kind digital items. While cryptocurrencies are based on a blockchain network, the distinction is that one token cannot be exchanged for another.

Although the crypto business has been operating for over a decade, NFTs did not get much traction until the CrytpoKitties project gained popularity in 2017. CryptoKitties is an Ethereum-based game where participants purchase, trade, and breed cats represented by one-of-a-kind tokens generated via a smart contract.

The game raised awareness of NFT and introduced many to its possibilities, but the hype did not last long. However, towards the end of 2020, the crypto sub-sector started to resurface, and news of multimillion-dollar purchases dominated the headlines. Thus, NFTs created a new business model for the world of digital art.

How Are NFTs Different from the Traditional Art World?

The art industry is one area that has benefited the most from NFTs. For years, digital artists have battled with copyright protection and online monetization, but this has changed with the advent of NFTs. Now, digital artists can use these tokens to produce and sell their creations online. In addition, the buyer receives a unique token certifying authenticity.

NFTs and their smart contracts include unique characteristics, such as the owner's name, the artwork's precise location, and online connections, which may be incorporated in the piece of art. Additionally, DeFi platforms and applications have been developed, including Raribles, Zora, Nifty Getaway, Foundation, and Super Rare. These platforms make it possible for creators of all types, including digital artists, to monetize their work.

The desire to acquire collectibles has fueled the development of this space. For years, individuals have spent exorbitant sums of money to acquire tangible artifacts, such as baseball cards, Pokémon Go cards, and so on. This craze has now shown itself in the digital realm as well. For example, Dapper Labs developed NBA Top Shots, the company that produced CryptoKitties.

Due to non-fungible tokens, the digital art field has grown to unprecedented proportions. According to some experts, it evokes the Renaissance era in art. For example, Ben Gentili, a digital artist whose piece, Block 21, sold for more than $130,000 in 2020, says, "non-fungible tokens have ushered in a paradigm change in the art industry, reclaiming authority for the artist." He alluded to a similar situation that occurred during the Renaissance.

According to art historian Alexander Nagel, notions such as authenticity and fraud had no meaning in art before the Renaissance era. Today, NFT is reintroducing the idea of authenticity to art. This is how Chris Torres was able to sell his Nyan cat meme for $590,000, as he added an NFT that differentiated it from the millions of others on the internet.

Traditional art auctioneers are also participating in the activity. For example, Christie's auctioned Ben Gentili's digital artwork, Block 21, in October 2020, with 18 bids and a sale price of more than $130,000. In the company's first entirely digital art auction, a collection of Beeple artworks garnered over $1 million in bids within ten minutes of going live. These examples demonstrate how in-demand NFT artworks are at the moment.

The Benefits of Investing in NFTs

Non-fungible tokens are the blockchain industry's newest term. However, given their popularity, you may understandably question how helpful they are. So, here is how NFTs will benefit you.

NFTs enable artists to monetize their work directly. A fantastic example is a piece of art, which requires an agent to sell and promote the artist's work. NFTs prevent the need for these intermediaries, allowing artists or original producers to communicate and trade directly with their consumers. Additionally, this approach helps inventors by enabling them to receive a fee whenever they sell NFTs.

Investing in NFTs for their resale value has the potential to generate enormous returns. For example, buyers have sold some of these antiques for more than $20,000 USD after spending only a few thousand dollars. As a result, they earned almost $15,000 USD in only one transaction by reselling.

Without question, NFTs have altered the art world's paradigm by giving digital artists authority over their creations. While many critics have questioned the simplicity of the artworks that command such high prices, it is difficult to ignore the industry's overall benefits.

What matters most to founders Andy and Sako is honoring the legend and inspiration that Kobe was, and bringing fans together through collectible digital assets they can cherish forever. “The main purpose is to honor Kobe, while also raising funds for the Mamba & Mambacita Foundation,” Andy, who considers the Lakers legend to be his childhood icon, says.

To add to the Dwight Howard hype for Lakers fans, the KB24 team announced that a random KB24 NFT holder will win courtside tickets to a Lakers game of their choice — in any city. Those interested in the new NFT art collection can participate in presale contests announced every day on KB24’s Discord server. The team also shares updates regularly on Twitter.