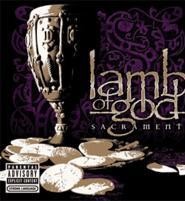 Two albums ago, Lamb of God was great. Now it's merely very, very good. Sacrament is both a holding pattern and a retreat: The riffs on this disc could have come straight off 2004's Ashes of the Wake.

That's not exactly a bad thing, of course. Mark Morton and Will Adler have composed some of the most exciting riffs of the new century, combining the hammering repetition and squealing lead runs of death metal with the muscularity and stripped-to-the-bone toughness of hardcore. And they're still backed by Chris Adler's astonishing drum skills and fronted by Randy Blythe's guttural redneck snarls.

There are a few surprises here -- some positive (the almost Ministry-like closing track, "Beating on Death's Door") and some not (the overly melodic "Again We Rise"). So if the bandmates haven't lost any ground, they haven't gained any either. Lyrically, though, there's been a retreat. Lamb of God has been one of metal's loudest, most powerful anti-Bush voices. This time out, politics are absent, replaced with morose, Henry Rollins-style introspection. While it's understandable that Blythe and company wouldn't want to be pigeonholed -- or wind up naked on the cover of Entertainment Weekly -- it's a little disappointing.