The testosterone club at Last Call Cleveland fires off another round. 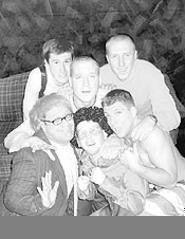 It's a classic scene from '90s American cinema: Alec Baldwin, a feisty, foul-mouthed realtor in Glengarry Glen Ross, tries to fire up his downtrodden, unproductive agents after a summer of slumping home sales.

Take that same scene, replace Baldwin with Ronald McDonald, and recast the agents as a breakroom of lethargic, unmotivated burger flippers from Mickey D's. It's one of 12 new made-to-order skits from Last Call Cleveland, a four-year-old comedy troupe scheduled to perform its newest show, Last Call Cleveland Takes Manhattan, at Second City Cleveland on January 27.

When the seven-man cast debuted its first stage show at Second City in September, the hit of the production was a Don Ricklesish roast of Superman. The skit's popularity led Polk to a retooled version, with Wonder Woman as the recipient of the 36th annual Hall of Justice Superhero Award. He-Man, the Karate Kid, Batman, and, for the hell of it, Dom DeLuise are among the heroes slinging insults at the comic book heroine.

The misogyny doesn't stop there. Polk says women don't share the stage with Last Call because the fairer sex simply doesn't know how to crack a joke. "There are only about six funny women in the world who are allowed to perform with us," he says.

Sexism in tow, Last Call Cleveland has achieved a cult following of sorts since forming at Kent State in 1998. Until recently, the group aired a popular hourlong show every Monday and Tuesday on Cleveland-Akron Television (CAT). With a mission to shop the show to more widely viewed stations, the cast pulled the plug on the CAT broadcasts, freeing up time for rehearsals three days a week, in addition to live performances and several public-access TV tapings.

Last Call's sketches are performed in a scripted, talk-show format. "We're very anti-improv," Polk explains. "It's so annoying. Improvisers are usually too theatery. If their skits are that good, why don't they just write it out?"

The troupe has spent the past two months scripting its latest offering, which includes a jab at the group itself. "It's a parody on the cheesy guys you meet on West Sixth Street," says Polk. "All they talk about is their sexual prowess. This skit is about [using] our lack of sex to coax women into going to bed with us."