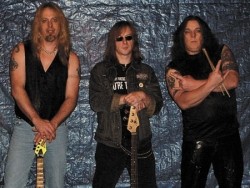 Last Stone Cast has signed a one-record deal with A & S Record Private Label. The Texas indie label heard good things about the Akron rock band, checked out its MySpace page and decided the group's retro pure-rock sound is in step with the times.

"I feel Last Stone Cast has what it takes to make it," says CEO Harvey Barr, who will master the disc. "The year 2009 is shaping up to be a wonderful time for new music. With all of the major rock artists of the '80s and '90s coming back and selling out, Last Stone Cast is another artist with a strong album that is packed with some powerful lyrics."

The powerful lyrics come from former Fast Chester bassist Jon Epstein, who's academically certified to write deep stuff. Epstein has a sociology doctorate from Kent State and recently landed a gig teaching at the University of North Carolina at Greensboro. He still shuttles back and forth between Carolina and his home in Akron. Singer-guitarist Scott McConnell and drummer Bill Morrison also play in Akron's Ripcored. With Epstein producing, the band recorded basic tracks at Cleveland's Lava Room. The group will mix the album in North Carolina.

"We're really happy with what we've recorded," says Epstein. "Scott's vocals are just stellar, and we got some ridiculously cool guitar stuff. I think our fans will like it a lot. In most ways it is a logical follow-up to [previous EP] Last Stone Cast. No cowbell this time, though."

The record, tentatively titled Life Construed, is due in early 2009. The label will distribute physical copies via CD Baby and make it available at all major digital distributors.

Epstein likes the deal because of the label's "enthusiasm and commitment to our project." "We speak the same language and understand the nature of marketing a band like LSC," he says.

¥ Pretenders chief Chrissie Hynde is making good on the back-to-nature theme of Break Up the Concrete, the band's ninth studio album and its first in six years. The disc will have a limited run of ecologically friendly packaging made of handmade seed paper that, when planted, will sprout. The disc arrives Tuesday, October 6.

The Pretenders - Hynde, guitarist James Walbourne, bassist Nick Wilkinson and drummer Martin Chambers - will appear on the Late Show with David Letterman on October 6 and The Today Show the next day.

¥ Akron's Againsters (formerly the Professional Againsters) will play their first Cleveland show of the year Friday, October 3, at Now That's Class (11213 Detroit Ave.). The old-school punk-rock band will debut a new song called "Mess of Me." Singer-guitarist Dan Halen will just sing, since he just broke his hand not too long ago.

¥ Lionsgate and Clear Channel are hosting a contest for unsigned bands to land a song in the upcoming movie Punisher: War Zone. One grand-prize winner's song will appear in the movie and on its soundtrack. Visit iheartmusic.com/Punisher for more details. If previous films about B-list Marvel heroes indicate what they're looking for, the winning band will play shitty modern rock.