The romance in Innocence is done in not by age, but by platitudes. 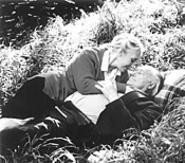 Filmmakers don't get any more sensitive than Paul Cox. When it comes to jerking a tear or tugging a heartstring, this Dutch-born, Australian-raised veteran is a master. Just ask anyone who saw My First Wife (1984), in which a workaholic disc jockey falls to pieces when his neglected wife has an affair, or Cactus (1986), in which a young woman who is going blind falls in love with a cactus farmer who's already blind. Forget popcorn sales. When a Paul Cox movie is playing the multiplex, you want the hanky concession.

The latest offering from this expert manipulator of emotions is a septuagenarian love story called Innocence, and though it doesn't measure up to Cox's best work, it will likely please his loyalists, who are numerous enough that New York's Lincoln Center staged a retrospective of his films in 1992. All the Coxian trademarks are on display here -- careful observation of human relationships, stately acting, decorum. He is a resolutely old-fashioned storyteller -- stodgy, some would say -- and this romantic drama about Andreas, an aging widower-musician, and Claire, a long-suffering housewife in Adelaide, who rekindle a love affair that was interrupted a half-century earlier, meanders along like an afternoon tea at the club.

The film's innovation is its supposed depiction of late-in-life lust -- complete with a couple of demure makeout scenes featuring people who've eschewed the Grecian Formula but apparently not the Viagra. Now, any antidote is welcome to the relentless adolescent writhing and Cro-Magnon dialogue Hollywood spoons out all summer to the hormonally active and fiscally crucial 18-to-35 demographic, and Cox is to be admired for his belief that people 60 and up are still willing to go to the movies. But the assumption, everywhere evident here, that Innocence is breaking some sort of movie taboo about geriatric sex is patently false. Cox fans may rejoice when his attractively "mature" Aussie actors, Julia Blake and Charles Tingwell, jump into the sack together, but he is being anything but daring. There is no taboo. And for all the actual desire Cox reveals here, good old Claire and Andreas may as well be playing whist.

Furthermore, the writer-director doesn't quite trust his audience to follow along. Lest we misunderstand, he inserts a dozen misty, silent flashbacks showing us Claire and Andreas as randy teenagers (Kristien Van Pellicom and Kenny Aernouts), staring into each other's eyes, groping each other amid the splendor of first love, as if to justify how they feel now. Not only that, Cox once more indulges his unfortunate penchant for explaining the meaning of life. Moviegoers who spend eight bucks to watch the grown-ups of Innocence probably already know a thing or two. Surely these enlightened souls needn't endure the film's endless bombardment of platitudes. "Too much love is as bad as no love at all," Claire tells us. "Love becomes more real the closer it comes to death," Andreas counters. "To love is to be aware of eternity," Claire tells us. "Goodness never dies, and love -- real love -- never dies," Andreas assures us. Wow! Is there no mystery the man cannot fathom?

Compared with the philosopher king and queen of suburban Adelaide, Claire's son David (Robert Menzies) is a rank amateur. The most profound observation he can come up with regarding Love, Death, Beauty, or God is this: "You have to live for someone or something -- otherwise, life doesn't matter." We'd best get that one down in our notebooks. It'll be on the midterm, sure as hell.

Meanwhile, we are left to contemplate the damage Claire and Andreas do to others with their senior version of adultery. Like the wife in Cox's earlier My First Wife, Claire has long been taken for granted by her complacent bore of a husband (Terry Norris, who is actress Blake's real, offscreen husband). Like the eightysomething heroine of Cox's best film, A Woman's Tale (1991), she doesn't care about social conventions. So, by her lights, "the only way to be happy is to love -- to love everybody, to love the world." To that end, she recites French poetry to Andreas on the bank of a babbling brook, listens enraptured as he plays the pipe organ and tells the benighted cuckold, in no uncertain terms, that he's made a botch of things and she may be going onward. Of course, no story about love in the autumn of life would be complete without the grim reaper looking in. Inevitably, both Andreas and Claire are afflicted with serious diseases, we come to learn. The only question is which one of them will get to the barn first.

Paul Cox's admirers are sure to embrace this latest eruption of sincerity and sensitivity. In the movies' ongoing love-gives-life-meaning sweepstakes, there is no stronger contender this year than Innocence, and in the good-taste-can-overcome-vulgarity contest, it is a sure winner. Fine. But the rest of us suddenly find ourselves retiring to the lavatory to wash away the post-Coxian emotional goop.