Laugh Through the Pain

Tears and chuckles flow together in the Play House's Rabbit Hole. 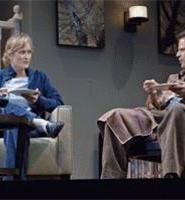 Perhaps there is no more agonizing event than the death of a small child. There is no metaphor, no simile, no turn of phrase that can come close to expressing what a parent feels in such a tragic situation.

Yet that is the assignment playwright David Lindsay-Abaire sets for himself in Rabbit Hole, now at the Cleveland Play House. His courage is to be applauded, since he has to avoid Lifetime Channel mawkishness while conveying how a young life snuffed out would affect an otherwise normal family. Although the script is less than ideal in some respects, the Play House company delivers a nuanced, understated performance that is as affecting and funny -- yes, funny -- as it is believable.

Becca and Howie Corbett are husband and wife, but no longer mother and father of four-year-old Danny, who was killed accidentally by a passing car when he ran out into the street after his dog. Wisely, the playwright doles out this information across the two acts, sometimes through off-hand comments, so there is never the sense of artificial exposition.

It is now eight months later, and we find Becca folding Danny's clothes, preparing to donate them to Goodwill, as Izzy, her younger sister, relates a story of how she recently decked a woman in a one-punch bar fight. It's clear from Becca's spotless home and her shocked reaction to her quirky sister's behavior that she's a very organized and controlled person. That sets up one of the fascinating threads of this play, as Becca tries to maintain equilibrium in a life that has shockingly lost its center of gravity.

There are many points of tension between Howie and Becca, since he wants to keep reminders of Danny around the house (he plays a videotape of himself playing with his son and their dog), while Becca wants them gone. She even plans to sell the house, because, as she explains, "He's everywhere."

The family dynamics are complicated to some degree by Nat, the women's mother, whose loopy observations and honest wit make her a closer DNA match to Izzy than Becca. Also showing up is Jason, the high school senior who was driving the car that killed Danny. He has a desire to speak with the Corbetts, to work out the guilt he feels, even though he knows he was blameless in the child's death.

In one of his best directorial efforts since taking the reins at the Play House, Michael Bloom orchestrates a symphony of quiet, lingering hurt that never becomes tiresome. He is helped immensely by Lindsay-Abaire's ability to fashion many comical yet meaningful moments out of this depressing scenario. For example, Becca gives Izzy her birthday gift -- a "bathroom set," complete with color-coordinated shower curtain and bath mat -- and the playwright manages to use this odd present as both a platform for laughs and a way to show how difficult it is for the sisters to relate to each other.

In the central role of Becca, Angela Reed offers a well-modulated performance, allowing us to feel her bottomless grief without ever broadcasting her emotions. Reed's scenes with Howie (a lumpily credible Danton Stone) and Jason (played with earnest nerdiness by Troy Deutsch) are particularly effective. When Becca finally sits down with Jason, he loosens up and relates a cute Senior Prom experience, and she slowly collapses in tears -- the only ones she sheds -- as she realizes she will never hear similar stories from Danny.

Genevieve Elam gets off to a ragged start as Izzy -- her bar-fight story feels a bit forced -- but she settles in quickly and registers all the awkwardness her character would feel in the house of her very dissimilar sister. And when Izzy reveals her pregnancy to Becca, the tension between the mother-to-be and the mother-no-more is palpable. In the role of Nat, Kate Skinner gets many of the best laugh lines, and she does a fine job of tracing the star-crossed fate of the Kennedy clan, pointing out how stupid it is to play football on skis (how Michael Kennedy met his demise). Unfortunately, much of her delivery follows a sitcom pattern and rhythm.

As powerful as the central concept of Rabbit Hole is, it allows very little room for character development or dramatic progression -- two hallmarks of any competent script. The mood goes from sad to angry and back to sad, but never is able to break through the cocoon of circular pain. And the ending feels far too pat, in light of the emotions such an event would set in motion.

Even so, this is a reasonably diverting evening of theater, and it's gratifying to see the Play House handle such demanding (and flawed) material with smooth professionalism.