There are no stooges on this stage -- Porthouse's Oklahoma! entrances. 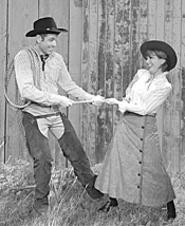 At 7:59 last Saturday evening, there were myriad reasons for not wanting to witness yet another hootenanny staging of Oklahoma! We've all seen it, haven't we? Our high school put it on, didn't it? Sure, remember? The quarterback and head cheerleader starred as the lovers Curly and Laurey. Hell, who needs another load of that tripe! The story's lame, and the songs are creaking with age -- and sappy, to boot. I mean, "The Surrey With the Fringe on Top"? C'mon, already. Maybe it's time to let Rodgers and Hammerstein's paean to a simpler America slide into the musical old-age home, where it can drool on its chest, along with the other antiquated relics of Broadway's past.

Those were the thoughts at 7:59. Then the music and lights came up on a Porthouse Theatre production of Oklahoma! that ranks as the freshest, most natural, and most surprising rendition of this classic in recent time. Under the wise guidance of director Terri Kent (who's also Porthouse Theatre's artistic director), this Oklahoma! earns its exclamation point by attacking each scene as if it had never been done before, refusing to rely on our shared memories of familiar melodies such as "People Will Say We're in Love" to cruise amiably through the numbers. Instead, each song is fully and sharply acted, as it was meant to be when this show was created -- the first instance where tunes in musicals weren't just pleasant interludes.

One of the greatest surprises is the casting of the two leads. The ingenue Laurey is usually played by a sweet, fluttery blonde with doll-like features and a lovely soprano singing voice. Well, striking Kayce L. Cummings has the pipes, but she also has dark brown hair, a spark in her eyes, and an edgy orneriness that makes you believe she could handle herself on a cattle ranch jes' fine. Even though Curly towers over her, she matches his physical size with an intensity that gives her teasing and flirting some bite. As for the Curly man, James Love deftly grafts the slack-jawed casualness of a young Jimmy Stewart onto the testosterone six-guns of a Russell Crowe. This cowpoke, who's so bowlegged that "he couldn't stop a pig in the road," never loses that stance -- or his Oklahoma drawl, while he modulates his opera-trained voice and actually sings like the wrangler he's supposed to be.

Of course, their path to happily-ever-after is blocked by Jud Fry, the ominous ranch foreman, who's played with genuine menace by stocky, glaring Michael Sherman. Jud's scary fixation on Laurey is a problem that Curly tries to solve by coaxing him into conveniently committing suicide in the amusing "Poor Jud Is Dead." But Jud ain't going nowhere until a lot more songs are sung. This threatening triangle is played out captivatingly in the Act One finale -- a dream ballet direct from Laurey's fevered sleep, featuring dancers dressed all in white and wearing impassive white masks. This kind of hyper-theatricalized scene could be an embarrassment if not handled perfectly, but choreographer John R. Crawford turns it into an evocative expression of Laurey's deepest hopes and fears.

Plenty of laughs are provided along the way by Ado Annie, the round-heeled gal pal of Laurey, who admits "I Cain't Say No!" to any man who spoons a little sweet talk her way. MaryAnn Black as Annie is almost terminally perky as she swoons for the peddler Ali Hakim (a charmingly mercantile Rosario Costanzo), then her longtime beau Will Parker (Eric van Baars, who has a face as wide open as an Oklahoma prairie), and back again. But once Will plants a couple of kisses that make Annie's feet do 360s (and once Ali is able to manipulate his escape), Annie decides to hook up with Will in the comical duet "All er Nothin'."

Director Kent keeps the crowd scenes crisp and focused, and she knows how to make the most of featured roles -- using the staccato Woody Woodpecker-on-crystal-meth laugh of goofy Gertie (Sarah Lyon) to irritating but amusing effect. The openwork farmhouse set design by Nolan O'Dell and the tight orchestral support under the baton of Melissa Fucci -- not to mention the strong ensemble singing and dancing -- contribute to the show's professional patina. There is one small quibble: a fight scene between Curly and Jud that is too brief and unconvincing to justify its outcome. But with that exception, this production is masterful at making this saccharine, artificial world feel amazingly genuine.

Perhaps the loveliest image of the evening is the first one, when Curly enters by clip-clopping around the upper perimeter of the Porthouse Theatre on a horse. As the light of the sun catches his hat and he croons, "Oh, What a Beautiful Mornin'," you definitely feel that you aren't in Ohio anymore.