As one of TV's best and best-loved series launches a new spin-off, its creator grapples with the aftershocks of terror. 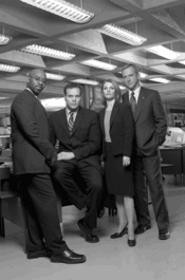 Rene Balcer, like you and everyone you know, can't stop talking about what we now refer to simply as The Attack. We may resume our lives, fall back into our routine until it again feels mundane and comforting, but sooner or later, The Attack becomes the only topic of conversation. As we count the missing and bury the dead, even from a distance, and piece together what little remains of our stock portfolios and send friends and family off to fight the unseen enemy, we wonder and fret: How will the carnage and chaos of September 11 change our lives? Or will it? After all, who has time to worry about toppled landmarks and forthcoming war when a new season of Friends is about to begin? Like the president says, it's time for America to get back to business: Just who is the father of Rachel's baby?

On September 10, maybe we cared a little too much about that question. On September 11 and in the days since, it was doubtful we cared at all about what we saw on TV, save for images of smoke and rubble and a president behind a lectern. Movies were held out of theaters. Networks postponed the beginning of the fall season. The Emmys were pushed back until October 7; now, there comes word that HBO, up for nearly 100 awards, isn't even sending representatives to the awards show, and others may follow. The entertainment industry hides its collective head in shame. We're so pointless, mutter studio executives and record-label bosses, so inane.

And this, at last, is where Rene Balcer comes in. For 11 years, he has been a writer and executive producer on Law & Order, among the most successful and adored series in the history of the medium. On September 30, Balcer's name will be attached to the third installment in what has become a brand name: Law & Order: Criminal Intent, which differs from its predecessors, including Law & Order: Special Victims Unit, in that each episode begins with a crime being committed. We see bad men and women doing bad things: stealing diamonds, for starters, or murdering the innocent with broken bottles. And then we see good men and women, including Men in Black's Vincent D'Onofrio and Oz's Kathryn Erbe, solving the crime. As always, there is the patented Law & Order twist. We cannot always trust what we see or what we think we know.

Balcer is credited as the show's co-creator, with Dick Wolf, and developer. It was his idea, more or less--his characters, his setting, his stories. It was born out of the ashes of one of Wolf's failed shows, Crime & Punishment, which aired briefly in 1993 and told essentially the same kind of tale: Criminals spilled their guts to the unseen Interrogator. At this moment, Balcer would no doubt prefer to talk about his new television show. There is no one better suited to promote Criminal Intent, one of the few new shows of the fall worthy of your attention.

But the conversation, of course, keeps coming back to The Attack. And with great reason--a few, actually. First of all, the three Law & Order series were to be part of a five-hour mini-series dealing with bioterrorism in New York City. Those five hours of television no longer exist: NBC, Studios USA (which makes Law & Order) and others involved with the show axed the mini-series. Most likely, it will never see the light of day--a decision, Balcer says, that was a no-brainer, as far as he was concerned, though there were some among the staff who believed it could be merely pushed back.

"Some of the people who had worked and invested a lot of time and effort into the mini-series may have entertained thoughts of finding a way of still doing it," says Balcer, who, the day before this interview (September 20), returned to Los Angeles after spending a few days in New York City with his wife, who lives in Manhattan. "But I think cooler heads prevailed. In the aftermath of such a big shock, everybody reacts differently, and it's hard to hold people accountable for what they do in a crisis and in the immediate aftermath."

Discussions have been taking place all over New York and Los Angeles, as studios started yanking movies that had anything to do with terrorism, mayhem, and mass murder and networks started rethinking shows that depicted exploding airplanes (Fox's 24) and mentioned Osama bin Laden (CBS's The Agency). A few days after the World Trade Center collapsed to the ground like a child's toy model, Balcer even received a phone call from a writer-producer on another show--he won't say which, only that it's been on the air "for a couple of years"--seeking his advice. The call came out of the blue: Balcer (pronounced bal-SAY) had never even met the woman on the other end of the line.

"She told me people at her show were sitting around wondering how do we write for a universe that no longer exists," says Balcer, once a journalist for a now-defunct Canadian newspaper. "She seemed pretty distraught. She was referring to the idea that as of now, everything changes. That's an amorphous catchphrase. We don't really know what that means. My thought was, 'Well, if aliens landed, that would change the universe. That would change everything. That would change our views about ourselves, our view of God, of evolution, etc., etc.' I don't know if this is an event that changes everything. I think it will change some perceptions about our own safety, our role in the world, so forth.

"I'm not going to go through a list of platitudes, but, yes, it's going to have an impact. I just don't think it's a world-shattering event, as awful as it is. It's not something that will change the course of history...On the other hand, I'm kind of a guy who believes the glass is half full. As awful as this is, there may be something good that comes from it. If nothing else, Arafat declares a cease-fire, and Ariel Sharon decides, OK, now we can talk with the PLO. If nothing else, there's one thing. Sometimes, it takes a very sobering, awful tragedy to wake people up."

But what happens now that we're awake...and unable to fall back asleep, lest we let down our guard and make ourselves easy prey? Law & Order has always been a television show very much grounded in the real world, the awful here and now. Its plots have long been ripped from today's headlines: mothers who kill their children, politicians caught in sex scandals, priests who molest parishioners, revelers who attack bystanders in Central Park, athletes who have their girlfriends offed. But the show must now grapple with the fact that the headlines, big and bold, scream only one thing: AMERICA UNDER ATTACK.

Balcer is no stranger to war. He began his career, by accident, as a cameraman covering the Yom Kippur War in October 1973. He had gone to Israel to visit a girlfriend and landed just as the Egyptian and Syrian armies were storming the country, on the holiest day of the Jewish calendar. He got his hands on a camera and went to work for Canadian television. But he must now contemplate how to let his televised fiction deal with horrific fact.

Balcer insists that Law & Order's reputation as a based-on-actual-events show is a bit misleading; he likes to say it doesn't simply offer "knee-jerk reactions to reality." Though the show's staff writers and freelancers, most of whom are based in Los Angeles, often construct their teleplays from newspaper stories, they're merely inspiration for plot lines--not the whole truth and nothing but. After all, this is fiction, entertainment, a diversion, not docudrama. While agents and authors hustle to publish books about the terrorist bombings of the World Trade Center and the Pentagon--two are due within days, and more are sure to follow--television, especially series TV, bides its time and searches for some kind of opening. There is no rush.

"And I think something like the events of [September 11] are so huge that we still can't get our heads around it, let along start being contemplative about them," Balcer says. "We don't know what else is going to happen as a result of this. I hate to go back to Pearl Harbor, because I don't think it's an accurate parallel, but it's like trying to do a story about Pearl Harbor in isolation, without going into what led up to it and what followed. And right now, we don't know what's going to follow, so that would be another reason not to go to it as a story. And also, I would be very skeptical about motivations for doing a story like this. It's too raw. Maybe two, three, four, five years from now, we can look back at it and hopefully mine it for more universal truths."

And it might all be a moot point: NBC has ordered only 13 episodes of Criminal Intent, which are all completed. The audience will decide whether there will be more: If the network is happy with the show's early ratings, Criminal Intent will shoot nine more episodes at the end of January. For now, Balcer has little to do other than finish some small post-production details, wait for the show to debut...and talk about The Attack. He insists he is no more worried about the show's fate now than he was on, say, September 10. He says he'd be far more concerned if he was running The West Wing, which risks being rendered irrelevant--indeed, a completely useless fantasy--if it doesn't address the terrorist attacks. (It will, in at least one special episode to air October 3.) His is just a cop show. They've been around since the inception of the medium, and they'll outlive us all, war or no.

"Last week, we were talking about the entertainment business and, God, how silly everything is and how silly we are and what we do is," he says. "I think, well, there is a value in this. In New York last weekend, a lot of people went to museums. A lot of people went out and bought music. A lot of people went to plays. You can only stare at graves for so long, and you need to turn away from it in order to think about other things--in order to process the horror. Staring at it and staring at it forever is unhealthy. I'm not saying what we do is art, but art or popular entertainment helps put things in context. And it keeps us in touch with values that are eternal, that were there before and will be there after."