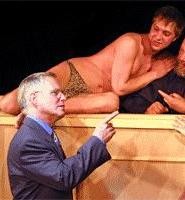 Anyone who's been in a real courtroom -- as opposed to the prettied-up ones on TV -- knows how intellectually squalid these supposedly hallowed venues are. While lawyers wrap slivers of truth around mounds of bullshit, the judge dutifully disallows relevant evidence for all manner of arcane reasons. And naturally, out of this chaos, justice is expected to totter like a bruised and battered survivor.

The process is ripe fodder for a play, and in a way it's surprising that playwright David Mamet doesn't make more of it in Romance, now being produced by the Bang and the Clatter Theatre Company in Akron. While much of the action is staged in a courtroom, Mamet is more interested in setting off farcical firecrackers than in developing a searing and coherent portrait of jurisprudence run amok. But so what? The laughs in this furiously fast-paced 90-minute show are so frequent that it's easy to forgive the absence of any larger purpose.

It begins midtrial in New York City, where the defendant is being grilled by the prosecuting attorney. The proceedings are continually interrupted by the judge, who is sneezing, popping allergy pills, and apologizing for being late -- "I ran into a parade on the way over. So many people. Still, I guess that's the nature of a parade." The parade is somehow connected to a peace conference between Arabs and Jews being held in the city, an event continually referred to by the participants.

Each of the attorneys also has a problem that is unconnected to the trial itself. The prosecutor has a live-in lover, a flaming young man named Bernard, or Bunny for short (interestingly, he's the only character with a name). Dressed in only a flimsy thong and a shell necklace, Bunny is in a righteous snit over the sad state of their relationship, lamenting that "my friends think I brought home a TV weatherman!" As they argue while setting the table for a dinner party, the roast in the kitchen burns and Bunny implodes.

On the other side, the defense attorney and his client are at each other's throats for religious reasons. The fundamentalist Christian lawyer is offended by the defendant's Jewish heritage ("You people can't order a cheese sandwich without bringing up the Holocaust"), and his chiropractor client jabs back with a vengeance, implying that the attorney's young son is probably getting porked by their priest. Amid shouted insults of "Sheenie" and "Kike," the defendant finally stops in his tracks and declares, "I know how to bring peace to the Middle East!"

If you're thinking a bold international stratagem is about to be revealed, think again -- this play is all about generating laughter out of its madcap premise. Indeed, with Romance, Mamet swims a few fast laps in a pool brimming with the stereotypes for which his critics have often derided him. Famous for being a writer who explores the inner workings of masculinity with frank and often vulgar language, he offers a show with a cast of seven men who attack each other with feral animosity. A few of Mamet's films have been on the subject of con men; here he seems to imply that the biggest con game may be the legal system itself.

The Bang and the Clatter cast does a rousing job with this material. As the judge, Ralph Cooley begins as a blustering dimwit and, thanks to a continual ingestion of medications, jumps the tracks later on, stripping down to his underwear and revealing personal secrets ("I had an affair with the only ugly girl in Iceland"). Tony Weaver and Scott Shriner ignite the verbal fisticuffs as the defense attorney and defendant, respectively. Less successful is Richard Worswick as the prosecutor; unsteadiness with his lines causes some soft readings and removes any contextual shape from a short monologue.

Perhaps the best performance is turned in by Ryan McMullen, who makes vulnerable and weepy Bunny at once thoroughly over the top and totally believable -- a neat trick indeed. When he reappears in the courtroom, a satchel of his belongings in one hand and the burnt roasting pan in the other, the hilarity hits its high point.

Director Sean Derry, who keeps the rapid dialogue firing like a machine gun, wisely executes this script without intermission, allowing the manic Mamet momentum to build to a strange and oddly satisfying conclusion.

Those who have not sampled the extraordinary skills of the Bang and the Clatter should consider that God made cars for a reason. And one of them is to get the hell down to Akron and see one of the most exciting theatrical companies in the area.