Blackalicious takes its sweet time moving up from the underground. 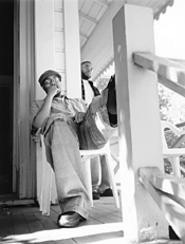 Blackalicious sits on plush couches in an office at its new home, MCA, where platinum plaques line the walls. The trappings of a mega-label are fairly new to Gift of Gab and Chief Xcel, who have spent the last 10 years distributing their music by hand. Today, with their latest disc, Blazing Arrow, backed by the might of the world's largest music distributor (Universal), they're still modest. X wears a T-shirt and ball cap; Gab's in a short-sleeved button-down, wire-rimmed glasses, and his trademark newsboy cap -- worn the traditional way, not backward or tipped cockily to the side. Both sport goatees and baggy pants, their necks and wrists free of "bling," their attitudes free of pretense.

They almost seem . . . shy. With his head sunk into his large frame, Gab looks like a tortoise retreating into his shell, craning up only to speak.

"[Being at a label like this] is all a blessing. It's humbling," he says, surveying his posh surroundings. "At the same time, it's something we've been working at for years." His head sinks back into his shoulders. Between the posture and the specs, it's hard to imagine a relentless stream of unlikely metaphors gushing out of his mouth like ink from an exploding fountain pen. Anyone who's heard Gab's gift live or on record knows that the man shreds microphones the way Arthur Andersen shreds documents.

But today it's X who does most of the talking. He grins as he recounts the long, patient journey that brought them to this point: "Almost 10 years ago to this month, we'd be all piled into our van, going record store to record store, asking people to take our records on consignment. And our careers have just built from there, stepping-stone after stepping-stone."

The first stones were laid in high school. Gab (Tim Parker) met Xcel (Xavier Mosley) in Sacramento in their 10th-grade home economics class. The two bonded over their mutual appreciation for Audio 2's "Top Billin'," which, with its raw, basement style, "just blew my wig back," says X. They began collaborating, X fiddling with borrowed drum machines, keyboards, and a four-track, and Gab honing his skills by battling MCs at all the local high schools.

After high school, X enrolled at Cal-Davis, and Gab moved to L.A and worked at Kentucky Fried Chicken. The two continued to exchange tracks and rhymes over the phone. Realizing that running the deep fryer wasn't where his passion lay, Gab moved to Davis to work "hard-core" on music with X. There, they began releasing vinyl 12-inches, including Blackalicious's 1994 underground anthem "Swan Lake."

Once the records were pressed, the guys serviced them to college radio jocks across the nation and peddled them to retailers out of their car trunks. Between its lyrics about patience and peace of mind, and its unconventional rhyme schemes, "Swan Lake" set the tenor for Blackalicious and branded the group as NoCal's answer to L.A.'s Freestyle Fellowship.

After X and crew graduated from Davis, they moved to the Bay Area, opened an office in Berkeley, and put out a host of 12-inches. Somewhere along the way, the artist-run collective changed its name to Quannum Projects and nabbed solid national distribution through Caroline and tRC. With a stable of songs already in the can, Blackalicious was poised to drop its debut LP on hungry hip-hop heads nationwide.

But three years later, heads were still waiting. The full-length's delay was the result of what Blackalicious's official label bio describes as Gab's period of "personal turmoil," what Gab himself calls "growing pains." He avoids discussion of his bout with alcoholism, saying only this: "The biggest struggles give birth to the greatest creativity."

In 2000, six years after "Swan Lake," Blackalicious finally released Nia, meaning "purpose" in Swahili. Specifically, it seemed, the duo's purpose was, as Gab stated in rhyme, to "clean out the digestive tract of hip-hop like cranberries." Socially conscious, but free of fierce sociopolitical rants, Nia challenged gangsta rap not so much with contempt or bravado as with wistfulness and resolution. The disc also included plenty of tracks whose aim was simply to showcase Gab's gift: an uncanny, often Seuss-like verbal dexterity, served up in a range of rap styles, from gruff dance-hall cadence to precise rat-a-tat-tat. Nia sold 100,000 copies, and critics heralded it as an indie hip-hop classic; ears at the major labels perked up, and offers were made.

"In the end, it came down to, creatively, which situation is going to allow us to be us and not interfere with our process," says X.

They chose MCA, home to several hip-hop acts falling within Blackalicious's left-of-center milieu, including DJ Shadow, the Roots, and Common. A listen to Blazing Arrow suggests that the guys made the right choice.

Other than the disc's array of cameos, it makes no commercial concessions. Once again, Gab is "prone to leave your dome blown with the poem, homes" on sweaty verbal workouts such as "Chemical Calisthenics" and "Paragraph President." His lyrics are free of the "thugged-out/pimpin'/ flossin' my ice/ packing a gat" mentality that litters the bulk of commercial hip-hop.

But Arrow also distinguishes Blackalicious from the more positive, underground contingent of hip-hop. Insert a few "conscious" (but ultimately trite or cliché) nuggets into a formless, stream-of-consciousness rap, and an MC is said to be "droppin' knowledge." Gab sticks to a particular theme, in contrast to so many hip-hop tunes that change course whenever the MC runs out of thematic punch lines. Gab crafts real songs that impart real insight, whether he's chronicling an imploding society on the brink of Armageddon in "The Sky Is Falling" or musing on life's never-ending journey and infinite possibilities on "First in Flight." Rhymes Gab: "Rise/If you're sleeping, won't you open your eyes again/The greatest high be that natural high within/ No need to force the progressions, just ride the wind/You'll know the answer to the where, the why, and when/If you keep working for your search you'll find the end."

That's certainly a far cry from radio-friendly choruses like "Pass the Courvoisier!" or "Welcome to Atlanta where the playas play/ And we ride on dem thangs every day." But more important, while many underground rappers pontificate on the degenerate state of hip-hop, "First in Flight" focuses less on diagnosing hip-hop's disease and more on Zen-like notions of faith. Blackalicious, it seems, is leading by example.

"A lot of times within rap," offers X, "we spend too much time talking about what rap should be, instead of making it what it should be. With this record, we didn't really focus on the state of rap as we did the state of the world."

Gab, who calls himself spiritual but not religious, takes it one step further: "The whole concept behind Blazing Arrow is faith. Nia was about finding a purpose, and Blazing Arrow is about, now you found it, now you have to have the faith to walk it, to live it. You found your purpose, but 10 minutes later, something might come along and distract you. So it's about staying [true] to that purpose."