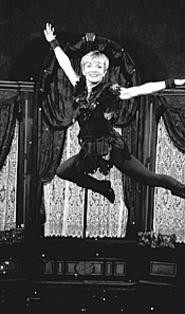 After nearly 20 years and 2,600 performances, Cathy Rigby is hanging up her tights. Once the tour winds down sometime next year, Rigby will be Peter Pan no more. "I wanted to leave at the top of my game," she explains. "It's been a very special role for me, and I wanted to make sure that when I finished it, I was vocally and physically at my best."

When the award-winning gymnast first portrayed the boy who refused to grow up back in 1986, it was an obvious and easy fit, she recalls. "Having the athletic background helped," she admits. "But it was an opportunity to live a childhood that wasn't structured. It was a spontaneous and mischievous role."

Temporary Inanity
Until its new digs are built, Ground Floor's winging it.

Ground Floor Improv Theater isn't waiting for its venue (which is still a vacant lot) to open this summer. The troupe -- which includes a dozen performers from local comedy crews the Public Squares and Cabaret Dada -- already has a weekly gig at a temporary spot, B-Side Liquor Lounge. "It's improv, so you don't know what you're going to get," says executive producer Jack Santo. "I told the guys, 'It's no-holds-barred. Do what you want.'" When its own theater opens, Ground Floor plans to incorporate sketch comedy, but for now, the group works entirely in improv exercises. "Some shows, if you see them, there's no reason to come back for three months," says Santo. "I want people to come back next week, so we always do something different." The Ground Floor convenes at the B-Side (2785 Euclid Heights Boulevard in Cleveland Heights) at 8 p.m. Thursday. Admission is $12; call 216-323-4677. -- D.X. Ferris

A Bastard's Life
Actresses tussle over stage vs. screen in the latest from Beck Center.

Once Meg Chamberlain read the script to Stage Door, the seasoned director knew she'd found enough estrogen-fueled parts for all the teen girls in her Youth Theater class. The play is set in 1936 in a New York boarding house, where 26 aspiring actresses bicker over whether its better to perform on stage or on the silver screen. "There are people who still make that argument today -- that Hollywood is a step below," says Chamberlain. "It's legitimate theater vs. the bastard." Stage Door is at the Beck Center for the Arts (17801 Detroit Avenue in Lakewood) Friday through March 13. Show times are 7:30 p.m. Friday and Saturday and 3 p.m. Sunday. Tickets are $8 to $10; call 216-521-2540. -- Cris Glaser

They Reign in Spain

Classical guitarist David Russell pays tribute to some of Spain's greatest fretmen on his new CD, Spanish Legends, an invigorating and soothing project that features some fine fingerwork by Russell. He performs compositions by Andrés Segovia and others at 8 p.m. Saturday at Case Western Reserve University's Ford Auditorium, 11000 Euclid Avenue. Tickets are $22, available by calling 216-752-7502. -- Michael Gallucci