Legend in the Making 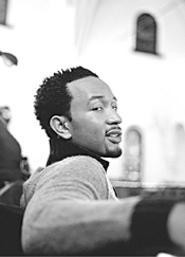 Until recently, neo-soul crooner John Legend was known as John Stephens, his given moniker. Legend says he made the switch to draw more attention to his work and to challenge him with "a higher standard to live up to." It seems to have worked.

In addition to seeing Get Lifted, his major-label debut, quickly go platinum after its December 2004 release, the singer performed at the Grammys in February, notched a hit song on the Hitch soundtrack, and played Stevie Wonder on the NBC series American Dreams. Legend is starting to live up to his new name, though he believes he's the same man, no matter what he's called. "Some people may try to differentiate it, make it a split-personality thing," he allows. "But me being a musician, an artist, a performer -- it's such a huge part of my life. It's all me."

An Ohio native, Legend was raised by a devout family, so it was only natural that he would become involved with the Bethel AME Church in Scranton, Pennsylvania, upon relocating to the area in his mid-teens. He served as its pianist, choir director, and eventually, head of the music department between 1995 and 2004, using the salary he received to help pay his tuition at the University of Pennsylvania. In 1998, while still a student there, he played keyboards on "Everything Is Everything," a highlight of Lauryn Hill's Grammy-collecting solo debut, The Miseducation of Lauryn Hill -- a killer credit, especially since Legend was still shy of 20. More exceptional opportunities would follow thanks to white-hot producer Kanye West, who happens to be a cousin of Legend's roommate at Penn. By taking advantage of this connection, Legend has contributed either vocals or instrumental flourishes to an astonishing list of high-profile recordings over the past couple of years -- most notably, West's The College Dropout, Jay-Z's The Black Album, and The Diary of Alicia Keys.

Material like this came from a far different place than the music he continued to make at church on Sundays, and the same was true of some songs that found their way onto independently issued solo platters put out under his given name: 2000's John Stephens, 2001's Live at Jimmy's Uptown, and 2003's Live at SOB's. Not everyone in his orbit was pleased by the disparity. "There are definitely people back in my hometown who wish I was only doing gospel records, and I understand that," Legend says. "But I make music that I feel reflects all of my life and not just part of my life. For me not to talk about things like dating just doesn't feel right. I need to talk about my life and the things I think about.

In contrast, Legend likes to juxtapose the sacred and the profane, and he does so effectively on Get Lifted, which was executive-produced by West and put out on his custom imprint, Getting Out Our Dreams, which is distributed by Columbia Records. "It Don't Have to Change" is a modified spiritual that employs a chorale made up of Legend's father, mother, grandmother, siblings, aunts, uncles, and cousins -- 15 relatives in all. Yet he's just as comfortable crooning in the presence of no less a sinner than Snoop Dogg, who intros "I Can Change," a tune that represents another angle of personal transformation. In it, Legend pledges to "go to church, get baptized" and "give up on the pimpin'" for the sake of his baby.

Musically, offerings like the ridiculously catchy "Used to Love U," co-written with West, contain the occasional new-millennium production touch. For the most part, however, Get Lifted bows to old soul verities. "There's nothing new under the sun," Legend acknowledges. "But I think we do a good job of fusing today with yesterday."

That's certainly the case with Legend's breakout hit, "Ordinary People," which is basically Legend alone at the piano, crooning mellifluously about the uncertainties of relationships: "Maybe we'll live and learn/Maybe we'll crash and burn." The track was hardly the most obvious choice for a lead single, but DJs in Chicago and Detroit who received a pre-release sampler began spinning it, and their listeners' reactions convinced Legend to take the risk. "Me and Kanye, we had a conversation about it, and we were both committed to it," he says. "And when me and Kanye are committed to something, it's difficult for the label to disagree with it."

Still, execs wanted to hedge their bets. "There were some people at the label saying, 'Can we do a remix, so if some of the hipper, younger stations aren't into the album version, or we want to get it into clubs, they'll have something to play?'" Legend recalls. "And I said, 'Sure, if you want to do remixes, fine -- but I really want to lead with this acoustic-ballad version,' because it's so special, and so singular on the radio right now."

The strategy paid off handsomely, but Legend says, "I don't think you could go back and figure out why it was the right time to come out with this kind of song. 'Jesus Walks' is the same thing. No one could have said beforehand, 'Now's the time to put out a song about Jesus,' but because the beats on it were so great and the writing on it was so great and the energy and the spirit Kanye put into the song were so great, it worked. And the same thing happened with 'Ordinary People,' because it's so universal. Everyone tells me that song's about them. They tell me, 'You were looking in my window when you wrote that.' Who knows if I'll ever duplicate it?"