Ron Isley revisits the Burt Bacharach catalog with Here I Am. 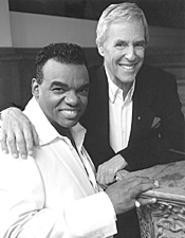 There are few embellishments on the cover of Here I Am: Isley Meets Bacharach. There are neither gold lamé suits nor tuxedos, no silk sheets, and no flashy stage shots. Burt Bacharach and Ron Isley, clad in sweaters, merely smile in front of a chess board -- a testament to their status as masters of modern music. History is the album's only packaging.

Isley and Bacharach are among a select group of living artists whose work has remained vital through the generations. This has resulted in cameos for Bacharach in such post-modern works as the Austin Powers film trilogy and tributes by artists like the White Stripes (who covered his "I Just Don't Know What to Do With Myself"). For Isley, a longtime member of the Isley Brothers, this has led to frequent collaborations with R. Kelly and last year's Body Kiss, which debuted at No. 1 on the Billboard album charts.

As one of the true pioneers of R&B and soul, Isley makes music with a sonic purity that has resonated over the past five decades. Meanwhile, Bacharach's songs convey complex yet universal emotions through simple, sophisticated melodies and lyrics. Few are capable of using vulnerability to their advantage the way these men can. It was the idea of DreamWorks executive John McClain, however, to finally bring the two lovesick artists together.

"Burt is a genius," declares the 62-year-old Isley, whose career first intersected with Bacharach's when the tenor was a member of the Isley Brothers more than 40 years ago. "I was supposed to do 'Make It Easy on Yourself' with him in 1962, but someone changed the words, and Burt didn't want us to do the song. So we got 20 minutes left in the studio, and we did 'Twist and Shout' on the B-side. It became such a huge hit that we seemed to go in that particular direction, fast songs."

At the time, the last-minute change seemed like divine intervention to the Isley Brothers. "Twist and Shout" earned the band some remarkable fans. "John Lennon said [the Beatles] originally started their style imitating the Isley Brothers," he says. "That's what they told me. They recorded 'Shout,' and people from all over came to see them jumping around just like we were jumping around." That same year, the brothers toured England to an enthusiastic response. "Elton John was in the band. He was our keyboard player," Isley recalls. "They said, 'We got to take this guy. He looks kind of funny with those thick glasses, but he's the best keyboard player.'"

As Isley mentally flips the pages of his memory's photo album, he rarely pauses for regrets, putting his trust in destiny. More than 41 years after his group's ill-fated recording session with Bacharach in 1962, he got a chance to record "Make It Easy on Yourself," one of 13 songs he interprets for Here I Am along with other staples like "Alfie," "The Look of Love," and "Windows of the World." A master songwriter, arranger, and producer, Bacharach elevates these versions to an almost theatrical level, tailoring string arrangements that give Isley the right context to swell and stretch notes with emotion that is both sexually charged and tender.

Isley feels that, for his part, he has contributed a soulful sound and an appreciation for what makes a great love song. He appreciates Bacharach's work because, he says, "the lyrics are straight to the heart, so everyone can understand them. It's not above people. 'Look of Love' -- that's saying exactly what you see, looking across the table on a certain night. If a man is saying these words to a woman sitting across the table, she's about to melt. "

The two legends co-produced the album at the historical Capitol Records studios in Hollywood, where such musicians as Frank Sinatra and Nat "King" Cole cut some of their most memorable albums. "That was Burt's idea, because he knew he was going to use those strings, and that's the best studio in the business for strings," Isley says. "I wouldn't have had it any other way."

Overall, Isley says, the recording process was unlike any other he has been involved in. "We did 'Alfie' in one take," he recalls. "There was an audience of people in the control room. All of the musicians after the song were standing up and applauding and yelling. People were crying. It scared me a little, but it was magical."

Among those moved to tears was Denzel Washington. "He and John McClain are good friends," Isley explains. "When John told him I was in the studio, he was on the way to an appointment. He canceled his appointment to stay in the studio for two or three hours."

Maybe it was that moment McClain envisioned when, in the press release for Here I Am, he called the album "a refuge, a reprieve from everything bad about not only today's music, but the world. It is the kind of recording people can put on, relax, and get their whole life in perspective."

Isley seconds the label executive: "It's the best thing I've ever done. I try to think of albums that I think are great, like Marvin Gaye's What's Going On or Natalie Cole's Unforgettable. I put this before all those. I listen to this, and I don't believe it was me. It's going to stand out as a great piece of work."