Now cleaned up and settled down, Nikki Sixx plugs into a new vibe. 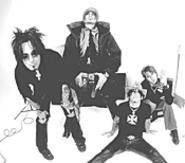 Mötley Crüe bassist Nikki Sixx has been rock royalty for more than 20 years. He's toured the world. He's headlined stadiums. He's written anthems. He's sold millions of albums. He's shagged everything within reach. He's died twice. Now he has a new band, the Brides of Destruction, and he's finally set to achieve one of his lifetime goals: playing the world's most infamous dive.

"With Brides, the very first thing I wanted to do was to play CBGB's, because I never got to," Sixx says of the New York City joint. "Mötley never played clubs. We played some clubs in L.A., and then it blew up. It's all brand-new again. I'm just looking forward to playing our music, and not being focused on anything other than that."

The altered focus he speaks of harks back to the Crüe's legendary debauchery, exploits graphically detailed in the autobiography The Dirt, one of rock's great tell-all books. As the Crüe's success grew, Sixx's taste escalated from Löwenbräu (hence the umlauts in Crüe) to Jack Daniel's to heroin. Touring the world with a gorilla on his back, Sixx bottomed out in 1988, when he mainlined two heart-stopping overdoses in the same day.

With the help of Alcoholics Anonymous, Sixx has been clean for years, but some things you just can't get out of your system. Especially when you keep the same company. Sixx stayed in touch with Tracii Guns, the former Guns & Roses guitarist who went on to found glam-metal also-rans L.A. Guns. For Guns, living off mammoth royalty payments wasn't an option, and he pursued music while Sixx was raising a family.

"Tracii Guns pulled me out of the mansion on the hill and pulled me back into a rehearsal room, and got me where I should be, with Brides of Destruction," says Sixx, born Frank Ferrana in 1958. "He got me into the studio, where I should be. I feel alive. I need this."

"We wanted an unknown singer," says Sixx. "We wanted Brides of Destruction to live and die by its own sword musically. He's a completely unique individual, and that's what we wanted. He's original, but he changes day to day. He's a different animal. That's what makes him exciting. He's a star."

He's also a writer, as are the group's other players (including drummer Scott Coogan). With Crüe, Sixx broke the rules by being a high-profile bassist, but he still received little recognition for his major contribution to its material, from the seminal faux-evil of "Shout at the Devil" to the nudie-bar staple "Girls Girls Girls" to the (for better or worse) groundbreaking ballad "Home Sweet Home." The song cost Crüe many a fan, but won it millions more.

Hardcore heshers disavowed the group after it went glam with '85's Theatre of Pain, which quickly went double platinum. But it's impossible to overerestimate the permanent influence that '81's Too Fast for Love and '83's Shout at the Devil had on the forming phenomenon: Crüe made umlauts and pentagrams permanent fixtures in metal iconography. Equally popular with both sexes, they were the top cover boys of metal magazines throughout the '80s. And while women stuck with the band as it became an MTV favorite, the Crüe was a gateway metallic experience for a generation that would move on to the likes of Metallica, Sepultura, and Pantera. Korn's Jonathan Davis has cited them as one of his favorites, and Slipknot's Joey Jordison said they were a major influence on his red-and-black glam side project, the Murderdolls.

"I've never been a big fan of the word 'metal,'" says Sixx, who covered the Beatles and Elvis in Crüe. "I like 'rock and roll.' I don't really know what [Crüe's] place in history is. We covered a lot of different ground, and to be a metal band, you can't do that. Metal bands are more one-dimensional, as is a punk band. Who's to say that Tracii Guns isn't going to come in with 'Hey Jude'? You have to be open to that."

The Brides' debut, Here Come the Brides, plays like Mötley Crüe's underrated Too Fast for Love combined with the hoarse melodies and cocksure swagger of early Kiss. Mixing glam, punk, and grit, the rough-and-tumble disc rocks faster and harder than anything Crüe has recorded in over a decade. The album closes with the ballad "Only Get So Far," which Sixx co-wrote for country stars Faith Hill and Tim McGraw. The song isn't so surprising, considering that recent years have given him plenty of time to explore his softer side.

Now blissfully wed to Baywatch girl and model Donna D'Errico, Sixx is living a different kind of high life. Years of arena-sized excess have provided him with the luxury of being a full-time parent, and the couple are raising a pack of five children in the same California neighborhood that Mel Gibson lives in. The hooligan's holiday from rock is an endless string of play dates, soccer, and -- gasp -- church.

"My three-year-old has me so whipped," he says. "She has me wrapped around her finger. It's the best." Better than the mojo of spellbinding strippers? "Way better than strippers. And she's more intelligent, too."

Sixx says that Crüe plans a farewell tour in conjunction with an upcoming movie version of The Dirt, but the Brides are as permanent as his new tattoo of the band's iron-cross logo. Signed to the major indie label Sanctuary, the band turned down the Kiss-Poison tour to stand on its own merits. Visiting only big clubs and small theaters, the Brides' "Honeymoon From Hell" tour won't feature flying drum risers -- just rock and roll within reach of sweaty fans. Sixx promises 90-minute sets, and while he won't go into details, he says there'll be "a lot of old stuff." He takes being a husband and father seriously, but the backstage action should still be very lively.

"With the territory comes certain things," he says. "You can indulge or not indulge. I choose to not indulge. Sometimes being a voyeur is just fine. I would never want to be a single, shooting-dope, fucking-every-stripper guy again. I'm glad it happened, but I'm really digging where I'm at in life right now. The family grounds you. And when you're grounded, you can kick some ass."