The FBI stalks John Lennon in Dobama's Ears on a Beatle. 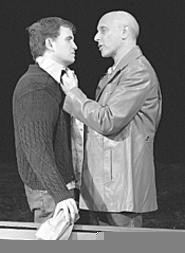 A few years ago, it was hard to explain the distrust people felt for government in the 1960s and '70s, because if you weren't there, you just didn't get it. Well, lots of folks are getting it now -- especially the woman who was handcuffed and arrested for wearing an anti-Bush T-shirt at a Republican rally (she was a bit irritated with the President, since her soldier son had been killed in Iraq). Freedom of speech apparently is acceptable only when the speech is preapproved by the administration in power.

Back in the tie-dye years, the FBI was sniffing around many protesters of the Vietnam War, including ex-Beatle John Lennon and his wife, Yoko Ono. And in Ears on a Beatle, now at Dobama Theatre, playwright Mark St. Germain imagines what it might have been like for two domestic spies on the trail of the outspoken couple. Instead of becoming a predictable political screed, Ears focuses on the arc of the two agents' lives and attitudes, from the early '70s until Lennon's violent death in 1980. By repeatedly addressing multiple conspiracy theories, but never truly engaging any, St. Germain's script can be faulted for a weakness of political spine. But the story is told so compellingly by the Dobama performers that the result is thoroughly satisfying.

At first glance, the two FBI snoops appear to be time-honored stereotypes. Howard Ballantine is a veteran, jaded by his service in a department still fueled by J. Edgar Hoover's panting (and, we were later to learn, pantied) paranoia. Howard has little use for the hippy-dippy sentiments of love coming from Lennon and sees the singer's words and thoughts as potentially threatening to the country's safety. So the FBI's answer, egged on by the Nixon White House, is to bug Lennon's phone, harass him, and try to deport him before he can swing young, newly enfranchised voters to the Democrats.

Meanwhile, Howard's fuzzy-faced partner, Daniel McClure, is trying to balance his new allegiance to the agency with a tendency to respect the values of the antiestablishment community. Working undercover because of his age, Daniel is growing close to a woman named Ann, who has just recently decided to be called "Peace." Posing as an out-of-town weaver without a loom, the novice agent is conflicted at every turn by what his job requires.

Moving the story forward through a series of conversations between Howard and Daniel, the playwright does an exceptional job of capturing the tone of the era while developing the two snoops as far more than cardboard cutouts. We soon learn that Howard is not inherently evil, belying one of his early cynical comments: When Daniel asks whether he votes, Howard replies chillingly, "I don't . . . Either way, we win." But in his personal life, his daughter, Katie, lines up all her dolls on a windowsill and affixes an anti-war button to each. And later, once she learns Daddy is FBI, she won't speak to him.

St. Germain deftly incorporates humor in these dialogues, which helps the audience relate to the characters. When J. Edgar dies in 1972 and his body is laid out in the Capitol rotunda, Howard wryly observes that half the visitors who stand in line are probably just double-checking. And when Daniel reveals that Ann is pregnant and that he wants to resign to marry her, Howard shrugs and says, "You never should have seen Love Story. " Howard also displays his humanity when, dressed as a phone-company serviceman, he accidentally meets Lennon and ends up sharing a beer with him in his apartment. Such are the complexities when a "target" morphs into a real person and the subject of an ominous dossier is discovered to be an essentially harmless dude with a pretty cool sense of humor.

Dobama's two-person cast handles this material with consummate skill. Joel Hammer is a lean, bullet-headed hardass as Howard, glaring at Daniel with venom as he tries to whip his careless understudy into shape. Then we see the elder spy soften and adapt to a world that isn't as black-and-white as his endless files would have him believe. Andrew Tarr plays disheveled Daniel, showing an eager, easily bruised idealism ("What is my job? Just digging deeper and deeper into people, until I find the worst in them?") that transforms him, ironically, into a polished company man. Director Charles Kartali keeps the 90-minute production beautifully focused, helping his actors explore these layered, fictitious lives within a historically accurate framework.

Among many telling moments in the play, perhaps the most poignant is the recalling of John Lennon's response to a question about his personal safety. He explained that serious people get killed, but that he and Yoko were the clowns; they were Laurel and Hardy. Why would anyone shoot him? Why, indeed.