The architect of '80s jangle pop returns after 18 years. 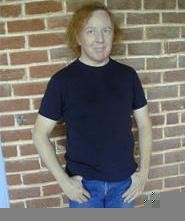 To grasp what Mitch Easter achieved in the early '80s, you have to turn back the clock -- to a time when simple guitar bands crafting bright melodies sounded fresh and new.

In 1981, college radio couldn't stop spinning "Radio Free Europe," the first single Easter scored big with as a producer. Having just built a makeshift studio in his parents' North Carolina garage, Easter recorded the tune for an obscure southern band by the name of R.E.M. "Radio Free Europe" sounded nothing like the overproduced slabs of commercial cheese-whiz then inundating mainstream radio. And it had zero in common with the abrasive hardcore and post-punk emanating from the underground.

Later that year, Easter formed Let's Active. Like R.E.M., the band celebrated the simple joys of strummed 'n' twanged guitars, with a driving beat and catchy vocals. But this proved too revolutionary for mainstream radio, which didn't touch the band and took years to embrace R.E.M. So Let's Active became a college radio staple, eventually making its way to MTV's 120 Minutes. This, of course, inspired Spin and Rolling Stone to come calling, and before you knew it, rock journalists had cooked up the now-dreaded "jangle pop" tag for Let's Active, R.E.M., and two other bands Easter worked with: the dB's and Game Theory.

"The jangle word makes my skin crawl," says Easter from his studio in Kernersville, North Carolina. "I just hate it. But you know, it's just inescapable. Okay, like, that word does kind of apply to 'Turn, Turn, Turn' by the Byrds, maybe. But it doesn't even apply all that much to R.E.M., you know."

Let's Active ended in the late '80s, and Easter opened his Fidelitorium Recordings in a North Carolina country house, going on to produce recordings by Pylon, Marshall Crenshaw, Game Theory, the Loud Family, Pavement, and more.

But for much of the '90s, Easter didn't pick up a guitar.

"After Let's Active, I really felt that I personally was about as out of fashion as you can get. And I just kind of didn't know what to do," he says. "I was sort of out of the age bracket of people who start bands."

But after nearly 20 years of studio work -- a constant reminder of "how much I really like playing live" -- Easter once again craves making pop music and playing gigs. With wife Shalini Chatterjee on bass and former Let's Active drummer Eric Marshall, Easter has been applying the finishing touches to Dynamico, his first album in 18 years. What's more, he's hitting the road. Featuring just a handful of Let's Active tunes, Easter's current live set spotlights the soon-to-be released record, a sample of which can be heard on his website (mitcheaster.com).

"Stylistically, I think, it all fits together," explains Easter. "I'm just waiting for the review we get somewhere that talks about '80s this and '80s that and stuff."

Exhibiting that same airy voice, Easter can still craft upbeat and infectious hooks, intricately layered with nostalgic synth sounds and, uh, jangly guitar work. Still, the J-word totally bugs the guy. In the '80s, "It was damning with faint praise, and it also seemed to be putting you into this, like, wimpy category -- there were these tough bands, and then there were these wimpy jangle guys that just sing about girls and wish that it was the '60s."

It didn't help that for Let's Active's first video, 1983's jangle-pop classic "Every Word Means No," Easter sported eyeliner and poofy hair, singing to a puppy. Wimpy? Who's to judge? But the cuteness lives on YouTube.

"It's just a word now, just a generic term for anybody who did this melodic sort of stuff," explains Easter. "Since our music isn't about drugs or anything scary, you know, then that's fine, I just -- I give up. All I ever called it was rock music, and I realize that 'rock music' is also very unspecific."

What about the word "pop"? Well, that word also doesn't work for Easter because his music ain't even popular. Besides, pop these days "is the most despicable music ever -- the teenagers with headsets doing dance steps. In the '80s, pop meant the bands that were kind of melodic, who were a product of the punk thing but really weren't punk bands," he says.

All jangle-induced anger aside, Easter just feels glad to have played a part in the explosion of American indie bands during the do-it-yourself '80s.