While it stumbles after dark, Moxie is hard to beat for midday dining. 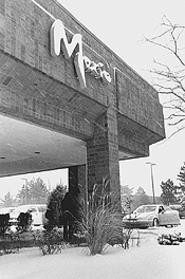 When the noonday sun shines through Moxie's big, south-facing windows, turning the walls to a buttery shade of yellow and the pale hardwood floor into shiny gold, the restaurant is at its best.

That's when Moxie's compact menu of well-prepared soups, salads, sandwiches, and light entrées; its cadre of fleet-footed, black-garbed servers; and its bright and energetic atmosphere make the sleek Beachwood restaurant an ideal spot for closing yet another multimillion-dollar deal or for relaxing after a hard morning of moving and shaking. Even better for the rest of us, thanks to prices that you don't have to be a stockbroker to love, Moxie is also a popular lunchtime destination for area shoppers, food lovers, and other hungry seekers yearning for a midday culinary shot in the arm.

The Richmond Road restaurant opened in 1997, the brainchild of partners Brad Friedlander and Craig Sumers, who wanted to create a youthful, urbane setting for fine dining. In Culinary Institute of America graduate Doug Katz they found the executive chef who could combine their vision with his own and move Moxie into the limelight, with what Katz calls his seasonal menu of "rustic American cuisine."

Nevertheless, there is nothing rustic about Moxie's setting, which is instead an artful blend of New-York-style moderne and contemporary influences, with a handful of quirky individuality thrown in for good measure. If the large, open stainless steel kitchen is one of the restaurant's focal points, the other is certainly the attention-grabbing mural that runs halfway around the main dining room at ceiling level. Painted over the course of 90 days by Clevelander Paul Shuster, the mural is a collection of themes and images that set the tone for the one-of-a-kind restaurant. Even the one-page menu is pure Moxie, with its long and comprehensive list of playbill-style "credits," acknowledging everyone from the Director of Operations to the kitchen assistants, and naming Friedlander and Sumers as "Executive Producers."

A few steps up from the spacious main dining room is the restaurant's intimate bar. While the three-martini lunch is pretty much passé, Moxie's bartenders can still whip up an assortment of mean martinis, including the Cosmopolitan, with Absolut, Cointreau, lime juice, cranberry juice, and a slice of orange; or the Pink, with Stoli, Campari, and a twist. A large and comprehensive wine list offers selections by the bottle, half-bottle, and glass, and includes single-malt Scotch, ports, and dessert wines.

Our most recent Moxie lunch was a fine example of the painstaking preparation and full-bodied flavors that Katz and his crew can dish up. We began with the soup of the day, a nontraditional take on French onion, with a large Asiago-topped crouton standing in for the usual layer of melted Gruy&eagravere. The dark-brown beef broth was filled with slender bits of tender caramelized onion and couldn't have been richer or more satisfying.

Our dashing bread "basket" was really a heavy spiral of wire lined with a white linen napkin. Inside were nestled thick slices of crisp-crusted ciabatta bread. For spreading, a housemade white-bean-and-olive tapenade made a savory alternative to butter.

Salad selections have always been a cut above at Moxie. An elegantly simple house salad, dressed with a classic balsamic vinaigrette, included an unusually wide assortment of impeccable mixed greens, a few slivers of red onion, and some finely diced tomato. On the other hand, an entrée-sized salad of mixed greens -- topped with a succulent leg of duck confit, salty pistachios, tart cranberries and orange slices, rings of pickled red onion, and chunks of creamy goat cheese -- in a cranberry-shallot vinaigrette was a mouthful of complex flavors that harmonized together in a chorus of good tastes.

We were also delighted with our Southwestern Chicken Wrap, made with a very large, delicate tomato tortilla filled with strips of moist chicken, lots of slow-cooked black beans, shredded cheddar cheese, juicy tomato salsa, and a sour-cream-and-avocado sauce. Toothsome and tender, the sandwich was served with a pile of Moxie potato chips -- big, waffle-cut crisps that arrived at the table fresh and warm.

We had expected our Tuna Burger to be a slab of grilled or roasted fish, especially after our server asked us how we wanted to have it done. But rather than being served as a filet, the tuna had been ground in-house, then seasoned with parsley, shallots, and toasted cumin and formed into a patty, before being dipped in soy sauce and pan-seared. After cooking, it was topped with a slice of tomato, a tangle of crisp watercress, and a smear of bright, not fiery, chipotle mayonnaise and loaded onto a big, shiny bun. We loved the sandwich's savory taste and delicate texture, even if it reminded us more of a Middle Eastern veggie burger than of fresh fish. The unusual sandwich was well-paired with a stack of warm, thin green beans that had been cooked to tender crispness and seasoned with chunks of sun-dried tomato, sliced kalamata olives, and briny bits of toasted fennel that brought to mind Szechuan-style dry-fried string beans.

However, if lunches at Moxie have been unmitigated pleasures, a recent dinner was a mixed bag.

We had nothing but praise for our starters, a wonderful chicken liver appetizer and another of Moxie's fine salads. The salad, a combination of thinly sliced, roasted red and yellow beets topped with mixed greens, large crumbles of goat cheese, and a tangle of crisp fried carrot threads, in a brisk and salty horseradish vinaigrette, was crisp and robust.

Even better, the meticulously prepared chicken livers were divine. Barely roasted, with the ephemeral smoothness of heavy whipped cream and the characteristically delicate, musky flavor of organ meat, the two large livers were served with wedges of roasted pear, a mound of buttery sautéed spinach, and a swoosh of thick, housemade pear butter. A dab of liver spread against a bit of sweet pear, almost like pâté, then drawn through the fruit butter, produced an unforgettable combination of tastes and textures.

Yet when it came to our entrées, the busy kitchen faltered. I had intended to order the braised lamb shank, but let myself be talked into the evening's special, a long-boned veal chop served with a roasted red-onion-and-goat-cheese version of tarte Tatin, and a savory mix of sautéed tomato, onion, and green watercress. "It's the best veal you'll ever eat," promised the server. But it was not. While I was a long way from pushing it aside, the large chop was neither especially tender nor especially flavorful. The accompanying onion tart was disappointing, too, with a soggy pastry shell and an unevenly roasted onion that could have used more time in the oven.

A second entrée, half of a large, herb-roasted chicken, smelled wonderful, but proved to be dry beneath its crisp, peppery skin. Even if it had been juicy and tender, there was so much meat -- and so little else -- on the plate that the dish seemed unbalanced. Two lovely wedges of sweet roasted parsnip and a bit of moist, wild-mushroom bread pudding were delicious, but they just weren't enough to keep us from growing weary of all that chicken. We wished we had ordered an additional side of roasted garlic mashed potatoes for $3, to help see us through the meat; but then again, we already had more food on our plate than we could eat, and the notion of ordering more, just to finish what the kitchen had started, seemed preposterous. "Less chicken, more parsnips," became our mantra.

On a more positive note, Moxie deserves credit for its array of out-of-the-ordinary desserts, some of which are excellent. Pastry Chef Carrie Potts turns out a wonderful Baked Hot Chocolate: a smooth, fudgy pudding cake, cleverly baked in a tea cup and topped with whipped cream and a wafer-thin cocoa cookie in the shape of a signature "M." Lemon Pudding Cake, baked in an individual soufflé cup, was also an unqualified winner, with a nice balance of sweet and tart flavors, and a velvety texture.

Still, we were surprised to find a Strawberry-Mango Parfait on a winter menu. The trifle-like construction of cake, white chocolate cream, bits of mango, and slices of hard, flavorless, out-of-season berries lacked zest, beyond its significant sweetness. And while we suspect the dessert could have been wonderful made with ripe, juicy, sweet June berries, it seemed ill-suited to this season.

Of course, there is a lot to be said in favor of a restaurant that can serve reliably well-prepared and delicious lunchtime fare in a sophisticated setting, as Moxie has proven that it can do. And while it may stumble with some of its dinner selections, for midday munching, Moxie is among the best.