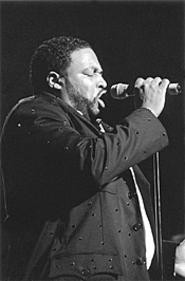 File this quote from Gerald Levert under truths you once held to be self-evident: "I still like women."

As anyone who's ever started a quiet storm with a Levert platter knows, the heir apparent to Barry White, really, really likes women. Yet the leading R&B loveman feels compelled to reassure those taken aback by his latest album, the politically themed Do I Speak for the World. Hardly a Public Enemy polemic, it still contains plenty of bait for the boudoir, but when those amorous activities are interrupted by the voice of radical Princeton professor Cornel West, some will doubtless wonder: What's up with G?

"Basically, it's my coming of age," explains Levert from his Cleveland home. "I listen to a lot of hip-hop, and they speak on a lot of issues, but I didn't hear anyone in R&B speaking on the drug issue, the crime issue, the war in Iraq. I wanna be a voice like the Marvin Gaye or the Stevie Wonder of the day."

To most contemporary performers, such artists are distant icons. But to the 38-year-old Levert, the son of O'Jays vocalist Eddie Levert, they're his father's friends and contemporaries, and he has no hesitation in invoking their names to set his own musical course. After helping create new jack swing in the mid-'80s with the trio LeVert and then establishing himself as a bear-voiced bedroom crooner extraordinaire during a solo career that began in 1991, Levert radiates the serene confidence his bloodline suggests.

However, he readily admits that the spark behind Do I Speak for the World was his own confusion. "I watch the news a lot, and a lot of things I don't understand. Like the election, that really threw me off," he says. Inspired by outspoken icons on both sides of the political divide -- he mentions both Michael Moore and Mel Gibson -- and with a backlog of topical songs never deemed suitable by his label, Levert began to wonder, "Why am I holdin' back?"

"The title came from, I just wonder, is it other people that feel the way about the world and the way the world is going that I do?" he asks. "Because I feel that the world is headed toward the end. I'm not tryin' to preach to anyone or say that they gotta agree with my thoughts," Levert, raised a Jehovah's Witness, adds, "[But] all the things that was said in Revelation is comin' to pass."

Take that surprisingly ominous worldview, couple it with the planned title of the album, Crucify Me (the hard-hitting song of that name, introduced by West and radio talk-show host Tavis Smiley, did make the record), and it's perhaps understandable that Levert's new bosses at Atlantic "were really scared" after hearing his plans.

Levert had second thoughts, though, when Atlantic took over his old label, Elektra, before the album's release, so he included some more traditional relationship songs. "I didn't wanna force-feed [Atlantic]," he says. "With the new regime, I wanted to make sure they were behind me.

"I'm proud of the record, even if people don't understand it," Levert adds. "My dad and them used to do it, have the love songs and the social commentary, so it's come full circle for me."

On his current father-son tour with Eddie Levert, there will be little of the material from Do I Speak for the World in the setlist (he's saving most of it for a solo outing in 2005). Instead, the duo will pay tribute to a series of departed R&B legends -- "People we knew, who touched us personally, as well as musically," like Ray Charles, Otis Redding, Grover Washington Jr., Barry White, and Rick James.

"Matter of fact, Otis Redding's last show was here in Cleveland," recalls Levert. "My dad was at that show -- [the O'Jays] were supposed to open for Otis, but then his plane crashed the next day." White, meanwhile, "was always like my father's brother. He was like an uncle to me." (Levert would grow up to write one of the sweet-talking legend's biggest hits, 1994's "Practice What You Preach.")

"Rick James was a friend -- he idolized my dad," Levert continues. "If you listen to a lot of the ballad stuff, he was doing a lot of my dad's riffs, and he would tell you in a minute that he patterned his vocal style after my dad."

The tributes run even deeper than family ties, Levert says. He serves on the board of the R&B Foundation, which provides financial help to veteran soul performers, some of whom have been cheated of their rightful earnings. "The older entertainers of the '70s didn't have the opportunities that the Jay-Zs and Puff Daddys have now," explains Levert. "These people paved the way for us. They made the music that we still dance to. So I think there should be somebody of my generation who's a fan and does support what they've done for us."

Of course, recent years have produced a '70s-worshiping contingent of young "neosoul" artists, such as Maxwell and Erykah Badu, who instantly won attention that the less-flashy Levert has often struggled to earn, despite the similarities in their sounds.

"Neosoul, to me, is just people who got dreadlocks and African garb, and don't wear no shoes," Levert says, a hint of annoyance creeping into his good-natured tone. "They makin' good records, but at the end of the day, they still gonna be in the R&B section with all the other black folks."

Levert quickly drops the subject, however. He has other battles to fight -- including a few, he admits, with his famous father. "We have a difference of opinion on a lot of things," he says. "We sometimes clash. Everything ain't always roses.

"But he doesn't mess with me too much anymore," says Levert. "because I did go out there and prove that I can do this -- write and produce, all things he told me I should do. And now it's basically mutual respect between us."