Life in the Kill Zone

Good schools and free cable satiate residents in the shadow of the Perry Nuclear Power Plant. But evacuation plans are never far away. 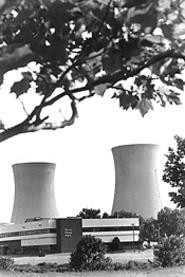 From inside Champions Garden Towne, the wailing at first sounds like a police siren at extremely close range -- in the parking lot, perhaps, or just outside on North Ridge Road. Only after a few moments, when the tone fails to change pitch or intensity, does the situation become clear. The sound is screeching from the county's emergency sirens, placed at 76 strategic points across a 10-mile range. It's nuclear meltdown time.

The good people in Champions, a farmer's market just one mile south of the Perry Nuclear Power Plant, continue to select their peaches and Amish cheeses calmly. The sirens shriek for a few seconds before the checkout clerk even looks up. She cocks her head to the side. "Yep," she says. "It must be Wednesday."

For the 156,000 people who live in Perry Township, North Perry Village, and the outlying 10-mile radius from Painesville to Geneva, sirens are a fact of life. No one gets upset. No one wonders aloud about the plant's safety or if, this time, the warning is real. They're used to living here. They're used to Perry.

The potential danger comes in radiation, the release of energy in atomic particles. Radiation is everywhere and is harmless in small doses. But if the plant would accidentally release large doses, neighbors could be poisoned. And if the water surrounding the splitting pellets would somehow drop precipitously, the heat energy would become too great, the plant would blow, and the entire area would be microwaved. Wags call the 10-mile circle around the plant "the kill zone," although a big accident could unleash problems far beyond that area.

The company that runs the Perry plant, the FirstEnergy Nuclear Operating Company of Akron, says none of that is going to happen. "Every safety system has two or three backups," says Manager of Communications Todd M. Schneider. "If one should go out of service, the other one kicks in." Radiation levels in the plant's neighborhood are only a tad higher than the rest of Cleveland -- and no higher than in high-altitude cities without nuclear plants, like Denver. The Nuclear Regulatory Commission believes neighbors are safe. "Our standards are designed so that a person living around a nuclear plant is not exposed to any additional hazard," says spokesman Victor Dricks. "There have been hundreds of studies that have looked at the effects of living near a nuclear plant. And the consensus of these studies is that there is no effect."

Yet no matter how safe experts say Perry is, life in the kill zone has its quirks. Residents are blasted with three-minute tests of the emergency siren system four times a year -- always at 11 a.m., always on Wednesdays. The sirens are ostensibly also in place for tornadoes and flash floods, but the main purpose is the plant. If they sound on any day other than Wednesday or at any time other than 11 a.m., people across the zone know to flip on their televisions or radios and wait for instructions.

Emergency plans detail two possibilities, based on the size and scope of the incident. Residents must either take shelter or leave town. Area telephone books spell out protocol for each option in detail.

The shelter plans don't mess around. "Close all doors, windows, and vents. Turn off all fans, air conditioners, and any other source of outside air. You might need to warn a friend or family member. If so, limit time spent outdoors. While outdoors, cover your mouth and nose with a damp cloth or towel. When returning indoors, leave outer clothing outside. Wash your face and hands with mild soap and lukewarm water. Begin storing water in containers for drinking and cooking. Do not pick produce or fruit."

Evacuation is no less serious. "Prepare your home for a three-day absence . . . Use one car per family. Close all car windows and vents."

A new precaution could add to the emergency plans. Government agencies are debating the merits of a mass dispersal of iodine pills. If taken shortly after a radiation release, the pills are about 50 percent effective at preventing thyroid cancer, the biggest health problem created by the 1986 Chernobyl disaster. After that Soviet-designed reactor exploded, 31 people, mostly firefighters, died immediately. Estimates of how many later died because of radiation vary widely, but thyroid cancer was widespread.

No one doubts the pills could help. But some officials have resisted distribution because they fear neighbors will view the pills as a total solution and ignore evacuation calls -- perhaps causing bigger problems in the process. "The pills just protect one area: the thyroid," says Vernon Higaki, the operating company's supervisor of emergency planning. "They don't protect your whole body. People taking the pill might be misled into thinking they're protected or take their time. And our idea is, we want the people out of there."

With life and death perpetually in the balance, it's no surprise that a certain morbid humor flourishes among Perry's neighbors. Residents kid each other about mutated wildlife and radioactive waste. "We get tomatoes the size of basketballs," jokes Perry Township Trustee Tom Advey. One North Perry woman says that "five-legged deer" race through her backyard.

Marie Lightner, age 64, lives on Lakehurst Drive in the shadow of the plant's massive cooling towers. The 512-foot twin urns were designed to release the steam generated by the plant, although only one is currently in use. Rising above its curved lip is "a nice little cloud," Lightner says. She doesn't worry about radiation or disaster. "If you're living here or in Kirtland, what's the difference?" she asks sweetly. "If something happens, you'll feel it either way."

Lightner is aware that the emergency plans tell residents to keep an overnight bag ready, just in case. She doesn't. "There are so many different safety checks they do, I have to trust them."

Since Perry opened in 1989, its operators have systematically wooed the locals. "Plant tours" have packed in as many as 15,000 people in a single weekend, Schneider says. An ongoing program gives Boy Scout and Cub Scout troops an up-close view. And since the plant is Lake County's biggest employer, the area's identity has become inextricably linked to it. The official seal for Perry Township even features the mighty cooling towers, surrounded by an evergreen or two.

There is also the matter of tax benefits. The county has assessed the plant's 1,100-acre site at $113.7 million. Although the company wages an ongoing court battle to downsize that number, the site remains one of the 10 largest tax-paying facilities in the nation, Schneider says. The impact is enormous. Perry High School looks like a college campus. And since the plant's 800 workers all labor inside the limits of North Perry Village, income taxes have left the village in a state of perpetual windfall. Budget surpluses allow free trash pickup, sewer, water, and cable television for each of the village's 1,000 residents.

The extras give North Perry a certain cachet. "When we were moving, we knew we wanted to come to this area because of Perry High School," says Village Clerk/Treasurer Ellen Talbot. "But we also looked at North Perry especially, because of all the special services offered. It does cut down on monthly expenses."

Lightner agrees. "We didn't know they were going to do it when they built the plant," she says. "But it ends up being pretty nice."

Nuclear energy opponents suggest that the perks may be the equivalent of "buying off" the plant's trusting neighbors. "It's human nature," says Mentor resident Susan Hiatt, a member of Ohio Citizens for Responsible Energy and a longtime crusader against Perry. "People make a cost-benefit analysis and choose the benefits, especially when they can't see the costs. And radiation is definitely something people can't see."

Nuclear regulators say that no member of the American public has ever been injured through a plant accident. The wording is careful, and that's because several plant workers have died: three in a small plant near Idaho Falls, Idaho; four at the Surry Nuclear Power Plant near Norfolk, Virginia. But regulators say that even the Three Mile Island incident in 1979, in which a reactor came within 30 minutes of meltdown, was more public relations catastrophe than public health risk. A federal court ruled in 1996 that claims of illness resulting from the episode lacked supporting evidence. The plant's Pennsylvania neighbors aren't so sure. They tell stories of dying pets, burned skin, vomiting, and increased cancer fatalities. Some scientific studies have backed their case. Others have not.

Anti-nuke sentiment in the area was once a force to be reckoned with; other than mainstays like Hiatt, it has become almost nonexistent. "Anytime something happens at the plant, all the TV news stations come out here, and they talk to me," Schneider says. "And then they go out into the community and try to find a neighbor to bash us or try to find someone who's scared to death, and they can't do it. No one feels that way." The plant's mandatory public review meetings used to draw scores of activists. Today a crowd of one or two is more likely.

Although no new nuclear plants ordered since 1973 have been completed, the tide may be turning across the nation as well. Vice President Dick Cheney made headlines this spring when he suggested that nuclear energy again should be considered a viable option. An Associated Press poll in April announced that 50 percent of Americans agreed; 56 percent of those people said they wouldn't mind living in the neighborhood of a nuclear power plant. The Nuclear Energy Institute, a pro-nuke lobbying force, measures the nation's approval ratings for new plants at 66 percent -- 24 points higher than October 1999. Even Russia brought a new plant on-line in March, its first plant since Chernobyl. Nukes, it seems, are back.

Perry may be proof of that. The county's comprehensive plan predicts Perry Township will grow 47.2 percent by 2020. North Perry Village is expected to grow by 91 percent, says Lake County Planning Commission Director Darrell Webster. (Lake County communities outside the zone, like Eastlake and Willoughby Hills, are expected to lose population.) The trend is perhaps a greater testament to the power of sprawl than the twin cooling towers' beauty, but few officials believe the plant will stop the predicted influx. "If anything, it's a growth factor," Township Trustee Thomas Haas says.

Even as the siren sounds promptly at 11 this sunny July morning, construction workers are laying the foundation for a big new house on Antioch Road. Behind them, the massive cooling towers are clearly visible only a few blocks away. The steam rises to the heavens, billowing harmlessly over Lake County's endlessly optimistic kill zone.