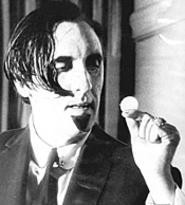 There are cult movies. Then there's The World's Greatest Sinner, a long-shelved 1962 oddity about a middle-aged insurance salesman who quits his job, changes his name to God, picks up a guitar, rocks the masses, and runs for President. It features his (implied) sex acts with a senior citizen and a 14-year-old girl, a score by a young Frank Zappa, and enough sacrilege to piss off even the most lax Christian.

It also includes clumsy pacing, stilted dialogue, and a ragtag shooting style -- all by writer, producer, director, and star Timothy Carey, a character actor whose résumé includes The Wild One, East of Eden, and Beach Blanket Bingo. His most famous role was that of a horse-murdering hit man in Stanley Kubrick's The Killing. He was hard to work with (he was fired from his first film, Billy Wilder's Ace in the Hole), was courted by Francis Ford Coppola for the first two Godfathers, and spent his last two decades -- he died in 1994 -- making movies that never made it to theaters.

"It's difficult to put this film in perspective," says Romeo Carey, the actor's son, who's bringing the only surviving print of The World's Greatest Sinner to the Cinematheque on Saturday. "People who saw it couldn't sleep at night, because their nerves were so frayed. I can't imagine what I would think if I was on the outside.

"My dad's films are pure Americana. He wanted to do his version of controversy. He wasn't a diabolical madman. He took a contrived idea of what controversy should be like in a film."

Sinner never received proper distribution (though it is a favorite among traders of bootlegged cult movies). Like many contemporary indie auteurs, Carey took parts in dreary movies and TV shows to fund his directing projects. "No one was giving him starring vehicles, so he had to create his own," says Romeo, who will discuss his father's work at the screening. "If you take everything else away, [Sinner] is really 80 minutes of Tim Carey. Is it him? Of course, it's him. How can you hide from that? But it's him doing this type of performance art that you don't know if it's real. That same presence he had on film, he had in real life.

"My dad did what he had to do to make [whatever film he was in] the best, and that pissed people off. Mostly because there was a creative misunderstanding. [People] thought he was being insubordinate."

The other films Carey directed were never released. His son says many remain in the vaults, and he hopes to issue them someday. But Sinner "is his Citizen Kane," says Romeo. Yeah, if Rosebud turned out to be a bleeding communion wafer and static cameras replaced Orson Welles' dynamic roving cinematography. "It's not meant to be absorbed all at once," admits Romeo. "It's an expression of true, pioneering, independent filmmaking, if only because of the force that put it together. It was all done single-handedly. It's the behemoth of all independent films in America."