This time, it's Robin Williams who twists the truth to make it more fun. 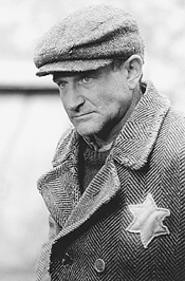 The joke that opens Jakob the Liar, the new Holocaust comedy (talk about an oxymoron) starring Robin Williams, captures the bittersweet quality — the grim reality mixed with laughter — that the rest of the movie tries and fails to embody.

The story takes place in an unidentified Jewish ghetto in Nazi-occupied Poland during the winter of 1944. A majority of the community has already vanished, sent to concentration camps from which they will never return. Those who remain in the ghetto are near despair; suicide is a common occurrence. One evening, Jakob Heym (Williams) is sent to the police commandant's office on a trumped-up charge of curfew violation. While there, he overhears a radio news broadcast that reports Soviet advances against the Germans. Excited as he is by the news, Jakob knows he cannot repeat what he has heard.

Jews are not allowed to own radios, and if he reveals he has survived a visit to the commandant's office, his friends will think he is an informant. The next morning, however, he promptly tells his friend, Mischa (Liev Schreiber), the good news. Afraid to admit how he got the information, he pretends that he has a radio. The rumor spreads quickly; soon, everyone is coming to Jakob, begging him for news from the Front. It's a dangerous situation: Being caught with a radio is punishable by death.

Jakob is keeping a second secret from his friends. Trying to slip back undetected from the commandant's office that first night, he encountered ten-year-old Lina (Hannah Taylor Gordon), who had just escaped from a train carrying her parents to the death camps. Reluctantly, Jakob agreed to hide her. If the Germans find out he is harboring the girl, they will kill them both.

There really isn't much story beyond this setup, and that's part of the film's problem: It's a very thin idea on which to hang a movie. Basically, people come to Jakob and ask him for news; he makes something up, and the ghetto residents analyze the news during their work breaks. On one occasion, Jakob acts out an elaborate BBC broadcast — complete with musical accompaniment — for Lina. The subplot with Lina is never developed, and a subplot involving Mischa and his girlfriend isn't terribly interesting.

The point of the movie, of course, is that Jakob's fictitious news reports serve to instill hope in people who have all but given up the will to live, lifting their spirits and providing a reason to carry on for another day. Humor is another big part of the film. Humor has always been a Jewish response to hardship, and according to the movie, the ghetto was no exception. But the supposedly funny quips and shrugs that fill Jakob the Liar are tepid at best and embarrassingly shticky at worst. Some are simply in bad taste, as when Mischa repeatedly bangs on his friends' doors and pretends to be the Gestapo. Williams spends an inordinate amount of time talking out loud or to a photo of his dead wife, presumably as a means of communicating information to the audience, but the tactic proves stilted and unconvincing. On the whole, the ghetto residents look and act like sweet, comic, even bumbling homeless men. Jaunty, circuslike music further encourages such an impression. The only actor to display any credibility or semblance of reality is Armin Mueller-Stahl, who brings a restrained dignity and compassion to his role as the ghetto's resident doctor.

It is no fun to criticize a picture that is so obviously a labor of love for its director. As a child in Hungary, Peter Kassovitz wore the yellow Star of David on his clothes. At the age of five, he watched as his parents were sent to a concentration camp (miraculously, they both survived). He himself was spared, thanks to the kindness of a Catholic family that hid him for the duration of the war.

In 1990, Kassovitz, who now lives in Paris, ran across the Polish novel Jakob the Liar, whose author, Jurek Becker, had spent his own youth in the Lodz ghetto and in concentration camps. The book had already been made into a German movie that had won the Silver Bear award at the 1974 Berlin Film Festival. Kassovitz wanted to bring the story to a wider audience and bought the rights for an English adaptation.

The film was shot at about the same time as Life Is Beautiful, but its release was delayed until now. Comparisons with that Italian hit are inevitable, given that both films deal with the Holocaust and center around characters who fabricate elaborate stories to disguise a horror too terrible to contemplate. But the two films are actually quite different, although neither appealed to this critic, for very different reasons.

Life Is Beautiful was intended as a fable, but the events that occurred inside the concentration camp — for example, the characters' freedom to walk around — strained believability. Such conceits didn't work even within the context of the make-believe world. And star Roberto Benigni is an acquired taste. His attempts to be endearing wear thin very quickly. There is an uncomfortable hint of vanity to his performances — including his "performance" at the Academy Awards ceremony — that proves consistently irritating. A similar problem sometimes mars Robin Williams's performances, although in Jakob the Liar, he has a lot of company in that regard, to the film's detriment.