Driver Side Impact Shifts Musical Gears For Its New Album 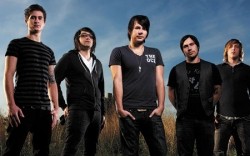 When the guys in Driver Side Impact started recording their new album, Lion, a few months ago, they forced themselves not to listen to any other music. They didn't want to be directly influenced by anything they were absorbing at the time of the recording.

"We wanted to have a complete open mind," says guitarist Mark Woodbridge, who's been with the group for a year.

While it's impossible to have a perfectly clean slate, the approach paid off. The album commences with "Walking on Water," a song with guitars that alternately chug along like hardcore and swirl with sonic intensity, and finds singer Branden Lanhals defiantly declaring, "You won't tear me down." The tune sounds a bit like a rowdier Foo Fighters number and even features some fine harmony vocals. Elsewhere, "Patience (Gave It Up)" has the get-up and go of a Jimmy Eat World tune, and songs about falling in and out of love ("The Day You Made the Sky Fall" and "Walking on Water," respectively) don't settle for clichés. The band even delivers a catchy instrumental ("The Ties That Bind and Break") that shows just how capable it is at creating ambient soundscapes.

"That song is kind of spacey, and it changes the mood of the record," says Woodbridge. "It could be something poppy or really dark. The name popped into my head. I searched it on Google, and it wasn't used for a song or album or band name, so I went with it."

The roots of Driver Side Impact go back to 2004, when guitarist Jack McGinty formed the band in Cleveland. It quickly self-released the ironically titled EP We Will Disappear and then signed with the locally based HM Management, which helped secure a deal with Chicago-based Victory Records, home to many of the country's up-and-coming emo and pop-punk bands. While the band's Victory debut, The Very Air We Breathe, drew comparisons to records by bands such as Bayside and Mayday Parade - acts with which it would tour - the group decided to go for something different with Lion.

"I came up in the studio when [Brandon] was tracking vocals, and he had a ton of vocals recorded and then scrapped them and went in a different direction," says Woodbridge. "The new record is a lot more structured and has more powerful choruses. It's a really, really good mature record for the band. It's more upbeat, and we're trying to make it more poppy. All the tempos are a lot faster than the last album. It sounds a lot better production-wise too."

Initially, when the group got its budget for the album from Victory, it considered hiring a producer from outside of town (Woodbridge says the guys were considering several candidates from New York). But because it liked the work that Don DeBiase did on its previous album so much, it decided to go with him again. After a slight delay, the album was finally recorded over the summer.

"It was crazy," says Woodbridge of the recording process. "The studio got robbed and literally everything got stolen. Don was producing us and out buying new gear at the same time. It was absolutely crazy. But Don is so great. He let us do what we wanted to do. He's awesome, and we love working with him. I'd love to do another record with him."

"We definitely feel like we have a solid lineup now," says Woodbridge. "I met the band last year and toured with them then. Their record had just come out, and I hadn't even heard of them. It's crazy that a year-and-a-half later, they already have the next record out. We want to make the next record even bigger and have already begun writing ideas for new songs. I joined the band because I didn't want to do what everyone was doing. We wanted to start trends and not follow them."