Angelina Jolie's quest for redemption yields a lackluster Groundhog Day or something like it. 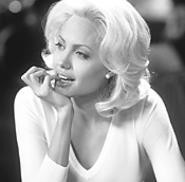 The thoroughly unlikable heroine of Life or Something Like It is a vain, actressy bleached blonde in the employ of a Seattle TV station. To call her a "reporter" is to defame reporters. Her hairspray outweighs her brain, and everything in her life -- from her obsessive workouts at the health club to her tube-friendly wardrobe to her half-hearted romance with a famous baseball player -- is calculated to further her ambitions. To wit: This ruthless social climber means to move up from Seattle's inane morning news-and-talk show to a major network's inane morning news-and-talk show.

But before Lanie Kerrigan, whose very name is synthetic, can become a national celebrity, the makers of this hit-and-miss comedy about striving and satisfaction throw her a typical Hollywood curveball. Take a guess. That's right, you smartypants! Between powdering her nose and tracking down a crucial holiday story on pumpkins that look like famous people, Lanie runs into a ragged street-corner prophet (Tony Shalhoub) who tells her she's gonna die. On Thursday.

After confirming the accuracy of the crazy shouter's other predictions (sure enough: Seahawks 19, Broncos 13; and, oh yeah, come morning, it hails), our Lanie decides to examine her life and reassess her values. We can hardly wait for the reemergence of the real Lanie Kerrigan -- the one who loves her family more than her job, who can fall for a real guy instead of an image-enhancer, who rediscovers the heart that still beats true deep in her (surgically augmented?) breast. Before these two hours are up, we're all gonna go gaga for Ms. Natural.

Except that those people who keep telling us that irony is dead are dead wrong -- at least for the moment. Life or Something Like It, which could easily be retitled Redemption or Something Unlike It, comes with two giant-size scoops of irony, both of them unintended (which, if you think about it, makes them all the more ironic). First, the leading lady here is Angelina Jolie, the lippy one last seen in the execrable Lara Croft: Tomb Raider. As an actress, she's three times more vain and actressy than Lanie Kerrigan could ever dream of being and, therefore, a most unlikely candidate for redemption. Second, the movie's writers (John Scott Shepherd and Dana Stevens) and its director, Stephen Herek (Mr. Holland's Opus, Rock Star), have told a cautionary tale about the folly of superficiality that is itself endlessly superficial. Say what you want about Hollywood losing its way in recent years, there's something beautiful about moviemakers who paint themselves into corners this tight.

The best thing about Life -- although it comes and goes -- is its dead-on satire of TV-world idiocy. Like Faye Dunaway's driven executive in Network or the spray-painted airhead on your local newscast, Lanie Kerrigan is the boob-tube incarnate -- shallow, self-absorbed, mercenary -- and the moviemakers savage her and her scene with unmitigated glee. Co-writer Shepherd is a reformed copywriter who used to pen TV spots for hamburger chains and airlines, and that evidently sharpened his aim. Everything from Lanie's preening stand-ups to the crackpot ideas of her assignment editor speaks of TV's obsession with appearances and equipment. The only whole-earth, real-life, natural-fabric thing on the set turns out to be good ol' Pete, the grubby, wisecracking cameraman (Saving Private Ryan's Edward Burns) Lanie will eventually fall in love with.

It's too bad, then, that Lanie's conversion scene is such a phony piece of dreck. As the movie would have it, the doomed heroine stays up all night drinking vodka, once she knows nothing matters anymore, then stumbles off to an assignment where she lets down her guard by leading a group of striking transit workers in an on-camera version of "(I Can't Get No) Satisfaction." This cheap theatricality not only captivates her bosses at the station, it inexplicably snows Pete the cameraman, a no-nonsense guy if there ever was one. The network guys also see her performance, and even though she's supposed to die that day, Lanie immediately jumps on an airplane for New York.

Need we tell more about Lanie Kerrigan's redemption? Probably not. Suffice to say she's a lot less fun to be around than the last obnoxious TV jerk to be reinvented via semisupernatural means -- Bill Murray in Groundhog Day.