Her neck injury healed, a WWE star returns to the ring. 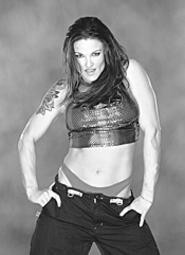 Lita wants to dismiss all the gossip about her future with WWE Raw. "It was never a matter of if I would return," she says. "It was a matter of when."

It didn't seem that way in April 2002, when a stunt man on the set of Dark Angel accidentally dropped the 28-year-old WWE superstar on a crash pad, breaking her neck. Able to wiggle only her fingers and toes, she was forced to wear a neck brace and lie motionless for four months. "Staying still was my only rehab," she says.

To fill time, Lita (a.k.a. Amy Dumas) co-wrote Lita: A Less Traveled R.O.A.D. -- The Reality of Amy Dumas. "I didn't go intentionally for a motivational story, but if you can draw from it and relate to it for your own life, great," says Lita, who signs her book at 4 p.m. Tuesday at Borders in Westlake.

Fit to Be Teed
Winter's no excuse to shelve your golf game.

Golf has many alluring aspects, but winter play is not among them. Once the snow hits, you can haul your Pings out to Fairways, an indoor facility that offers all the challenges of Pebble Beach, Doral, St. Andrews, and even Hawaii's Mauna Lani course. Simply launch your ball into the projected image of each hole; you are then advanced down the fairway with every shot, according to the direction and force of your efforts. Once on the green, you putt to an actual hole in front of the screen. Best of all, if you rack up a snowman on a tough par 3, you can bathe your frustrations in a Johnny Walker from the bar, conveniently located a few steps away. Fairways (8003 Mayfield Road in Chester Township) is open from 8 a.m. to midnight Monday through Thursday, 8 a.m. to 1 a.m. Friday, 6:30 a.m. to 1 a.m. Saturday, and 6:30 a.m. to midnight Sunday. It costs $25 to $30 per hour to play. Call 440-729-7878 for more information. -- Christine Howey

Got Cavs?
There's plenty of good seats near the action.

Flannery's Pub is set to offer 18-year-old LeBron James his first Guinness. Think of it as a thank-you gift. "[Business] has been a lot slower this year," says Sean O'Donnell of Flannery's, which sits a block north of Gund Arena. "But we're now looking at 41 huge nights because of the Cavs." Since it's all but impossible to snag tickets to Wednesday's home opener against the Denver Nuggets, Flannery's -- along with more than 10 other bars within two blocks of the Gund -- celebrates James's pro debut with a variety of drink and food specials, live music, and, of course, the game (which starts at 8 p.m.) on the big screen. Flannery's Pub is at 323 Prospect Avenue; call 216-781-7782. -- Steve Albanese

The country's best martial arts students grapple for trophies at this weekend's United States Belt Championships. Included is a seminar on san-ryu-do, a type of swordplay that combines physical and mental strength. "There is power in holding a sword that allows walls to crumble and barriers to break," offers participant Brett Adamik. The championships start at 9:30 a.m. Friday and Saturday at the Holiday Inn Crown Plaza, 135 South Broadway Avenue in Akron. Admission is $5 to $8; call 330-253-5970. -- Cris Glaser