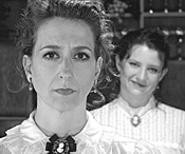 Every year, Charenton Theatre comes up with a unique production or two in its brief season. This time around, it's a perfectly symmetrical set of two one-acts: Each less than half an hour, each featuring four actors (male in one, female in the other), and each casting a satirical eye on women of a certain social class. Dubbed the "Inside/Out Tour," these theatrical miniatures, presented free over the next two weekends, are a delightful and refreshing way to top off a light summer dinner.

The first play is George S. Kaufman's glorified and entirely self-explanatory vaudeville skit, If Men Played Cards as Women Do. Back in 1923, when Kaufman noodled this brief lark, it wasn't acknowledged that men were as catty, gossipy, and petty as women were reputed to be. Ah, how times have changed. Now, we have leaders of the U.S. executive branch giggling like snippy little seventh-graders about a disliked reporter, within range of a microphone, no less (George W. Bush: "He's a major-league asshole." Dick Cheney: "Yeah, big time."). And don't forget the brawny athletes telling stories about injecting steroids into the buttocks of their teammates. George S., please stop spinning.

In this tiny drama, four men have gathered to play cards, but all their dialogue has been written from what Kaufman (author of the still hilarious The Man Who Came to Dinner and You Can't Take It With You) perceived as the perspective of genteel ladies who know a lot more about dealing rumors than playing poker. One fellow asks what values the chips have, and all the blokes stare blankly at each other, until one suggests they make them all worth a penny each -- an idea that is greeted with much appreciation and relief. In the middle of another hand, another gentleman comments that he'd just love to see the host's kitchen.

Given our familiarity with gross gender behavior onstage, it's important that the players, under the direction of Jacqi Loewy, maintain their masculine presence -- although host John is played by Andrew Narten with quite a fey arched eyebrow. If they come across as Nancy boys, the joke is cooked, and all the feminine references ("That hat does make your face look thinner") would take on a different meaning. John Busser, Doug Kusak, and Frank Wilson play it all with straight faces, in both meanings of that word.

At the time he wrote it, the playwright no doubt thought that he was penning a gender-bending episode for the ages -- and that he couldn't sustain the joke any longer for fear his actors would collapse in a welter of hearty alpha-male guffaws. Men acting like women -- the very idea! Well, it's too bad Kaufman didn't extend the fragile conceit a bit further, for one's appetite is only whetted before the players learn about a surprising pregnancy and fling their cards into the air, declaring their pleasant masquerade over.

In the other offering, Overtures, by Alice Gerstenberg, two women are meeting for tea and cakes. Their conversation proceeds conventionally, except that, lurking nearby, is each woman's inner self -- a younger, feistier, and more primitive alter ego that keeps saying what the woman really feels, in counterpoint to the polite palaver being exchanged between the two real ladies. Harriett's Hetty and Margaret's Maggie, the id-driven provokers played respectively by Maggie Arndt and Amy Pawlukiewicz, are blunt ("I could bite you!" "She's freckle-faced and gawky!") as they stage-manage the tête-à-tête.

It turns out that Harriett (Mary Alice Beck) always had a thing for Margaret's husband, John, a struggling portrait painter. But Margaret (Dawn Youngs) keeps John's failings under wraps as she tries to wangle a commission from the well-to-do Harriett. Gerstenberg's witty dialogue (she was a contemporary of Kaufman) -- with the inner selves jockeying their corporeal manifestations into better psychic and monetary bargaining positions -- is entirely satisfying, in light of the truncated nature of the play itself. By embodying the new (at that time) Freudian theories about the unconscious mind, the playwright turned obscure psychological insights into delicious fun.

Director Mindy Childress keeps the four women -- all dressed nearly identically in high-necked blouses and long skirts -- clucking along smoothly as they finally manage to set a date to meet for a portrait sitting. And the last two lines, delivered by ego-woman and id-woman, respectively, say it all: "It's been lovely." "I hate you!"

It's a reflection of Charenton's mission to deliver involving theatrical fare, in unusual and frequently open-air venues. So if you know someone who doesn't go to theater very often, this would be an ideal way to break the ice. It's fast, it's free, and it's a damn fine time.