The Wicked Witch gets a makeover in Playhouse Square's return to Oz. 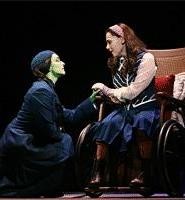 Sure, it's possible to reimagine well-known villains: Perhaps Hannibal Lecter was just a misunderstood gourmand, or Cruella De Vil the hapless victim of a naming process beyond her control.

But the Wicked Witch of the West? Can we revamp our perception of the malevolent, broom-propelled crone who was made indelible forever by Margaret Hamilton in the 1939 film The Wizard of Oz? That's the delicious conceit at the heart of Wicked, the intriguing Broadway musical that is now drawing crowds to the State Theatre. The ambitious theme ignites a lot of laughter and some genuine sparks of emotion and romance, in spite of a few overproduced songs and a multilayered set that's dense with distractions.

The show begins with the death of the Wicked Witch, but then jumps back in time to the Land of Oz, where a proud but troubled couple welcomes into the world that very same witch -- a baby that emerges the color of lima beans. The girl, named Elphaba, grows up strong and smart and possessing certain paranormal powers. But since she never loses her verdant skin hue, Elphaba has a hard time attracting friends or color-coordinating her wardrobe. Meanwhile, the Good Witch, Glinda, travels around in a bubble -- in more ways than one. Blond and vain, Glinda is as shallow and superficial as Elphaba is compassionate and contemplative. How's that for flipping your preconceptions?

Based on the novel by Gregory Maguire, Wicked's music and lyrics (Stephen Schwartz) and book (Winnie Holzman) follow these two witches as they room together, involuntarily, at a Hogwarts-style school. Though many of Schwartz's lyrics are buried under a mudslide of elaborate orchestration, his wit continually shines through. In the tune "Popular," Glinda tries to tutor Elphaba in the social graces, saying: "Don't be offended by my frank analysis/Think of it as personality dialysis."

There are actually two parallel tracks to the story line. In one, the Land of Oz is experiencing a crisis, as the animals -- formerly imbued with the power of intellectual thought and speech -- are gradually becoming nonverbal. Is there a conspiracy afoot, led by the mysterious Wizard? The other track is an exploration of the competition/friendship between the two witches and the growth of Elphaba into Oz's version of a PETA activist, trying to rescue the animals from their regression to braying and grunting creatures. Her act-one finale, as she fully embraces who she is, makes "Defying Gravity" a nerve-tingling showstopper.

Clearly, there are 21st-century political overtones here, as a government tries to limit thought and speech. The Wizard spells this out in "Wonderful," when he explains that political success is about branding ideas: "Is one a crusader or ruthless invader?/It's all in which label is able to persist/There are precious few at ease/With moral ambiguities/So we act as though they don't exist." That's another character flip, as the Wizard has morphed from harmless coot to scheming manipulator.

Even though Wicked is stuffed with ideas, it's the effusive performances that keep the show airborne. As Elphaba, Julia Murney has the requisite sharp features and slim figure of the Wicked Witch of our memory. But she radiates humanity through her Kermitlike facade and gives passionate voice to her songs. In particular, her reflective ballad "I'm Not That Girl" is quite touching when she observes: "Every so often we long to steal/To the land of what might have been/But that doesn't soften the ache we feel/When reality sets back in."

Most of the comedy chores are handled by Kendra Kassebaum, who literally vibrates with self-adoration as Glinda (it's actually Galinda, and the name change itself gives rise to another amusing mini-narrative). Afflicted with terminal perkiness and an inability to perceive substantive issues, Kassebaum's Glinda is a diamond-studded ditz who still has her basic priorities straight -- which leads to a surprising finale everyone can embrace.

Since the story is told from Elphaba's point of view, Dorothy is reduced to a "farm girl" interloper with "her little dog Dodo." And her three companions on the Yellow Brick Road have an entirely different and fascinating genesis -- one that is grounded in the life of Oz, not Kansas.

The complex, clockwork set design by Eugene Lee is magnificent in dimension and detail, with a mechanical dragon on top of the proscenium arch and gear wheels attached to virtually every vertical surface. Perhaps symbolizing the gears that inexorably grind out our personal fates, the set is at once astounding and almost too diverting.

But director Joe Mantello keeps the focus on this ever-so-human pair of witches and manages to put a sympathetic face on the arch boogy-woman of our childhood nightmares. Who'da thunk?