Yoshitomo Nara's toddler-punks share the darker side of childhood. 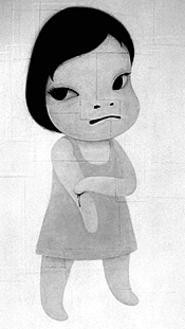 Yoshitomo Nara is a hot Japanese import. There's a boyish charm about the 43-year-old artist, but it's his depictions of moody kids and their dogs that wealthy collectors and teenagers find irresistible. A pop-culture icon in his native land, Nara hit U.S. shores in the late '90s, as part of the Japanimation tsunami that brought Pokémon and Hello Kitty.

As a purveyor of original work and mass-produced product, Nara keenly straddles high and low art. His cast of characters has universal appeal, and his works are available in every price range. He's beloved by Green Day's Billie Joe Armstrong and literary it-boy Dave Eggers. Collectors spend thousands on his original paintings, and adolescents snag bookends and postcard collections from online art stores. Everyone, it seems, can afford a piece of Nara.

Much of the man's unspoken-for original artwork is parked for the next three months at the Museum of Contemporary Art. Nothing Ever Happens, Nara's first traveling U.S. solo show, offers a bewitching sampler of his cute but demonic kids and their equally bipolar animal friends. The nearly 150 works include paintings, sculptural objects, and drawings; all were created in the past four years, and some are hot off the press.

Visitors are welcomed with "Knife Behind Back," an enormous painting of a kid with angry eyes and hand hidden behind the back of her red tunic, portending the rampant deception that awaits inside the exhibition. Like all of Nara's painted figures, the child inhabits an empty monochrome space, forcing the viewer to focus on mood -- the true subject of all his work. The painting's deceptively quiet, gentle formal qualities -- its perfectly crafted matte surface, subdued palette, and solid, static figure -- sharply contrast with its dark and volatile psychological narrative. In fact, much of Nara's work thrives on the tension created by trying to camouflage roiling emotion in calm veneer. Nearby, the snarling child in "Sprout the Ambassador" (another large painting), whose eyes monitor the space behind her back, taunts with a tiny green plant sprout she offers in an outstretched hand. She's luring us into Naraland, where kids look with scorn and mistrust on the oppressive adult world.

So the kids aren't all right, mentally or physically. They have unnaturally wide almond-shaped eyes, swollen foreheads (think Snoopy and Charlie Brown), bobbed hair with short bangs, red slits for mouths, two pinprick holes for a nose, and rag-doll limbs, minus toes and fingers. In each picture, Nara manipulates this basic anatomical vocabulary to create a specific mood portrait of childhood. At first glance, some seem sweet as cherubs. Maybe it's their soft, cream-colored skin and their clothes in muted mints, pinks, and yellows. Spend a little time with them, though, and you realize they're all insolent, irreverent, miffed, or scheming. (Their gender's just as ambiguous: Though Western critics interpret the kids to be girls, the Japanese dress girl and boy toddlers in the same tunic-like outfits -- to Nara, they're all likely just symbols for children.)

The crayon drawing "In the White Room" (2003) features a long-haired moppet suffused in a sickly yellow-green light. With one eye open and the other at half-mast, the kid appears to have just sucked on a lemon. Her contorted, oversized face is smack at the front of the picture plane, confronting the viewer with her discomfort; she's either gonna reach through and strangle somebody or crumple into a corner, defeated by loneliness. Or is it ennui? Maybe she's Generation Y's version of "The Scream." The beauty of Nara's work is that the viewer completes the narrative. It's no surprise that one of his favorite books is Lewis Carroll's Through the Looking Glass; perhaps his works are mirrors through which we see ourselves.

The show gets curiouser and curiouser with Nara's series of giant "dish paintings": acrylic on cotton, mounted on 70-inch-diameter plastic forms. With eyes closed and a sweet smile, "Little Thinker" looks like an obedient child with a bowl haircut. But a bandage on her forehead suggests previous mischief. In "Slight Fever," an unhappy child, eyes rolled to the left, presses her hand on a bleeding arm. She's plotting revenge. (Perhaps that explains "Little Thinker"'s headwound.) The cranky youngster in "Too Young to Die" defiantly puffs on a cigarette. Could she speak, her voice would be the gravelly baritone of a lifelong smoker.

Recent exhibitions, such as last year's My Reality at the Akron Art Museum and 2001's globe-trotting Superflat, pigeonholed Nara as an anime artist. By removing his work from the Japanimation context, Nothing Ever Happens curator Kristin Chambers lets the viewer discover Nara's myriad additional influences, from Renaissance painting to pop music, literature, and film.

The muted palette of Nara's paintings and the classical three-quarter poses of his figures stand in stark contrast to typical slick, color-saturated anime. Nara's pale colors echo the limited palette in the fresco paintings of Giotto, the 14th-century Italian whom Nara admired while studying art in Germany. The skin tones of Nara kids are reminiscent of the creamy complexions in 15th-century Renaissance portraits of women.

But if Nara's paintings are tightly, almost classically composed, his drawings are carefree and mouthy, ranging from doodles on envelopes and hotel letterhead to more elaborate sketches on notebook paper. A handful of the mostly untitled works are framed, but most are affixed to the gallery walls with masking tape. Unlike the paintings, many contain scrawled messages. The Nara kids, here teenagers, yell "Fuck!" and slam their fists. A cranky face mimics the flight-attendant mantra "Clear for landing! Please place your tray tables and seat backs in their upright position and prepare for landing!" The drawings, Nara says, function like a kind of diary and arise without thought whenever an idea strikes him. One is a sketch of the rhino-sized sculpture "Dog From Your Childhood," which was displayed in a New York City park last summer and is now part of Nothing Ever Happens. Another resembles a blond Madonna in her cowgirl phase.

Nara's sculptures reveal that he's at his best as a painter and draftsman. "Light My Fire," a six-foot-tall painted wooden sculpture of a kid holding a ball of fire, captures the snotty impertinence of youth. Is she a Doors fan who demands to be entertained? The five-year-old with supernatural powers in Stephen King's Firestarter? Despite its rich narrative, the sculpture lacks the tension between light, masterfully crafted surfaces and dark psychological content so prevalent in Nara's paintings and drawings. Cracks emerging in the painted surface and around stress points (like the head and legs) betray his struggle to master a new medium.

It might appear that nothing ever happens in Naraland, where kids and puppies inhabit an empty, isolated, dream-like space. But look beneath the surface -- into their eyes and their subtle gestures -- and you'll find a universe of turbulent emotion. Nara captures for us the psychological landscape of childhood, and like any great explorer, he deserves to be heralded as a visionary.