The library celebrates all things Latino. 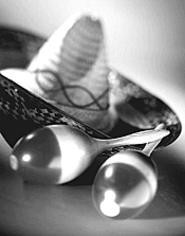 When Carmelita Peñana migrated from Mexico to Cleveland two decades ago, she promised herself that she would teach her homeland's traditions to her children. Now teenagers, her three daughters will get a refresher course at La Gran Fiesta. "I don't want my kids to forget their ancestry," says Peñana. "I pray they'll tell stories about their heritage to their children someday."

The party marks the start of Hispanic Heritage Month in the Cleveland Public Library system. Throughout the evening, there will be performances by Sammy de Leon y Su Orquesta, Saint Michael Church's children's choir, and the Grupo Isla Dancers. A three-week series of dance programs, drumming workshops, and Hispanic-literature readings follows, with writer Luis Rodriguez capping off the celebration with a 2 p.m. lecture on October 9 at the library's downtown branch. He'll share his past as a teenage gang lord. "He has a heart-wrenching message that says you gotta do the right things in life," says Milos Markovic, a foreign-literature librarian. The Fiesta runs from 5 to 8 p.m. at Cleveland Public Library's Carnegie West Branch, 1900 Fulton Road. Admission is free. Call 216-623-2822 for a schedule.. -- Cris Glaser

Who You Gonna Call?
A genuine ghostbuster knows where the bodies are.

"Ghosts can't hurt you," assures Sonya Horstman, host of Haunted Cleveland Tours. "There's a cosmic law. Otherwise, we'd all be possessed." With that in mind, we're all set to follow Horstman -- known in paranormal circles as Psychic Sonya -- on her trip to some of the area's scariest places. Among the stops is the Agora, where the spirits of long-gone metal bands and a mysterious "man in the yellow raincoat" lurk. "He has a habit of tying and untying stuff," says Horstman, a self-proclaimed ghostbuster and paranormal investigator. Horstman claims to have rid the concert venue of all its other ghosts, "but he persists," she says. "He's real mischievous." We also hear he makes a pretty good fish stick. Tours start at 6:30 p.m. Thursday and Friday through November 25 at Grays Armory, 1234 Bolivar Road. Tickets are $45; call 440-775-1217. -- Chris Miller

Back in the day, Greta Garbo famously declared, "I want to be alone." But that won't be easy, once movie fans get their hands on the just-released Garbo: The Signature Collection, a 10-DVD set featuring some of Hollywood's greatest golden-age achievements. Among them: Ninotchka, Queen Christina, Anna Christie, and Garbo's best movie, Grand Hotel. No matter that she basically played the same stoic, elusive superwoman in most of her films; the actress -- who called it quits at age 36 -- oozed star power, as this gorgeous, essential collection makes clear. Also included are three of Garbo's silent flicks and an informative documentary about the reclusive Swede, who puts today's publicity-chasing ingénues to shame with her style and grace. -- Michael Gallucci

Take It to the Bridge

We take our art wherever we can get it. And if that means sneaking a peek at some local craftsmen's work on a bridge at Saturday's appropriately titled Art on the Bridge, so be it. The fourth annual gathering features food, live music, and work by more than 25 artists, all under the Harding Covered Bridge (on Route 252, north of Bagley Road in Olmsted Falls) from 10 a.m. to 5 p.m. Admission is free; call 440-623-7774. -- Michael Gallucci