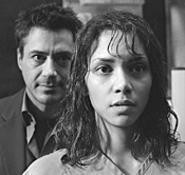 It took them four years, but finally Dark Castle -- Robert Zemeckis and Joel Silver's horror division, which puts out a movie a year around Halloween -- have made something that's genuinely scary. It may be no coincidence that this time around, Silver has scored a higher profile cast than usual and a better-known director in part-time actor Mathieu Kassovitz (The Crimson Rivers). Maybe all that Matrix cash gave Joel deeper pockets. Or maybe, after the success of The Ring, he realized that one long-haired, soaking-wet little girl is scarier than a whole posse of latex-enhanced "rubberheads" (as a colleague charmingly calls them).

But don't be too impressed just yet: Gothika may be more psychological a suspense flick than Ghost Ship, but that doesn't mean it's entirely subtle. The movie opens, for instance, with Penelope Cruz directly addressing the camera to describe coitus with Satan. Later, because it worked so well in the Matrix movies, Silver has a fat, shaven-headed black man (Charles S. Dutton this time) set the tone with a bunch of portentous dialogue about individual realities and god analogies. And there's still an obligatory nude scene, though since stars Halle Berry and Penelope have already done their time in the trenches on that score, we get a bunch of ugly and insane chicks in a big group shower scene -- presumably, that hits someone's fetish somewhere.

Anyhow, Halle Berry is "a brilliant and respected criminal psychologist" named Dr. Miranda Grey -- which is ironic, because she tends to view the world in black and white, ya dig? She's as rational as Mr. Spock and, uncharacteristically for Berry, generates about as much heat with onscreen hubby Dutton as a Vulcan would, which is to say none. Meanwhile, coworker Pete Graham (Robert Downey Jr., doing a shticky, exaggerated impersonation of himself) has the hots for her, which is only natural, since she's the only female in the vicinity of Woodward Penitentiary (their place of employment, labeled several times as such onscreen, as if the name will pay off, which it doesn't) who's not insane.

On a dark and stormy night (Lord knows, there's no other kind) Dr. Grey is on her way home, when she sees a creepy little girl (terrifying newcomer Kathleen Mackey) standing in the middle of the road. The doctor swerves, crashes, and runs out to help the girl, who promptly bursts into flames and grabs Grey by the hair. Fade to black. Next thing we know, Dr. Grey wakes up as a patient in her own institution, accused of a crime she has no memory of committing. As you've undoubtedly seen in the trailer, a line uttered by patient Cruz comes back to haunt the doctor: "You can't trust someone who thinks you're crazy."

But did Dr. Grey actually commit the crime? If she did, then why? And why does the creepy girl keep coming back to kick her ass, mentally and literally, on a semi-regular basis, invisible to all but Grey?

One possible explanation is that none of what we're seeing is real, and, given the way the place operates, that wouldn't be too surprising an option. Grey is treated by Pete, the coworker who tried to initiate an affair with her previously. The sheriff investigating the murder is the best friend of the victim. Conflicts of interest, anyone? And about that group-shower scene -- is there a worse idea than gathering a large group of criminally insane women in one big room with minimal security? Security in general is peculiarly bad at Woodward Penitentiary -- Grey seems to be able to escape her cell whenever she feels like it, and let's be realistic, folks: If a security guard can't handle Halle Berry, we've got a problem.

Then again, real-life penitentiaries aren't stalked by vicious dead girls, so maybe that whole realism thing is overrated. What matters is that Gothika delivers genuine scares. Mackey's malevolent spirit is as freaky to look at as the possessed Linda Blair was back in the '70s, and director Kassovitz gets a lot of mileage from shots that hold back on the horror until the very last minute, milking every moment. And unlike, say, The Others, in which the "ghosts" ultimately weren't so scary when revealed, Gothika does show you gore. It just doesn't go overboard with it into the realm of self-parody, as the other Dark Castle films have done. Perhaps the most gruesome moment of the film appears to have been added to cover for the arm injury Halle Berry sustained on the set, but it works into the narrative just fine.

It's too bad that the climax jettisons most of the supernatural elements in favor of a real-world threat, because frankly, said threat comes off as a little silly. Silver's not out to win Oscars, though, but to shock, and on that level, he's scored.