Can restaurants with big menus deliver big flavors too? 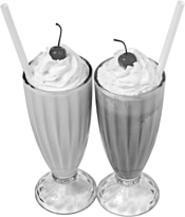 The better the restaurant, the smaller the menu: As generalizations go, this one isn't too far off the mark. At one end of the continuum, gourmets can point toward those few and fabulous fine-dining temples lorded over by culinary high priests, where nothing is served save free-range quail cheeks scattered on a bed of organic arugula, harvested beneath a full moon on the fourth night of Festivus. And on the other end? Maybe we'll call them "Kitchens for the Common Man," those that offer something for everyone, but do nothing exceedingly well.

We got to thinking about this during our visits to Chris & Jimmy's Diners, a duo of vintage diners in Cleveland Heights, connected by way of a shared lobby. The laid-back eatery (formerly Dottie's Diner) reopened in December under the ownership of Chris and Jim Tsilianidis, brothers who grew up in the local restaurant industry. Now cheerfully done up with 1950s-era photos of movie stars and sports champs, the blue-and-silver 1949 Jerry O'Mahony (Chris' Diner) and the 1952 red-and-silver Mountain View (Jimmy's Diner) add the bittersweet scent of nostalgia to a casual meal while slipping a handsome slice of history into the neighborhood.

Chris (a theater major and former PR guy for Paramount Pictures) and Jimmy (most recently a Toyota-dealership sales manager) hired Michael Muhic, a Culinary Institute of America grad and veteran of some of the city's more notable dining rooms, to run the kitchen. Together with input from Papa Tsilianidis, the three have developed a whopper of a menu -- four menus, to be precise, including separate tomes for breakfast, lunch/dinner, daily specials, and desserts.

It doesn't take a flow chart to see that trying to execute all this in one operation must be staggering. How do you manage such a huge (and perishable) inventory? How do you find space to accommodate the necessary equipment and staff? And most important, how do you ensure that everything is done right and tastes good?

Danny Meyer (super-successful Big Apple restaurateur and recent Beard Award winner) probably knows the answers to all those questions. Not surprisingly, though, the Tsilianidis brothers and Chef Muhic still seem to be working them out: While nothing (well, almost nothing) coming out of the kitchen was terrible during our three visits, not much made the pinwheel on our beanie spin either.

The low point probably arrived with a breakfast of homemade corned-beef hash, served with eggs, home fries, and toast and jelly. We have some pretty rigid notions about what makes for good corned-beef hash. At the bare minimum, it should be nearly greaseless, cooked long enough to develop bits of savory crust, and contain at least as much lean, salty meat as crisp-edged potatoes. By those measures, the C&J version -- Chapstick-greasy, dominated by loads of paper-thin yet undercooked spud slices, and garnished with a scant sprinkle of pale meat crumbs -- made a poor showing. While the eggs -- fried, over medium -- tasted sunny and bright, the big buttermilk pancake that we ordered in lieu of the toast might have doubled as a Frisbee, and the side of thinly sliced home fries seemed not so much "fried" as simmered in Wesson oil. The coup de grace? The unappealing slice of desiccated orange that languished on the plate as a garnish.

Soup, too, can be a sturdy yardstick by which to take the measure of a kitchen's mettle: If it's not at least as good as Mom's, the entire operation falls immediately under a cloud of gustatory suspicion. On this score, the report on Chris & Jimmy's is a bit more upbeat. The good news arrived in the guise of mildly seasoned lentil soup, displaying just the right balance of homey, slow-cooked comfort and quality. The not-so-good news? The kitchen's version of New England clam chowder, which was presented not as a milky broth but as a shiny, gravy-like liquid, supporting lots of sliced celery, a few large dices of carrot, a hunk of potato, and some tiny specks of unidentifiable meat. If we hadn't known better, we would have guessed we were slurping up a pretty good version of cream of chicken-vegetable soup. But as New England clam chowder? It wasn't so great.

And so the parade of ho-hum food marched on. Perhaps a bit dry and maybe a little too heavy on the nutmeg, a big brick of pastitsio proved filling and substantial, if mainly unremarkable. The same can be said of thick slices of gravy-draped meatloaf: Better than some, not as good as others, they were definitely middle of the pack. Happily, an open-faced turkey sandwich was a little more distinguished, elevated by its hefty slabs of moist and tender breast meat, obviously carved from a real roasted bird.

Most dinner entrées include soup or salad and a choice of side dishes. One night's side salad, a crisp toss of romaine, cherry tomatoes, cucumbers, green pepper, sweet onion, and shredded cheeses, tasted fresh and satisfying; and a big, buttery mound of mashed potatoes was so good, it set us to jostling with a dining buddy over the last few bites. On the other hand, a bitter bouquet of overcooked broccoli looked terminally ill: faded from emerald green to a lifeless gray and ready to disintegrate into mush with a touch of the fork.

Back in its Dottie days, the diner had a rep for slow, inattentive, and sometimes even resentful service. Happily, the new management seems to have put that issue to rest. Other than a longer-than-expected lag between the arrival of our coffee and Minute Maid OJ and the moment our hash was settled on the table before us, pacing was prompt, and service was friendly and efficient.

The lengthy dessert menu offers pies, cakes, rice pudding, Jell-O, baklava, and the usual fountain treats. Our advice is to stick to the ice cream. A slab of multilayered "24-Carrot Cake" looked impressive, but proved to be a little past its prime. And a big slice of blueberry pie lost points for a soggy crust, although the berry filling tasted more wholesome than most. But the chocolate malted milkshake? Super-duper -- not too thick, not too thin, and with just the right balance of flavorings -- and so generously sized that we filled our old-fashioned fountain glass two more times from the frosty metal mixing can.

Probably, there are other hidden gems on the menu that are equally delicious; chances are, though, that no single diner will ever have the motivation or the appetite to discover them. That's why we would love to see management prune the kitchen's output, scrapping the more problematic dishes and allowing the culinary staff to focus its energies on a smaller number of noshes -- and to make each one of them taste great.

Too many cooks spoil the broth, they say. But too many options? That can spoil the whole meal.