Keith Isley's always clowning around on the job. 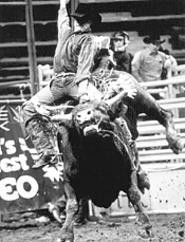 "You don't ever think about the danger. Whenever you do, it's time to get out," says rodeo clown Keith Isley. He's talking about facing down a 1,800-pound bull, something he's done almost nightly for 30 years.

"Their horns scare me, but their feet terrify me. If you get hit with a horn, it's gonna hurt. No doubt. But if you have something that weighs that much stepping on you, something's gonna give. And most of the time, it's something of yours."

While Isley can't claim, by his definition, "any major injuries -- just some broken bones, concussions, and teeth broken out," he's seen guys paralyzed and killed in the arena. "There's always the chance of something happening," he says. "But once you start dwelling on it, it's time to move on to something else."

Isley has thought about doing something else "for no more than 15 minutes." He started as a bull rider at the age of 15. But since there's no surefire paycheck involved -- rodeo contestants not only pay their own expenses; they also must pay an entry fee -- he became a bullfighter, "protecting cowboys" with only a barrel between him and a charging bull. "When I first started, I didn't have a clue what I was doing," he says. "I was more or less in the way. But that guaranteed check made it nice.

"I figured, by the time I was 30, this would be out of my system, and I would get a real job," says the 44-year-old. "Then it was 35. It just keeps going for me." Most riders are out of the game by 40, but Isley is in a position that can keep him busy for several more years. "The older you get, the slower you get," he says. "So I'm trying to put the bullfighting on the back burner, way on the back burner, and focus on the comedy."

So every night, he puts on clown makeup, takes his position behind a barrel, and waits for a ton of four-legged muscle to look his way. He speaks in platitudes when explaining the rodeo's lifelong draw: "It's been good to me," "It takes a special kind of person," etc. But ultimately, it's the adrenaline rush that keeps him coming back night after night.

"I like the abuse of the highway, I reckon," he laughs. "Once you step in the arena, you don't think of not doing this. I wish everybody had the opportunity to get on a bull, put their hand on a rope, nod their head, and get that feeling when the gate is opened, trying to ride an 1,800-pound farm animal." Um, thanks, but no thanks.