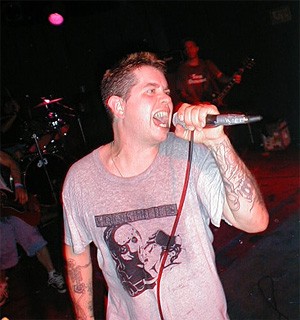 Most of Face Value's classic lineup will play a reunion show on Saturday, July 5, at Now That's Class (11213 Detroit Avenue).

"Face Value had their share of ragers, both in the band and in the audience," recalls guitarist Aaron Melnick, who played with contemporaries Integrity. "A lot of the younger people I know on the West Side might not like Integrity, because they were too metal. But they love Face Value."

Face Value featured members from all over Ohio, coming together from the remains of the Bagmen after Tony Erba replaced frontman Don Foose, who left to front the Spudmonsters.

Inspired by "posi" (as in "positive") hardcore bands like 7 Seconds and raw-throat metal like Motörhead, Face Value played Flashes and the Babylon regularly, opening for visiting bands like Slapshot and Government Issue.

In 1990, California's Conversion Records released the Coming of Age EP, which was later reissued by hardcore stronghold Revelation Records. After two albums and a single, Erba left the band in 1993 and went on to play in the H100s, the Cheap Tragedies, and Amps II Eleven, which Scene readers voted rock band of the year in 2005. The Virgin Destroyers' Tommy Viets replaced Erba for a European tour. Victory Records released Face Value's 1995 swan song, the rock-ier Choices, which featured Erba clone Jeff Desterhaft and Victory Flag/Mutant Soldier guitarist Greg Van Krol.

This week's show was planned as a release party for a compilation on Chicago's Smog Veil Records. The CD/DVD set, tentatively titled Rode Hard, Put Away Wet, is now slated for fall release. It collects Coming of Age, 1991's Price of Maturity, demos, and select tracks from 1993's Kick It Over. The video includes live footage and performances of never-recorded songs.

"Face Value is the best Cleveland example of a particular subgenre of punk rock," says Smog Veil President Frank Mauceri. "Plus, Tony's an obvious loudmouth, fitting in quite nicely with a long evolution of loudmouth singers in Cleveland punk-rock history."

"We're going to see if there's enough interest to keep playing sporadically around the Midwest," says Erba. "If we can dodge wives, work, and heart attacks."

• Kev Blaze's full-length debut continues hovering in record-company limbo, as EMI restructures once again. Even though the Cleveland R&B and hip-hop artist's CD is still unreleased, his career is growing at the grassroots level. The record's first single, "Watch How I Do This," has appeared all over YouTube as the soundtrack to a series of viral videos by helium-voiced motormouth Fred. Check it out at www.youtube.com/fred.

• Akron rapper K.C. has remastered last year's funkalicious Step Back or Get Stepped On. Featuring guest appearances by rhymers like Team Tuck's X-tro, the new version of the CD includes some new tracks and is available as a foldout digi-pack. Visit www.myspace.com/da1kc for more information.

• Canton metalcore crew Inhale Exhale has posted "Drink Till We Drop" online at www.myspace.com/inhaleexhale. The rocking and brutal "Drink" is the first single from the group's new album, I Swear . . . It's the band's second record on Solid State, an imprint of Seattle's major-indie Christian label Tooth & Nail. The group includes former members of Narcissus.

• DJ misterbradleyp has released The Stepper, a 12-track mix of club jams. From Gucci Mane to Digital Mystiks, the bpm roller-coaster ride runs through hip-hop, booty, dubstep, and back. Visit www.myspace.com/misterbradleyp for more.