A Cleveland musician crafts a musical of unrealized promise. 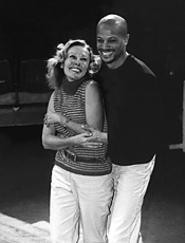 Cleveland theater is run on the same principle as Pier 1 Imports. A recent shipment of Radio City Rockettes is ringing up record grosses. Every neighborhood has its own Annie or Scrooge, and in Lakewood, where the mistletoe is laced with sexual ambiguity, the designated Sugar Plum Fairy is a 1998 off-Broadway Teutonic transsexual named Hedwig.

Only the folks from Dobama Theatre, temporarily roosting at Cleveland State's Factory Theatre, have the nerve to try for a genuine Cleveland Christmas surprise, a home-grown work ornamented with local talent.

Full Moon, a deeply flawed but fascinating creation, has a score and book by Mike Petrone, a local jazz pianist who leads a trio that keeps night spots jiving with Rat Pack insouciance. He is a successful musician of awe-shucks humility and Arrow Collar good looks. In the Harry Connick Jr. tradition, Petrone successfully dabbles as a composer, actor, and musical performer. For the last two and a half years, he has been incubating a concept worthy of Dali's surrealist paintbrush.

The work has the intricacy of a maze and must be traversed with great care. The main figure is the ghost of Einstein, portrayed as a wry, softshoeing meddler in human destiny. His goal apparently is to control events so that a baby will be born; into this baby he plans to reincarnate. Petrone has set the piece in a phantasmagorical cemetery, populated with monuments that periodically come to life to engage in song and dance and amusingly comment on the action.

In its initial reading at Dobama a year ago, the jazzy Harold Arlen-flavored score and fanciful book previewed a work that seemed to offer unlimited potential for enchantment. In this fully staged realization, however, director Frank Dunlop has pushed the work into a state of schizophrenia, madly shifting between a delicate whimsy and a dark nihilism of murder and mayhem suited to the dictates of film noir.

This musical is at times a daunting affair. Under ideal circumstances, it would be a welcome fantasy in The Fantasticks mode. But with Dunlop's heavy-handed interpretation, it gets buffeted between airy delight and soggy pretentiousness.

It commences delicately with pure puffs of charm as Ron Newell's Einstein, capped in cotton-candy wig, expounds scientific nonsense about the atom bomb in a wonderfully ludicrous Ludwig von Duck accent. Newell is the evening's raffish heart. The production comes magically to life as he sings and dances a "Tea for Two"-like ditty, about the endless possibilities of science and genetics, with his devoted colleague Alice Scorpio (Maryann Nagel). In this number, they personify macabre delight, much like Charles Addams's droll New Yorker ghouls. When the statues serenade this wondrous couple, they turn Einstein's theory of relativity into a lyrical musical chant.

Twenty minutes into the show, the tone turns rancorous. Suggestive of the Patty Hearst kidnapping, the plot deviates into a dark corner when a thug enters the cemetery with his hostage in tow. Kyle Primous plays the kidnapper with an edgy sleaziness; Cassandra Vincent's kidnapped heiress has a slinky, desperate duplicity; and Curt Arnold, the unwilling sidekick, displays a moving vulnerability. All three perform valiantly in roles that are conceived too realistically for the Oz-like fantasy that has preceded them. They seem to have wandered onto the wrong set.

Paralleling the action, the heretofore cheeky jazz and blues delights of the score congeal into banal wallows of self-pity ("How could I fall with my back against the wall?"). It is only when Einstein and the rest of the fantasy elements return that the show recovers its effortless charm.

Ultimately, this musical has a 1-to-1 ratio of accomplished flights of imagination and frustrating misfires; the piece is never able to reconcile its conflicting styles. Audiences that have seen both the reading and this unfortunate realization know the magic that has been sacrificed. With the exception of the more-than-adept cast and sprightly choreography by cast member Primous, there is little that follows through on the promise of Petrone's original. The sets, lights, and costumes never rise above the earthbound. It's Neverland stripped of its fairy dust.