Can a focus on regional foods return a restaurant to its glory? 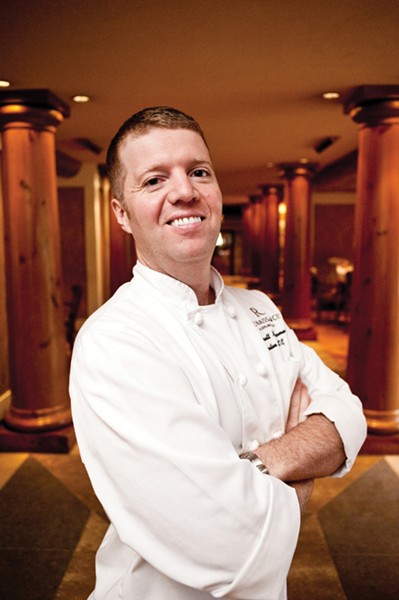 Brett Montgomery likes Cleveland: The people are friendly, the weather's been surprisingly decent, and he's duly impressed by our local food scene. For a Chicago native whose culinary career has taken him to New York, Hilton Head, St. Petersburg, Atlanta, and Houston, that's saying a mouthful. But his time here as executive chef of downtown's Sans Souci — nearly two years at this point — hasn't exactly been a walk in the park.

Chief among his challenges: How to rebuild the buzz for a 20-year-old hotel restaurant with an image problem?

"It's tough," Montgomery says thoughtfully. "In a town with a vibrant food culture, the restaurant had this perception of 'special occasion only.' On top of that, you have hotel guests looking for familiar dishes — the steaks, the burgers — and the locals who want to experience a dining adventure."

While that dichotomy is common among virtually all hotel restaurants, it seems particularly ironic at this one: At one time, after all, Sans Souci was considered among the city's top dining destinations. That glory came thanks in no small part to former executive chef Claude Rodier. A protégé of famed French chef Roger Vergé, Rodier was once called "probably the city's best chef" by no less an authority than Cleveland-based food writer Michael Ruhlman.

Of course, lots has changed since those days: formal dining is out, casual noshing is in, and Michael Symon, Rocco Whalen, Jonathon Sawyer, and their fellow culinary hotshots have long since turned the Cleveland restaurant scene on its head.

All of which has left Montgomery with the bittersweet task of forging a new path for Sans Souci: a still-lovely destination, with its snowy linens, sunny French Provençial decor, and big windows overlooking the bustle of Public Square.

Happily, the well-seasoned chef seems equal to the job. One part of his strategy involves ensuring quality: rededicating his team to crafting flawless stocks and soups, velvety sauces, and made-from-scratch desserts. The other part calls for reimagining his menu as a showcase for local foods.

Likewise, Ohio City Pasta is Montgomery's choice for fresh linguine, ravioli, gnocchi, and custom-made pierogi in flavors that change with the season.

"Instead of hurrying to make them ourselves," says the chef, "I thought, 'Let's bring in a good product from a local source.' That way, we can focus on really getting back to the basics and maintain the highest quality."

Not that any of that would matter in the hands of a mediocre talent. But as an accomplished chef, the graduate of Paul Smith College in New York's Adirondacks treats his fine ingredients with the respect they deserve. That means addressing them with meticulous technique, then placing them in the service of a big, wide-ranging menu that changes with the seasons.

Weary road warriors will still find ubiquitous crowd-pleasers like New York strip steaks and Atlantic salmon. But for those seeking a taste of Cleveland, there's also a delicious Lake Erie walleye: lightly dredged in a flour-and-egg wash, pan-seared, oven-finished, then settled on a plate with roasted cauliflower, fingerling potatoes, and locally made feta. A swoosh of tongue-tingling citrus reduction adds the final touch.

Among the apps, petite crabcakes with a bright lemon aoli are palate pleasing yet familiar. But a dreamy, creamy cheddar and smoked-bacon soup highlights the unmistakable notes of Great Lakes Brewing Co.'s Dortmunder Gold. The result is like an edible endorsement of Cleveland's culinary cred.

"We're gearing the menu to seasonal flavors and local ingredients," Montgomery says. "We're in a somewhat different situation than an independent restaurant on East Fourth Street, but I think we can still be creative and adventurous."

Montgomery could have added "price conscious" too. With entrées starting at $18 (for a vegetarian-friendly toss of plush asparagus-and-mascarpone-stuffed ravioli with wild arugula and marinated tomatoes) and maxing out at $31 (for filet mignon), the restaurant's price points have scarcely budged in the past decade. And probably more important: They appear to be in line with much of the downtown competition.

Speaking of value, the chef is quick to point to the menu's succulent braised shortribs: a meltingly tender portion of mahogany colored beef that Montgomery serves with fluffy horseradish-whipped potatoes and deftly roasted asparagus. (Turns out, Montgomery has a penchant for roasting fresh veggies — a welcome practice that brings out their natural sweetness.)

"At $25, the dish is a great alternative to a filet," he notes. "You can still have a hearty meal and not break the bank."

In addition to dinner service, Sans Souci is open daily for lunch, with a substantial roundup of salads, sandwiches, soups, pastas, and homemade desserts.

That last category includes a seasonal strawberry-rhubarb cobbler: a made-in-heaven mélange of juicy fruit, ephemeral streussel-topped biscuit, and a melting scoop of vanilla ice cream that put a sweet spin on a recent dinner visit.

Then there's the daily breakfast buffet: a ginormous spread featuring Amish cheeses and sausages from the West Side Market, along with smoked salmon, fresh fruits, cold cereals, homemade banana bread, Belgian waffles, and omelets that are brought directly to the table so there's no waiting at the cooking station.

"It's more than just an amenity for hotel guests," says Montgomery. "It's something that's worth coming downtown for."