Meet the cop who can't keep his pants on. 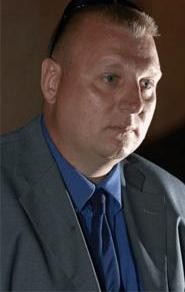 Paul Schweikert popped the disc into his computer, not sure what to expect. He looked again at the unsigned letter that had arrived with it in the mail.

"I have always supported you and your police, but this guy you have working for you is sick," it read. "If I got this off the internet anyone can -- kids and all. Don't you screen our cops?"

Schweikert, a trustee for Sagamore Hills Township, about 20 miles south of Cleveland, braced himself and opened one of the files.

Schweikert instantly recognized the man: Mike Massey, a township police officer. And this wasn't the first time he'd proved to be a problem.

A year earlier, Massey was busted for leaving Sagamore Hills to join the pursuit of a stolen car in Northfield Village. He deployed his police-issue stop sticks to flatten the stolen car's tires. But in the process, the spikes also disabled two police cruisers from neighboring departments. They demanded that Sagamore Hills reimburse them for the damage.

Sagamore Hills Police Chief Rudy Phrne fired Massey, claiming that he had acted recklessly and without permission. But an arbitrator reduced the firing to a suspension.

"I'm blind in one eye," Schweikert says. "It hurt my other eye."

He told them that he'd been set up. He knew the woman as a waitress from the Cannery, a favorite local restaurant.

"Let's face it," Massey says. "There are a lot of women out there who just want to fuck a cop. That's all they want. We call them 'badge bunnies.'"

Yes, Massey allowed himself to be recorded in his uniform shirt, he says, but it was at her request. And it was meant to be a private show; he certainly never thought she would release it.

"She's sitting there with her legs up in the air in front of the camera -- what do you think, at that stage?" Massey says. "I mean, you're a guy. Sometimes you let your judgment lapse a little bit. And I don't think a minor lapse in judgment of a private thing should be publicly exposed."

After reviewing the sheriff's report, the county prosecutor determined that Massey hadn't broken any law, says chief legal counsel Mary Ann Kovach. "It's not a crime. A lot of people have that stuff."

But Chief Phrne remembered that someone else had once accused Massey of cybersleaze. In 2005, right before Massey was fired for the stop-stick incident, a woman had filed a complaint alleging that he had e-mailed her a picture of his penis.

At the time, the case was dropped for lack of evidence. The woman had a picture of a penis, but there was no way to prove it belonged to Massey.

But in addition to the video clips, the computer disc mailed anonymously to township officials also contained a picture of a penis. Phrne compared it with the photo the woman claimed Massey had e-mailed to her. They matched perfectly.

Armed with the genital mugshot, Phrne accused Massey of "conduct unbecoming an officer of any police department" and fired him.

Massey says he's the victim of a conspiracy by two township officers who disliked him and worked with the two women to discredit him.

"Everybody that works there is trying to stab everybody else in the back," Massey says. "Nobody's got enough balls to come up and say something to your face."

It's a convenient theory, but Massey's employment history suggests that he often lets his personal life interfere with work.

In March 1995, when Massey was an officer with the state highway patrol, he was suspended for running the license plate of a car parked in his ex-fiancée's driveway. Investigators claimed that he wanted to learn the name of her new boyfriend. Not so, he counters. He just didn't recognize the car and was worried about her safety.

Seven months and a second suspension later, Massey thought his then-girlfriend was cheating on him with two other men. He called one of them, a firefighter, to set up a meeting.

On the appointed date, Massey arrived at the fire station dressed in his highway patrol uniform. Massey showed the firefighter a calendar on which he had marked the dates he had been with the girlfriend. The fireman later told investigators that Massey had "basically called her a lying bitch and a whore." The patrol fired him.

In September 2003, Massey was named acting police chief for the village of Creston. But soon after, Massey claims, the village council turned against him.

So when he was passed over for the full-time police-chief job, Massey again suspected a conspiracy.

After all, Mayor Ron White had even gone so far as to send copies of Massey's America Online profile to council members in an effort to spike his chances. Among the hobbies Massey listed: "passionate sexual encounters with women only."

So Massey sued Creston, claiming that the village council had retaliated against him for aggressively doing his job; he was investigating several council members for various alleged crimes, none of which ever resulted in charges. The case is still pending.

Sagamore Hills, meanwhile, awaits a second arbitration to determine whether Massey's firing will be upheld. But Township trustee Schweikert says that he has already learned his lesson:

"The next person that gets hired -- I want to see the background check."