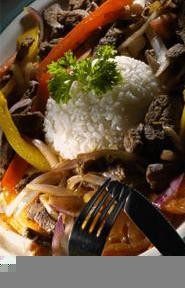 I've never been to Peru, but my taste buds have -- thanks to Eryka Accordino and her new downtown restaurant, Machu Picchu. That's the joy of traveling by tabletop: Easy and inexpensive, it's an opportunity to explore the culture and cuisine of some faraway land without a suitcase and customs check. And settled inside the City Club, Accordino's casual, mid-priced Peruvian restaurant -- Northeast Ohio's first -- makes for a memorable destination.

Named after the "lost city" of the Incas, Machu Picchu focuses on the fare an actual traveler might find on a table in any Lima kitchen: simple, flavorful, and influenced by traditions ranging from Native American to Spanish to Chinese. (Peru, it turns out, is home to one of the Western Hemisphere's largest and oldest ethnic Chinese communities.)

Machu Picchu's food won't be mistaken for novoandino cuisine, the blend of classical French technique and traditional Peruvian ingredients that's taking hold in elite kitchens. But it is fresh and authentic, prepared by a professionally trained Peruvian chef, Medalit Alejandro, who also happens to be Accordino's aunt. For Accordino, who grew up in Cleveland, the restaurant is an opportunity to share her beloved heritage; for us, it's a chance to solve some culinary mysteries, such as what the heck is Inca Kola?

Turns out, it's a wildly popular bubble-gum-flavored soda that, since its launch in the 1930s, has grown to dominate its market, making Peru one of only two countries in the world where a native soft drink outsells Coke and Pepsi. Finally figuring that it couldn't beat Inca, Coca-Cola joined up with the original producer in the late 1990s; today, the startlingly sweet beverage remains a staple, particularly in the country's Chinese-Peruvian restaurants, or chifas.

Also, we discovered, it goes swimmingly with the giant kernels of crunchy, pan-fried corn that appear on Machu Picchu's tables nearly as soon as diners are seated. Lightly salted and olive-oil sleek, these toothsome morsels could become a bad habit -- as long as you keep a beverage on hand to counteract their dryness.

Of course, Pisco Sours -- the country's other so-called "national drink" -- can do the trick too. Sporting a creamy cap of cinnamon-dusted egg white, the boozy blend of pisco (a Peruvian brandy), sour mix, and lime juice tastes much like a sweet margarita and goes down with deceptive ease.

Lime juice plays an essential role in all sorts of Peruvian preparations. It shows up twice, for instance, in the lush tilapia ceviche, once as the marinade for the mild fish and again in the zesty, red-onion salsa criolla that accompanies it. Lime also piques the exotic yellow "mustard" sauce that enlivens several dishes. Name notwithstanding, the concoction has nothing to do with Colman's: It's a traditional blend of hot yellow peppers, lime juice, and crackers (for texture) that brings haunting complexity to everything it touches. Toss in some of the Peruvian herb huacatay, and you get a green version humming with overtones of basil and cilantro.

Both sauces are deliciously versatile. The yellow one adds nuance to the "gravy" draping a simple starter of boiled potatoes (papa a la huancaina). And when an entrée of sudado de camarones (a toss of sautéed shrimp, red and yellow bell peppers, onion, and tomato) seemed a little bland, we ordered up a side of huacatay sauce and solved the problem, pronto.

Of course, no journey is entirely glitch-free, and we would be exaggerating if we said our Machu Picchu adventure was perfect. For one, be aware that what the menu calls "steak" -- as in the steak with cilantro sauce and soft Peruvian canario beans (seco de carne con frijoles) -- we probably would call "pot roast." Likewise, flank steak, not filet, was the featured beef in the lomo saltado, a playful chifa standard that calls for ladling the stir-fried meat and veggies onto French fries and serving it with rice; predictably, though, it gave our jaws a workout.

Other snags included the well-seasoned, crisp-skinned, but overcooked rotisserie chicken and a tasty papa relleno -- mashed potatoes wrapped around a slightly sweet filling of ground beef and raisins, then deep-fried -- that could have been even better with more filling.

An unpolished if well-intentioned Friday-night waiter didn't add much to our enjoyment either. But perhaps the biggest disappointment came from the bland, dated decor, which is mostly left over from the former occupant, the Pewter Mug. The meandering space cries out for an infusion of colorful Peruvian art, crafts, and textiles. Accordino promises that will be accomplished later this year, when she adds a gallery and souvenir shop.

Rough spots aside, though, when journey's end finally arrived -- in the form of creamy, cinnamon-scented rice pudding and a wedge of strawberry torta helada, a colorful stackup of cake, whipped cream, and gelatin -- we felt a little blue. Tabletop travels are always a treat; but when they taste this sweet, we wish they would go on forever.