The pain is muted so the love goes limp in Tri-C's The Fantasticks. 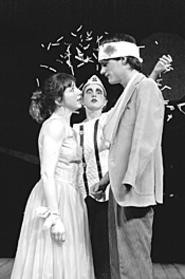 Writers have tried from time immemorial to capture the essence of young, innocent love. And why not? There's something fresh and ineffable about people harpooned by Cupid's darts, and legions of audiences who want to re-create that gloriously sappy feeling they once had. For even when two people stay in love over decades, nothing can match those first pangs of uncertainty and passion that pulse in a lovesick teenager's heart.

Almost half a century ago, Tom Jones and Harvey Schmidt wrote The Fantasticks, a deceptively simple but quite profound musical about two love-blind sweethearts. Borrowing liberally from Shakespeare's Romeo and Juliet, the show opened in a little theater in Greenwich Village and stayed for the next 42 years -- sublime testimony to the power of a love story well told. This is an evergreen that keeps appearing on local stages, and it's now being presented by Cuyahoga Community College's Western Campus Theatre Department. Far from a definitive staging of this modern classic, the Tri-C effort focuses on the sweetness of the script while never really plumbing the despair as well as it might.

In the first act, love is in fervent bloom as adolescent Luisa and Matt, next-door neighbors separated by a wall, explore their yearnings for each other. Little do they know that the wall is part of their parents' plan to pair them up, since the old folks are hip that their offspring will eagerly overcome any obstacle put in their way. The parents, Bellomy and Hucklebee, explain all this in a song, "Never Say No," that is a comic gem and can serve as a parental guide in any age.

The story is nudged along by the narrator, who also plays El Gallo, an exotic adventurer who sells the parents on a "rape" (as in abduction) of Luisa, so that Matt can intervene, become a hero, and sweep Luisa even further off her feet. El Gallo's song laying out the various rape options available, "It Depends on What You Pay," is both witty and a little startling, unless you keep reminding yourself that he's not talking about that kind of a rape.

One of the enduring attractions of The Fantasticks is that all this lovey-dovey stuff slams into a brick wall in the second act, when the cuddly couple is suddenly embroiled in various disagreements in the illusion-piercing tune "This Plum Is Too Ripe." From there, El Gallo sends Matt away on a tour of worldly realities, while back home, Luisa watches from afar as many of Matt's tortures seem to be just pretty-looking episodes. Eventually, the two snuggle bunnies are reunited, their love "burnished by the sun," and begin again to discover their feelings in a deeper and more meaningful way.

Courtney Schloss is an appealing Luisa, possessing a charming singing voice and an awkward cuteness that gives this 16-year-old more depth. It's hard not to swoon with her as she echoes the adoring words of her beloved, claiming "I am love!" with the innocent brashness of youth. Playing opposite her as Matt, Joseph M. Haladey III is raw-boned and earnest, but a bit too stiff to ignite a love that burns so brightly. Once he strengthens his pipes and learns to sing the meaning of the words as well as the notes, his musical performances will gain added dimension.

As El Gallo, Robert Burian has a rich baritone that resonates nicely on the enduring classic "Try to Remember," and he has some lithe moves, but he never delivers the threatening mystery at the core of his character. With his short haircut and frat-boy openness, he looks almost as inexperienced as Matt. Patrick Carroll and Jeanette Luli have some delightful moments as the parents, but their songs -- which also include the amusing "Plant a Radish" -- feature some seemingly underrehearsed choreography that dampens the crisp lyrics.

This production goes sadly off the rails when the old actor Henry and his sidekick Mortimer appear out of a wardrobe box. These two are supposed to be comic relief, but Ron Linck is oddly subdued as Henry, a role that virtually begs for bloviated overacting. And Jeff Dicenzi as Mortimer, while essaying an acceptably overdone death scene, otherwise barely registers as an eccentric thespian.

Director Arthur Grothe has staged a pleasant rendition of this well-loved piece, but has avoided taking the staging chances that could have made it more memorable. (For example: The mute, played with spirit by Edie Hitchcock, is directed to be too much of an imitative, shopping-mall mime.) Because this production softpedals the pains that Matt and Luisa endure, their resumed love affair loses the depth so perfectly expressed in the lyric: "Without a hurt the heart is hollow." In this production, the hurt itself is hollow, and that denies us the resolution we desire.