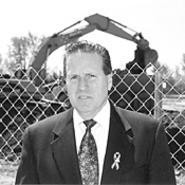 He didn't want to sell. The Monreal Funeral Home had been at Vine Street and Route 91 for 27 years, and Bill Monreal had built a clientele. Plus, the City of Eastlake was offering only $700,000 -- not the $4 million Monreal thought would be necessary to buy land, construct a new home, and move his business.

But Eastlake insisted that it needed Monreal's land for a baseball stadium. An Indians Class A affiliate would be arriving from Georgia in 2003, and the city had promised to build it a park. The only hitch was getting title to 14 acres, which belonged to Monreal and his neighbors.

After some haggling, 25 landowners agreed to Eastlake's price. But there remained four holdouts, including Monreal. So in April 2001, the city filed suit, and a jury ordered Monreal to sell his land for $1.7 million. Other neighbors fared worse, but there was nothing they could do. Cities are allowed to seize land for a public purpose, and baseball seemed to fit that.

Yet five months later, Eastlake City Council did an about-face, agreeing to sell part of Monreal's land and three neighboring sites to a pair of developers. It may eventually be a hotel, restaurant, or office complex, council members say.

Eastlake Mayor Dan DiLiberto says that landowners were long aware that the land was slated for a separate development. Monreal, however, was shocked. In court, the city had "specifically set forth that this was for the stadium," says his attorney, Melvyn Resnick. Now it appeared that Eastlake had used its powers to take land from one business and give it to another.

Moreover, the developers purchasing the land were the same people the city hired to negotiate deals with Monreal and his neighbors. And they would be buying the 1.7-acre site for a fraction of what Eastlake paid just five months before.

Monreal couldn't believe the city had fought so hard for his land, only to hastily sell it at a discount. "We were really confused," he says. "We thought, how can they take from one business and give to another? Where is the good of the people if you're selling to a private developer?"

Monreal and Resnick aren't alone in questioning the sale. Cities cannot take land without "full and clear disclosure in advance" on what the land's purpose will be, says prominent eminent domain lawyer Robert E. Manley, chairman of the Manley Burke firm in Cincinnati. The brokers' future involvement should have also been disclosed, he says. "It sounds like a conflict of interest."

"It sounds like a disgusting example of eminent domain abuse," adds Scott Bullock, an attorney for the Institute for Justice, a Washington, D.C. agency that specializes in eminent domain issues.

But Bullock concedes that the situation is not unusual. Under Ohio law, the rights of landowners often come second to a city's dream of fighting decay and increasing its tax base. The City of Lorain, for example, commandeered 60 homes and businesses to make way for a tony riverside housing development. Akron has announced plans to buy three homes and a restaurant to aid expansion of a Mercedes-Benz dealership.

Bullock believes governments are abusing eminent domain powers. The law permits cities to take land only for a public purpose. This, he asserts, should mean things like roads, parks, or municipal buildings. Baseball stadiums might fit as well, but it's difficult to make a case for a private retail development.

Then, last month, Malinowski and Herrera signed a contract with Eastlake as a separate company, "Vine Street Partners LLC," announcing their intent to purchase and develop 1.7 acres of the land they had helped Eastlake buy. Although the sale isn't final, Eastlake City Council gave it unanimous approval April 23.

Ohio's real estate ethics code holds that brokers should not provide professional services on property where they have "present or contemplated interest," unless their interest is disclosed to all parties. But the canons are only something agents should aspire to, not rules, says Dennis Ginty of the Ohio Department of Commerce. Besides, notes Peg Ritenour of the Ohio Association of Realtors, "The city didn't have to sell to them if it didn't want to."

Speaking for the partnership, Malinowski insists no inside deal was made. "The city bought the land, and it placed it on the open market," he says. "We were bidding like anyone else." He declines comment on the negotiations or whether there were other bidders.

Council members say the deal sounded good to them. "That's prime land," says Councilman Ron Plumb, "and I'm sure there were a lot of people who wanted it."

Yet the purchase price hardly reflects intense competition. The developers agreed to pay $462,500 -- more than land in Eastlake typically sells for, but less than a third of what Eastlake paid for it five months before. Nor does the sale price cover the city's legal fees, the money it paid CB Richard Ellis, or the cost of demolishing the funeral home and a bank on the site, as it has promised to do.

Stan Leff of Stanmor Realty in Willoughby isn't impressed. It's hard to pinpoint the land's value, since the stadium has caused real estate prices to fluctuate wildly. But he notes that it's close to a highway interchange at one of the busiest corners in the city. "If they sold that for $462,000, and it's all frontage, I don't think that's very good," he admits. "I don't think the mayor did his constituency any good by that."

DiLiberto isn't pleased with questions about the sale. The baseball team will eventually pay Eastlake back for the entire 14 acres, so the developer's purchase price doesn't matter, he says. "There's a certain point where a developer cannot reap all the costs. We're trying to stimulate the market. The stadium will do that, and so will this development."

DiLiberto says he talked to other prospective buyers, although he offers no details. The law doesn't require formal bidding procedures, he snaps. "You sound like you're on a little bit of a witch hunt here. We lose nothing. We're getting our money back."

City council members also believe the sale is good for Eastlake, though they're at a loss to explain why.

Councilwoman Lynn Moon Curtis says she doesn't have the numbers to prove Eastlake isn't losing money on the deal; she just knows it isn't true. Councilman Bruno Razov doesn't have the numbers either, but suggests there was good reason for the price. "Everything's accounted for," he says. "There's no reason to be a conspiracy theorist. I wish I could explain it to you, but I can't, because we discussed it in executive session." Plumb says he's sure the city talked to numerous developers, but he doesn't know who.

Law Director Ted Klammer offers the most curious explanation. He argues that Eastlake won't be selling at a loss, since exact boundaries of the land have yet to be determined and may include only a small fraction of Monreal's land. "You're not comparing apples to apples," he says. Yet this also implies that the city agreed to a price without exactly knowing what land it's selling. Klammer won't elaborate: "There's a number of things that come into play that I can't get into with you."

Council members argue that the deal is but a small part of greater ambitions. "We didn't agree to build the stadium because we're looking to be in the baseball business," Razov says. "We're looking to redevelop Vine Street. And that's what this is all about."

In the meantime, Monreal is trying his best to keep his funeral home going. He admits the situation has been a nightmare. His old mortgage was $600,000; he expects the new one to rise to $1.8 million, even after using the city's payout as down payment. He's not sure the new building will be ready by the time he needs to leave the old one.

"I had angry moments months ago, but I'm past that," Monreal admits. "I'm trying to move on, build this building, and get on with my life." He does plan to carry his fight to Columbus, where he hopes to lobby the state for better eminent domain laws.

Monreal's quest has some support there already. On May 15, the Ohio Senate approved a bill adding protections for property owners, including a clause requiring governments to take land only for clearly defined public purposes. Governor Taft is expected to sign it into law.

State Representative James Trakas (R-Independence) says it's designed to halt the most egregious examples of eminent domain, like government agencies seizing land in case they need it years later or lowballing landowners and daring them to fight it.

"The good news is that Ohioans finally get some of their property rights back," Trakas says. The bad news is that it's too late for people like Bill Monreal.