Between The Rock and a hard place, The Rundown isn't so bad. 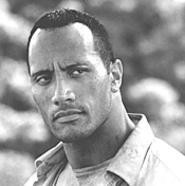 The script for The Rundown has lingered for more than a decade and was originally a Patrick Swayze vehicle, well before those wheels fell off. Universal Studios revived it because the studio knows what it has in Dwayne Johnson: a gold mine made of bulging biceps, a man who was a formidable franchise as wrestling superstar The Rock before he made his way onto movie screens. The studio, for which he works like a 1940s contract player, has made sure not to render him parody or putz; he's no Hulk Hogan offering tainted treats to the kiddies, no Roddy Piper chewing up and choking on B-movies. Universal has no intention of squandering a man who's made more money waggling his eyebrows than Groucho Marx ever dreamed. The Rock graduated from Vince McMahon's acting school with highest honors, and his commencement present is a movie co-starring Rosario Dawson as the only rebel leader ever to sport eyeshadow and Trainspotting's Ewen Bremner as an indecipherable bush pilot.

The Rundown, in which he plays a mercenary named Beck doing dirty deeds for hard cash, is no more than a passable diversion, a live-action cartoon in which things go boom and nobody bleeds, even when rendered machine-gun Swiss cheese or pummeled by the flying fists of a dozen natives swinging from ropes. It's a summer movie released in early fall, sent into theaters after the explosions of July and August have simmered down. Expect nothing, and you will be rewarded kindly, especially by Christopher Walken as a tyrant who apparently has an entire South American country digging for gold in the computer-generated canyon behind his hut. Walken hasn't acted in decades, choosing instead to offer up the best Christopher Walken impression on the planet.

What's most revelatory about the movie, which finds Beck dispatched to the Amazon to return a conniving fortune-seeker named Travis (Seann William Scott) to Los Angeles, is Johnson's performance -- as in, he actually gives one. In his first role, in The Mummy Returns, Johnson didn't even speak and was seen for a few taunting seconds; in his second, as the title character of last year's The Scorpion King, he said next to nothing and wore even less. The Rundown was being developed for him even before he'd finished filming The Scorpion King, and it's his first real attempt at holding a movie, which he does -- in a choke hold. You can smell what The Rock is cooking: a career in the movies, and it is well done.

The film, directed by once-and-future actor Peter Berg of Chicago Hope, aspires to be nothing more than an Indiana Jones knockoff, replete with villains wielding bullwhips and gold statues obscured by deadly puzzles; it travels a familiar dirt road that looks more like a rut and feels just like a ditch. But Johnson keeps it engaging, displaying a comedic knack first revealed during his Saturday Night Live appearance in 2000; he has the timing of a Rolex, even when playing straight man to American Pie's Stifler. For her part, Dawson speaks in an accent that suggests she's the only Jamaican in South America; little wonder she acts like a woman who lost her compass.

So it's left to Johnson to keep the movie from flying into the breeze like refuse, and he does, only because he's genuinely witty and not afraid to try anything once. (In one scene, he devours a hallucinogenic fruit that renders him paralyzed; he's unable to speak and can only mumble, which, for a man who's made a fortune delivering smackdown soliloquies to arenas, is awfully funny.)

Early in the film, Beck strolls into a nightclub to shake down a college football star who's late on paying a gambling debt. The techno music booms, the neon lights blind, and what happens next is fleeting and bewildering, but unmistakable: As Beck walks in, he bumps into an exiting Arnold Schwarzenegger, who turns to Beck, grins, and says, "Have fun." Beck responds only with a puzzled look, a delighted what-the-fuh? -- maybe Beck didn't understand what he said, or perhaps he thought Arnie was on the campaign trail trolling for the disco vote. But what's perfectly clear is that the passing in the hallway is a passing of the torch. The Rundown, which aims to beat a laugh out of you, is the kind of film Arnold would have made early in his career, maybe after Raw Deal, which The Rundown isn't.