Vin Diesel moves in, and the laughs move out. 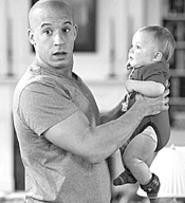 Based on the success of their TV work, beloved among those who swim in the deep end of bongwater, Lennon and Garant have done considerable rewrites on scripts considered not funny enough (Starsky & Hutch, among others). But their films suggest the duo are better suited to projects that don't actually use scripts; Garant and Lennon also wrote last year's Taxi, which made an obscenity of the phrase "Jimmy Fallon star vehicle." The Pacifier is no less dreadful.

To suggest that it's a disappointment simply because Lennon's and Garant's names are attached to the project would reveal unforgiving naïveté; it may well have been a terrific script till it fell into the soft hands of director Adam Shankman (Bringing Down the House and A Walk to Remember) and desperate Disney execs trying to save a crumbling kingdom. Ultimately it has the stink of a movie made by committee, a product focus-grouped till it's bland enough to appeal to everyone and no one at all.

It's also a bizarre hodgepodge of influences: Kindergarten Cop meets Sound of Music, filtered through the Hulk Hogan movie Mr. Nanny. Its plot -- in which a gruff hater of children comes to bond with a house full of troubled kids, to whom he teaches the meaning of life and love -- is so threadbare, it couldn't hold a soap bubble. The formula, by now so overused it's actually formless, is pure Disney: At the movie's beginning, a scientist named Howard Plummer is rescued by Lieutenant Shane Wolfe (Diesel), then promptly executed off-screen; he's Bambi's mommy, cannon fodder whose death sets the plot in motion. But the plot is merely a math equation: Five kids + one tough bastard = group hug before closing credits.

Shane's assigned to protect Plummer's kids while his widow goes to Switzerland to find her late husband's research -- which, of course, is vital to national security. At first the kids resist his barked orders, but they eventually warm to each other. There is also the requisite love interest: Gilmore Girls' Lauren Graham as the school principal, a former Navy officer who still digs a man in uniform.

The Pacifier will perhaps be remembered as the first family comedy in which the North Koreans show up as the bad guys; turns out they pay better than the American government, says Shane's higher-up as he points the pistol at his pal. Also, for the kids, there are several uses of the word "hell," the discovery of a swastika armband in a high school locker, and a scene in which an underage driver leads the cops on a high-speed chase through a residential neighborhood. Please, for God's sakes, somebody dial 911. The Pacifier, starring the human battering ram Vin Diesel as a Navy S.E.A.L. ordered to protect five kids from baddies out to steal their dead dad's invention, was written by Thomas Lennon and Robert Ben Garant, two members of the defunct MTV comedy troupe The State. Lennon, however, is best known as the blond-highlighted, neatly mustached Lieutenant Jim Dangle, a gay Steve McQueen in short-shorts, on Comedy Central's improvised Cops-mock Reno 911!, where Garant also stars as redneck Deputy Travis Junior. Garant and Lennon co-created the show, a dead-on workplace comedy in which the lunatics not only run the asylum, but also carry loaded weapons to work.