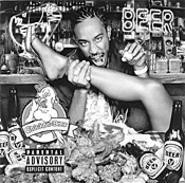 In the grand pantheon of guilty pleasures, Chicken and Beer ranks right up there with Häagen Daz and Hustler. But for the third time, Ludacris brings another round of deep-fried reefer rap, where subtlety is as taboo as sobriety.

The Atlanta MC remains preoccupied with gangsta grossouts, forsaking southern gentility in favor of rhymes about burping and farting. Luda's mouth-of-the-South shout is balanced well by Kanye West's vibrating voodoo beat on the fierce first single, "Stand Up," a club banger that's already heating up the charts. Even better is "Hip Hop Quotables," a classic Erick Sermon-produced diss track aimed at no one in particular. "I buy cars with straight cash/Have meetings with Donald Trump," Luda spits. "Y'all meet with Honda/No payments for 12 months." "Diamonds in the Back" adds some satin to the sweat, the rapper slowing to a stoned drawl, stretching syllables the way he stretches the truth.

There's loads of filler here too -- namely the 2 Live Crew-castoff "P-Poppin'" and the thug anthem "We Got," where Luda grabs his gat . . . and fires blanks. Through it all, though, he brings enough dumb, lewd fun to qualify as an honorary Farrelly brother. Chicken and Beer's a great time, if not a great album.