Lunch in the Fast Lane

A pair of perfect breaks from the workaday world. 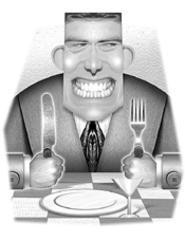 A fine-dining dinner is dandy. But there are days that call for a lunch-hour extravaganza. We're not talkin' brown-bagging it here. Instead, when we want to impress an out-of-town cousin, kiss up to a colleague, or simply treat ourselves the way we should be treated, there's nothing like lunch at a great restaurant. Not only are reservations generally easier to finesse than during the dinner hour, but prices are lower, portions are typically more sensible, and you've still got hours ahead of you to burn off the calories. And so what if the fates demand that you return to work afterward? Where's it written that a salutatory glass of wine won't make you a happier and more productive cube farmer?

We liked Marlin Kaplan's sophisticated downtown dining room from the day it opened in 1999. But when we returned recently for a midweek lunch, we fell in love. Somehow, the smart deco decor seemed more embracing than we had remembered and the food more arrestingly sublime. Perhaps, as a companion suggested, One Walnut's essence -- a by-product of the artistry that is continually lavished on its every aspect -- is starting to assert itself now, giving the interior a patina of charm that was still unrealized when the space was brand spanking new. Or perhaps we've just been around the block often enough at this point to appreciate the best when we see it. But in any case, lunchtime here is a dream.

Kaplan has a gift for combining serious food with a lighthearted attitude. Take, for example, the popular Lobster Nachos, a tantalizing starter that is even more delicious than its tongue-in-cheek name would suggest. From the succulent lobster claw meat to the satiny guacamole, drizzled with a bit of sweet soy reduction, to the madcap triangles of crisp pastry that substitute for tortilla chips, the dish is an inspired pairing of tastes and textures, nearly as much fun to contemplate as it is to eat. Likewise, who but Kaplan could have created the fabulous Black and Blue, a heavenly matchup of carpaccio-style seared rare beef with a crosshatching of horseradish mayo and creamy blue cheese, all topped off with a pouf of tender greens and some fragrant pickled ginger? Think he's gone overboard? Just taste it.

The interplay of the familiar with the fantastic continues with the lunch entr´es -- items like a shrimp casserole topped with a homey buttermilk biscuit and that American icon, an open-faced meatloaf sandwich. But despite their simple roots, these aren't your mama's handiwork. Consider the meatloaf plate, with two tender slices of savory ground veal, pork, and beef resting jauntily against a featherbed of piped mashed potatoes, drizzled in a heady brown "gravy," and sided by slim haricots verts. Papa should have been so lucky.

The restaurant's West Coast wine list is compelling enough to overcome any lunchtime intentions to teetotal. Should a bottle -- or even a half-bottle -- test your limits, rejoice in the compact selection of wines by the glass, well-matched to Kaplan's all-American fare, with a mellow Ravenswood Zinfandel ($8) to wash down the meatloaf, for instance, and a crisp Robert Pecota Sauvignon Blanc ($7.50) to go with the nachos. And of course, the bar is fully stocked any time of day with the makings of your favorite cocktails.

And then there is dessert, which on this day included an incomparable flourless chocolate espresso torte: a fudgy tour de force dabbled with espresso crème Anglaise and tweaked with a bit of whipped cream; and a silken crème brûl´e, which must surely have been the model of its kind -- beyond rich, with a fragile burnt-sugar cap that shattered nearly at a glance.

While One Walnut's noontime guests can probably get in and out in little more than the customary hour, it's also entirely pleasant to linger here over big bowls of coffee or an afternoon port, coddled by a staff as engaging and indulgent as any in the city. Their poise and perspicacity is commendable: Coats are whisked away (and reappear, as if by magic), courses come and go without interruption, and Mark Lurie, the dapper maître d', is likely to offer his hand to guests as they glide toward the exit. If such gracious midday treatment isn't enough to brighten your workday, it's time to consider another line of employment.

If One Walnut is a 1920s luxury liner, Beachwood's Moxie is an edgy port of call. All slick and industrially chic, the large open space, with its exposed ductwork, stainless-steel kitchen, and worn wooden floors, is more of a bistro than a bastion of the high life, and the appearance of the black-garbed waiters -- many with tattoos and shaven pates -- injects a rare dose of urban frisson into this affluent eastern suburb. Yet the sight of the lunchtime suit-and-tie crowd slapping backs and shaping deals, while ordering giant Moxie Burgers and imaginative salads from this cadre of ersatz bad boys, seems less incongruous than one might imagine.

Executive Chef Jonathan Bennett has pretty much picked up where former kitchen whiz-kid Doug Katz (now working on a place of his own on Shaker Square) left off, with a relatively brief midday menu of contemporary and creative soups, salads, sandwiches, and entr´es, many with a European accent. Don't look for french fries and ketchup here, for instance: That juicy Moxie Burger, slathered with melting cheddar, shaved onion, tomato, and romaine, comes instead with thinly sliced frites and a tangy herbed aioli.

There's also a lush salad of barely seared peppered tuna draped across a hillock of earthy soba noodles, streaked with colorful threads of carrot, red pepper, and fresh chive; a spicy sambal aioli -- a sort of Asian chile paste -- adds a bit of heat. A hearty grilled beef sandwich, with cooked-to-order tenderloin and rivulets of melted Brie, piled high on a wedge of herbed focaccia and served with glistening housemade potato chips, is suitably robust. And a bowl of goat-cheese-laced risotto, piqued with loads of meaty wild mushrooms and well-trimmed asparagus, then topped with three smoky grilled shrimp, is a champ.

According to our waiter (a pussycat, despite his abundant skin art, who was always there when we needed him), the days of freewheeling noontime imbibing have come and gone. Now, he says, only about a third of his guests order spirits -- mainly beer or wine -- to accompany lunch. Too bad, that, since Moxie's international wine list, by the glass, bottle, or half-bottle, is big, beautiful, and thoughtfully designed to add dimension to the dining experience. A glass of jammy Cline Ancient Vines Zinfandel ($8) was just the ticket with that grilled beef tenderloin, for example, and a Bettinelli Viognier ($8) added depth and roundness to the succulent shrimp risotto.

As for sweet endings, the damsels of Tatin would undoubtedly approve of Moxie's take on their famous upside-down tart, with its flaky pastry, slabs of slightly chewy, decadently caramelized apple, and a scoop of subtly cinnamon ice cream. And oh, that chocolate-pecan tart! A voluptuous marvel of sweetness, crunch, and crème Anglaise, topped with a snowball of to-die-for milk chocolate ice cream, this could easily become a new addiction.

Despite the almost-capacity crowd of midday diners, the kitchen keeps up a briskly efficient pace -- so that, while Moxie may be packed at noon, the East Side captains of industry can generally set sail within an hour of their arrival. In this kinetic spot, where nearly everyone seems to have Something Important to do after lunch, dawdling over a second cup of coffee can leave one feeling embarrassingly expendable. Better to head back to the job, then, fueled by Moxie's high-test food and drink, and hone that renewed appreciation for the finer things in life.