Sunday, October 28, at the State Theatre. 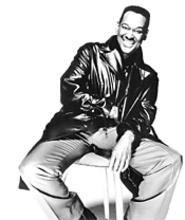 Luther Vandross has never had difficulty crossing over. At the same time, he has never lost his base in the black community. Since the Manhattan native began his professional career as sideman for David Bowie, Bette Midler, the Average White Band, and Barbra Streisand, Vandross has become known for his velvet voice, gender-free, unambiguous tenderness, and rhythmic versatility. He's been a big seller since 1981 -- when his Epic solo debut yielded the hit "Never Too Much" -- and has sold some 22 million albums. No doubt that number should swell significantly this year, as a deeply trimmed Vandross is back on the set with hot new product and ready, it seems, to rock -- at least as hard as an elder statesman of rhythm and blues should. Modestly called Luther Vandross, the new disc is Vandross's debut on J Records, the label launched by Clive Davis after the record industry mogul had a falling-out with Arista. The record allies him with Jimmy Jam and Terry Lewis, "Babyface" Edmonds, and Tamia boardman Shep Crawford. It spans the sensual "Grown Thangs," the pretty "Love Forgot," and "Take You Out" -- a party tune that evokes such Vandross favorites as "Bad Boy" and "Get It Right." "To me, R&B is the chicken my mother fried," he told Savoy magazine, which put him (in Armani, of course) on its November cover. "It's running to the store to buy a Jet magazine. It's dancing in the living room with my mother and grandmother while the Isley Brothers' 'Twist and Shout' . . . blasts from the stereo." Given Davis's record with Carlos Santana and sultry young diva Alicia Keys, expect to hear a lot of Vandross's stylish, crossover soul. It doesn't date.